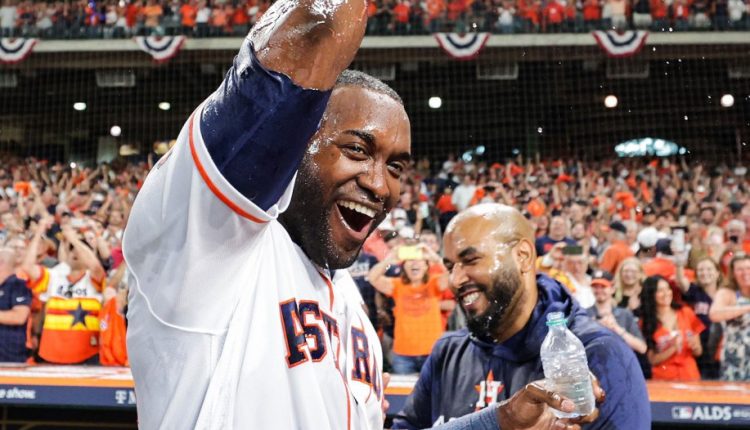 Can a swing be both unprecedented and unsurprising? Last Thursday afternoon in Houston, one of the two best hitters in the world answered in the affirmative.

By the bottom of the sixth inning in the second game of the American League Division Series, Seattle Mariners ace Luis Castillo had been staked a 2-1 lead against the Astros, and his form — almost-100 mph fastballs that settled on the strike zone’s ledges but veered variably en route, changeups like dips in a roller-coaster’s track — suggested the lone run was all he’d need. Then Yordan Álvarez strode to the plate, and the headwinds of inevitability shifted.

A day earlier, the Astros’ huge (and hugely dialed-in) left fielder had won Game 1 of the ALDS more or less on his own, cracking a two-RBI double in the third to get Houston on the board before walking things off with a three-run homer in the bottom of the ninth. An hour or so earlier, in the fourth inning, he’d just gotten under a fly ball to left — an out, and a warning shot. Now Castillo threw Álvarez a pair of fastballs past the outside edge, hoping to tiptoe past his fate: According to ESPN’s Stats & Information Group, no opposing left-handed batter had ever turned an off-the-dish Castillo heater into an opposite-field home run. But the second was too predictable, and it treaded too close, and Álvarez’s bat sprung and sent it soaring. A quick 371 feet later, the Astros held a lead they wouldn’t relinquish.

The question of which type of hitter thrives in the postseason — patient versus aggressive, contact-oriented versus homer-hunting — is tough to solve categorically, but Álvarez has lately made it pretty darn easy to solve in the specific. He entered the league in 2019 with a reputation for melding bat-to-ball skills with natural pop, and after a splendid half-season as a rookie and a slight decline following surgery on both knees, Álvarez has emerged in 2022 as Head Walloper in one of baseball’s bruisingest lineups.

In the regular season, the status manifested in top-10 numbers across all the big categories: a .306 batting average, .406 OBP, and .613 slugging percentage, with 37 homers in 135 games. In the playoffs, it’s shown in his ability to call on whichever of his talents he likes in whichever combination the moment requires: the eyes and patience to summon up favorable counts, the hands and bat-path to reach any coordinates over the plate, the muscle and hip torque to turn each instance of contact into a launching pad. When Álvarez came up again in the eighth inning of Game 2, Seattle manager Scott Servais intentionally walked him, opting to push a runner into scoring position instead of sacrificing another pitcher to destiny. “That was some Barry Bonds-type stuff there,” Houston skipper Dusty Baker said postgame. “That’s the ultimate respect.”1

Even by baseball’s nihilistic standards, this October has been a vacuum of sense-making. Of the four 100-win teams who entered the postseason with a combined 69 percent chance of winning the World Series, per FiveThirtyEight’s forecast, only the Astros remain. Their advancing comes down at least in part to dumb atomic-level luck, a smattering of hanging breaking balls left unpunished and line drives skittering foul. (You don’t win an 18-inning game 1-0 without surviving a few spots where you might have deserved to lose.)

But the failures of the Astros’ peers, and the deficiencies that in retrospect explain them, also emphasize Álvarez’s importance to Houston, and the usefulness of his skill set in the sport’s postseason crucible. Three of the Atlanta Braves’ All-Stars — Ronald Acuña, Jr., Austin Riley and Dansby Swanson — combined for 17 strikeouts in the division series, showing the shortcomings of a pure swing-for-the-fences approach. (Álvarez strikes out at a rate 3.5 percentage points lower than league average, which makes as much sense as an intergalactic rocket ship getting better fuel economy than a midsize sedan.) But merely avoiding strikeouts isn’t the answer, either. The Mets, who subsisted on bunching hits all year, faced a challenge in a postseason environment in which 44 percent of runs have been scored via the homer,2 and they managed just a trio of homers over their Wild Card loss to San Diego. (Álvarez is tops in all of baseball in hard-hit percentage, and over an even number of games he fell one RBI short of matching the Mets’ playoff total all by himself.)

Álvarez is the inheritor and endpoint of a philosophy that has helped Houston reach six straight AL championship series. The Astros’ scouting and developmental departments have long prioritized power but abhorred the strikeout; they built their dynasty on players who refuse the premise that one follows the other. In 2017 and ’18, on the strength of one of the deepest young lineups in recent memory, the club pulled off the rare trick of landing in the bottom two in baseball in punchouts and the top 10 in home runs. Now, with George Springer and Carlos Correa gone and José Altuve and Alex Bregman not quite what they once were, talent and temperament alike seem to have concentrated in the crown jewel of the franchise’s developmental system. “He has excellent power for a teenager, as well as a feel to hit,” Astros then-scouting director Kevin Goldstein said, understatedly but presciently, when the team acquired Álvarez from the Dodgers — who sure could have used him last week! — in 2016. On the day of Álvarez’s call-up to the majors in 2019, then-general manager Jeff Luhnow tweeted an image of a fully operational Death Star.

Anybody who says they know what’s coming in October baseball is selling something. In that 18-inning capper that finished off Seattle, Álvarez went 0-for-7. (Though even then, his polish glinted: He struck out only twice, and the dismal showing lowered his series OPS all the way down to … 1.086.) Maybe you hold the increasingly sensible belief that vibes are all that count, in which case Álvarez offers plenty of good ones. This postseason marks the first time his parents have been able to see him play major-league games in person, having attained a long-sought temporary visa from Cuba. After Álvarez cannonballed a Robbie Ray fastball to end the series opener, he turned and waved to his mother, weeping in the stands.

But if you cling to the notion that being better at baseball is a key part of winning baseball’s championship, Álvarez at least removes the added work of figuring out which of the sport’s manifold “betters” trumps the rest this time of year. When the best team left needs someone to get a run in from third, dig out of a tough count, fend off a sequence of sliders, work a walk or mash a pitch to Mars, they’ll hope the same guy is at the plate. Who else — in this postseason, or alive — could you say that about?

Why Another Xi Jinping Term Might Be in U.S.’s Interest