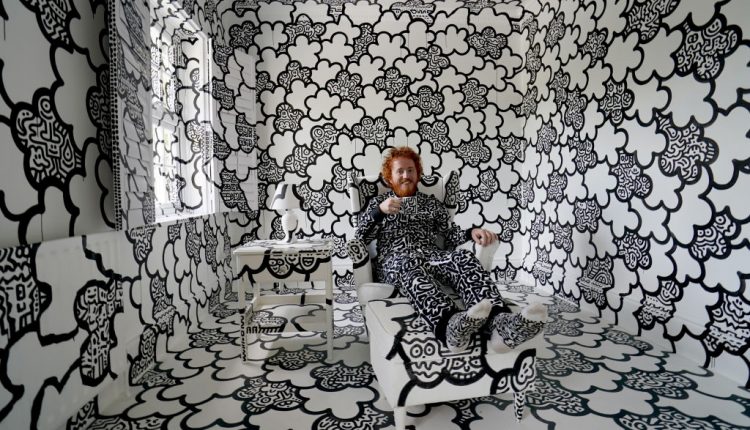 The U.K. artist known as Mr. Doodle, who has skyrocketed to viral internet fame and auction stardom over the past two years, has done it again. This time, with the completion of his largest project to date: a 12-room mansion, which he bought in 2020, and has covered entirely in his own black-and-white squiggles, embellishing even the toilet and the oven.

Mr. Doodle, whose real name is Sam Cox, announced that he had doodled his home in a now-viral Twitter post that included a 2-minute stop-motion video of the painting process. He also revealed in an interview with the Evening Standard, that the original owners of the house had initially pleaded with him to not cover it in his signature cartoon-like graffiti. “They told me whatever you do, please don’t doodle,” he said. “I didn’t listen.”

The makeover of the £1.35 million ($1.54 million) mansion, located in Tenterden, near Kent, in England, took the artist two years to complete. The ambitious endeavor used 900 liters of white paint, 401 cans of black spray paint for the exterior, 286 bottles of black paint for the inside walls, and 2,296 pen nibs, the artist told media.

I doodled my house pic.twitter.com/hHhNvqKPqa

The trajectory of Mr. Doodle’s career has become a case study in how to make it in the art world without a massive gallery or team of art advisors backing you. Instead of relying on blue-chip galleries or museums, the 28-year-old artist made the decision early on to rely on his social media following to gain popularity and clout.

His Instagram account now boasts 2.7 million followers, while his YouTube page has more than 95,000 subscribers. There, the artist regularly provides a steady stream of shareable content, easily consumed in short videos and viral images, which explain his method without the need for long, convoluted artspeak. British artist Sam Cox, aka Mr Doodle, with his wife Alena, reveals the Doodle House, a 12-room mansion at Tenterden, in Kent, which has been covered, inside and out, in the artist’s trademark hand-drawn doodles. Photo: Gareth Fuller/PA Images via Getty Images.

Mr Doodle’s method has proven incredibly successful, and even led to collaborations with major brands like MTV Europe (for which he designed an award), Puma, and Wembley Park shopping center. His style, which is reminiscent of fellow graffiti artist Keith Haring, is decidedly more playful than political, however.

And the artist’s attention to his craft has clearly payed off. His career has skyrocketed of late, particularly at auction. In March 2021, Artnet News examined Cox’s career trajectory, which by then had resulted in nearly $4.7 million in sales across three continents in a little more than nine months.

In December 2018, Sotheby’s Hong Kong offered 52 lots in an exhibition called “Mr. Doodle Invades,” which according to the art-market website the Value generated prices between $6,400 and $25,640 per piece. That coupled with several high profile shows, including one in 2018 at the Ara Art Center in Seoul, started to generate buzz for the prolific doodler. A view of the outside of the home of British artist Sam Cox, aka Mr Doodle. Photo: Gareth Fuller/PA Images via Getty Images.

“I’ve not set out with the goal of being represented by a major gallery or doing the exhibitions” at prestigious museums, Cox told Artnet News last year. “Instead, my goals have been to doodle over big spaces like tunnels, buildings, and eventually hopefully whole towns!”

The artist, for his part, says he now hopes to doodle the world, one house and surface at a time. Via Twitter, Cox announced: “So happy and excited to have finally doodled my house.”

“We now live in a fully doodled world.” Art Industry News: King Charles’s First Art Loan Is a Portrait of His Mother by Lucian Freud + Other Stories