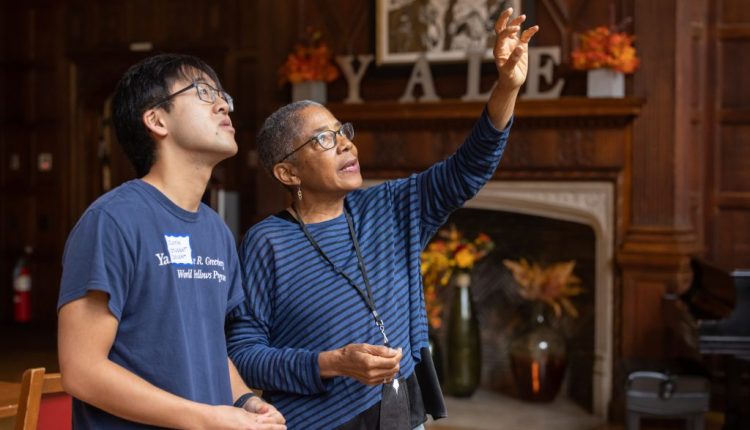 “It’s been great to see these works materialize after so many years of imagining what they could be and looking at designs and drawings and collages of them,” Anoka Faruqee, the associate dean of the Yale School of Art and chair of the committee to replace the windows, told Artnet News. “To see them amid the architecture has been really heartening. They both have quite a bit of visual power and boldness—they really pop in the space.”

The new stained-glass windows are part of a larger set of medallions installed in two rooms at one of Yale’s residential colleges, previously named Calhoun College. A native of South Carolina, the former U.S. vice president and senator graduated from Yale in 1804, and became the college’s namesake when the building opened in 1933.

It was a visiting alumnus who pointed out the enslaved field workers in one of the dining hall windows to Corey Menafee, an African American man and New Haven native who had worked in the college’s kitchen since 2007. Not long after, Menafee took a broomstick to the offending window pane, shattering the glass into 27 pieces. Yale kitchen worker Corey Menafee smashed this window depicting enslaved African Americans in the dining hall of a university residential college in 2016. The pieces of the window pane went on display in a Yale University Art Gallery exhibition on American glass in 2019, and are now housed at Yale University Library’s Manuscripts and Archives Department. Photo courtesy of Yale University, New Haven.

The police promptly arrested Menafee, and he resigned and appeared in court twice. But Yale soon dropped the felony charge and reinstated his job. The university also decided to replace a dozen of the college’s windows, all six from the common room and another six from a larger set in the dining hall.

There already had been protests to change the name of Calhoun College, but it was Menafee’s action that finally prompted Yale to act; the residential college was renamed Grace Hopper College in 2017. A Yale grad as well as a pioneering computer scientist, mathematician, teacher, and rear admiral in the U.S. Navy, Hopper is the second woman to have a residential college at the university named after her.

Yale set up the Hopper College Window Commission Committee to decide the windows’ fate. The goal, the group decided, was to create new artworks that would celebrate Hopper’s life, but also acknowledge the legacy of racism in the space. The new artwork needed to “confront and not erase the history of slavery in the United States, and Yale and Calhoun’s relationship to it,” Faruqee said.

The original windows are now housed in the Manuscripts and Archives Department at the Yale University Library, where they can be viewed by scholars. (The Yale University Art Gallery included the broken window pane in an exhibition about American glass in 2019.)

The controversial images actually played a role in the university’s decision to jettison the Calhoun name. This window of John C. Calhoun, titled Statesman by D’Ascenzo Studios (1932), was removed from Yale University’s Calhoun College common room over concerns about the former vice president’s support for slavery. The clouds in the corner once depicted an enslaved man at the politician’s feet. Photo courtesy of Yale University, New Haven, Manuscripts and Archives.

Because the artwork included idealized depictions of plantation life and the Antebellum South—the portrait of Calhoun originally depicted an enslaved Black man at his feet, replaced at some point in the ’80s by a clear pane of glass—Yale determined that the honor did not just recognize Calhoun’s legacy as a politician and leader, but did so in full awareness of his championing of slavery.

“There had been so many conversations over the years about the name of the college and what it meant that it was named after a white suprematist, so to create artworks that will hopefully deepen and continue those conversations is really exciting,” Faruqee added. Ringgold and Thomas were commissioned to create the new windows following a nomination process.

The committee picked Ringgold in 2019, and invited her to visit the campus to see the residential college in person before drafting a design.

Her vision for her very first stained-glass commission includes a portrait of Hopper teaching in the classroom, in front of a blackboard filled with computer code, as well as scenes of campus life. There are students studying in the library, playing on the basketball court, creating works in the art studio, and eating together. “I wanted the windows to show that the students are what is important, and what is joyful, that Yale is their home away from home while they earn their degree,” Ringgold told Artnet News in an email.

Thomas was one of two finalists for the dining hall portion of the commission, where the six new windows would be interspersed with remaining historic ones.

Before the committee selected her proposal, Thomas spent five days staying at the college, taking her meals in the dining hall to help inspire her designs. She also met with students on Zoom during lockdown, listening to their suggestions about the kind of imagery they wanted to see. “I took it as a huge responsibility,” Thomas told Artnet News, noting that she had heard about the controversy surrounding the broken window, but never dreamed that she would become part of the story. “I feel quite emotional about it. This was a moment for me to be part of something far bigger than me.”

One window shows a Black man breaking his chains and holding a book, which symbolizes the power of education. The Calhoun/Hopper transition is represented in a window titled Winds of Change, where two birds carry banners with the two names. A hummingbird approaches, carrying a banner reading “Hopper,” as a robin holding the “Calhoun” ribbon flies away.

“If you go back and look for the history, it’s there, and if you want see where the change happened, it’s there,” Thomas explained. Barbara Earl Thomas, Winds of Change. This preparatory collage has since been installed as a window at Yale University’s Grace Hopper College, representing the change of name from Calhoun College. Photo courtesy of the artist.

Another key moment in the university’s past is recognized in a window celebrating the admission of Yale’s first women undergraduate students in 1969. And then there is a tribute to workers like Menafee, in a panel of featuring individuals preparing food that reads “Kitchen to Table.”

“We really wanted to have something that honors and mentions the maintenance and kitchen staff,” Thomas said.

The history of the dining hall also gets a specific shout out, in a medallion that shows a jagged crack across the dining hall’s windows, with the words “Broken Is Mended.” Barbara Earl Thomas, Broken Is Mended. This preparatory collage has since been installed as a window at Yale University’s Grace Hopper College, to remind students that a kitchen worker was once moved to destroy a racist window of enslaved field workers. Photo courtesy of the artist.

It’s an acknowledgement, Thomas said, that “there is a wound that has been put back together—it’s not erased, but we can now move to whatever comes next.”

Amid the global push to remove monuments to problematic figures, especially those who profited from slavery, several stained-glass windows at institutions across the U.S. have come under fire.

Kerry James Marshall has been tapped to replace a set of stained glass windows featuring Confederate imagery removed by the Washington National Cathedral in 2017. The originals—which were recently seen at National Museum of African American History and Culture in D.C.—included saintlike portraits of generals Robert E. Lee and Stonewall Jackson; the new ones will be the artist’s first works in stained glass. Last September, the Cathedral of the Rockies in Boise, Idaho, removed a stained-glass window depicting Robert E. Lee and donated it to the Idaho Black History Museum. A new window, designed by Minnesota’s Willet Hauser Architectural Glass, depicts Leontine T.C. Kelly. In 1984 she was made a bishop at the Boise church that now houses her visage, making her the first African American woman to become a bishop in any Christian denomination.

Yale’s completed windows were unveiled in September, adding the work of two leading contemporary artists to the university’s already-considerable stained-glass holdings—the campus is home to windows by such giants as Louis Comfort Tiffany and John La Farge.

Two additional filigree portraits by Thomas, made from laser-cut steel and glass, are set to be installed in two stone niches in the Hopper College dining hall later this month. One depicts Hopper, and the other Roosevelt L. Thompson, an African American student who was a resident of the college and died in a car accident his senior year. The college’s dining hall was named in his memory in 2016. Thomas will also have exhibitions at the New Haven Public Library and Harlem’s Claire Oliver Gallery, both coinciding with the final unveiling of her Yale commission. Ringgold, meanwhile, currently has a 50-year career survey that originated at New York’s New Museum is currently on view at the de Young Museum in San Francisco.

“These works will affect people’s experiences in the college in ways that they’re probably not even conscious of,” Faruqee said. “Art has a way of entering your psyche and consciously and unconsciously acting upon us, especially when art exists in spaces that we use daily, not just places where we expect to see art.”

The French Collective Obvious Has Become One of the First A.I. Artists to Receive Gallery Representation