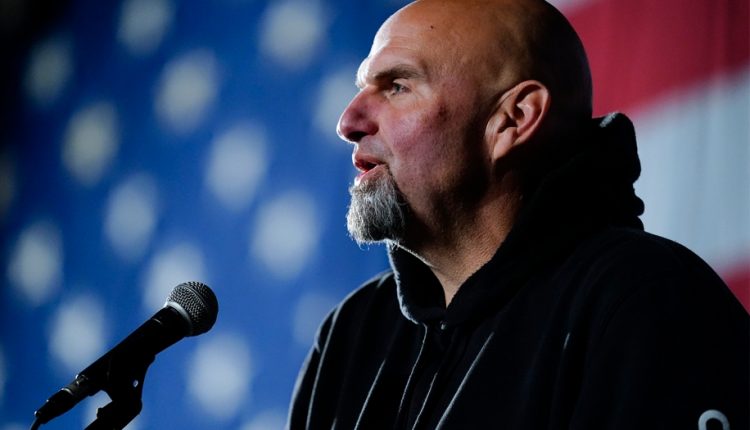 In the months since John Fetterman had a stroke, the Democratic candidate for Pennsylvania’s U.S. Senate seat has returned to the campaign trail and started doing interviews — while his opponent’s attacks on his health have grown more and more intense.

As Mehmet Oz, the Republican nominee, continues to flounder in polls and fundraising, he’s taunted Fetterman about initially declining to debate and questioned whether his rival is using his stroke as an excuse to avoid a public faceoff. Now, Fetterman’s health is in the news again after the candidate — who’s currently serving as the state’s lieutenant governor — used closed-captioning technology during a recent interview with NBC News.

Fetterman said that as part of his recovery he needed the technology, which transcribed the reporters’ questions and displayed them on a screen for him to read, because of a temporary difficulty with auditory processing; in the aftermath of the stroke, Fetterman still doesn’t understand everything that’s said to him. With the captioning, however, he was able to respond to the reporter’s questions (with the occasional verbal slip-up). During the interview, Fetterman said that the stroke has changed his life — but that it wouldn’t affect his ability to serve as an elected official. Still, the interview prompted a new spate of questions and digs from Republicans about whether his recovery makes him unfit for a seat in Congress.

To be sure, we don’t have enough evidence to say for certain whether candidates with disabilities have a lower chance of winning elections. We do know, however, that people with disabilities are dramatically underrepresented in government. That’s especially true at the federal level where just over 6 percent of elected officials reported having a disability compared with 12 percent at the local level, according to a study from Schur and her co-director Douglas Kruse.

Despite his health challenges over the past few months, Fetterman’s odds against Oz still look good. Fetterman’s lead in the race is narrowing, according to recent polls, but FiveThirtyEight’s 2022 midterm election forecast still gives the Democrat a more than 7-in-10 chance of beating his Republican opponent. And that’s probably why Oz has ramped up attacks on Fetterman’s health, Kruse suggested. “Oz is … behind right now and wants to bring up this issue of competence,” he said.

Indeed, with Fetterman still leading in most polls, it only helps Republicans to amplify ableist stereotypes about chronic illness and the use of accessibility aids to argue that Fetterman is unfit for office. The media’s coverage of Fetterman’s condition is arguably bolstering them, too: The NBC interview focused mostly on his health and the reporter who conducted the interview made an offhand comment that Fetterman appeared to struggle to understand small talk beforehand, which drew criticism from other reporters who had spoken with the candidate and said he did not exhibit issues with comprehension.

As a result, it’s been easy to keep people focused on Fetterman’s health: His ability to speak and understand, rather than his policy positions, were the subject of many stories and tweets posted in reaction to the interview.

According to Richard Scotch, a professor of sociology and public policy at the University of Texas at Dallas who researches disability rights and social inequality, some of the stigma surrounding physical disabilities has decreased over time. “They’re not viewed as negatively as they were 60 or even 30 years ago,” he said. That, in part, could be one reason why a spate of public officials with physical disabilities across the political spectrum — including Republicans Gov. Greg Abbott of Texas and Rep. Madison Cawthorn of North Carolina, and Democratic Sen. Tammy Duckworth of Illinois — have run successful campaigns. “There aren’t many critics who would say that their disability hampers their ability to hold public office,” Scotch said. Still, he added, the same isn’t true for all disabilities: “Impairments that affect one’s ability to communicate effectively may be more stigmatizing than those that do not.”

Having a disability like Fetterman’s, which he and his doctors believe will improve over time, could fall into that category. That’s because having an “invisible” disability versus a “visible” one — having trouble understanding speech, as opposed to using a wheelchair — could get linked in voters’ minds to issues like mental capacity or a cognitive decline, “which are scarier for people to digest,” Schur said.

Fetterman is not the only politician of late who has had to field questions about his mental abilities. While not physically disabled, older politicians like President Biden or Sen. Dianne Feinstein (the oldest sitting U.S. Senator who is reportedly experiencing a decline in her cognitive health) have been repeatedly told that they should step down from or not seek additional terms in public office.

But disability discrimination is not always covered equally: Several former presidents, for instance, have been in apparent cognitive decline while in office without much question. What might make Fetterman’s case different, however, is that he’s both publicly discussing his condition (unlike other politicians who have hid theirs) and is in an ongoing and competitive race. “There’s this image in America, especially, that the goal is to be completely independent and self-sufficient: All those values that supposedly go along with this kind of ‘capability,’” Schur told me. “Whenever you see somebody dependent on technology, or accommodations, I think some people, especially those with more traditional values, might question whether that person is fit for a particular job.”

Oz’s attacks have drawn on these stereotypes: Last month, the Republican released his medical records and has been repeatedly challenging Fetterman to do the same, despite the fact that doing so is a fading tradition — and typically employed in presidential races, not Senate races. “If John Fetterman had ever eaten a vegetable in his life, then maybe he wouldn’t have had a major stroke and wouldn’t be in the position of having to lie about it constantly,” a senior communications adviser to Oz’s campaign said earlier this year.

On the other hand, Fetterman’s health journey could resonate with some people. According to estimates from Kruse and Schur, 69 million people in the 2020 electorate either had a disability themselves or lived with someone with a disability. “So almost one-third of people have very direct experience with disability,” Kruse said. “And when a politician says they have a disability, I think a lot of people with disabilities and those who are close to them will say, you know, that’s me. That’s part of my identity.”

In his interview this week, Fetterman said that his experience gave him an even greater ability to understand the challenges that voters face. “In some ways, having an impairment has some positive valence for candidates because recovering from a serious illness demonstrates grit and resilience,” Scotch said.

At this point, we don’t know enough to say for certain whether Fetterman’s interview and the ongoing recovery from his stroke will change the way he’s perceived. It’s very possible that it won’t, Kruse predicted, since the Democrat utilized widely available closed-captioning technology he said most voters could see as “reasonable.” And despite the fact that our metrics show a tightening race in Pennsylvania, that could be due to a number of factors, including both campaigns ratcheting up attack ads on a host of issues as Election Day approaches or Republican voters coalescing behind Oz.

Overall, though, voters still overwhelmingly have a positive view of Fetterman, according to recent polls. A September Marist Poll of registered voters in Pennsylvania, for instance, found that a plurality of adults in the state (45 percent) said they had a favorable view of Fetterman compared with 39 percent who had an unfavorable view. Oz, meanwhile, was underwater: Just 30 percent of respondents said they had a favorable view of the former TV personality versus 51 percent who viewed him unfavorably.

That said, we would expect that this issue will come up again — especially as the race could well determine which party controls the Senate. Fetterman and Oz are slated to debate on Oct. 25, so there’s time for Oz’s attacks to sink in — but also time for Fetterman to respond.

Can Democrats Win 52 Senate Seats And Kill The Filibuster?

Spotlight: An Exhibition of Yayoi Kusama’s Most Iconic Motifs Alights at PAD London