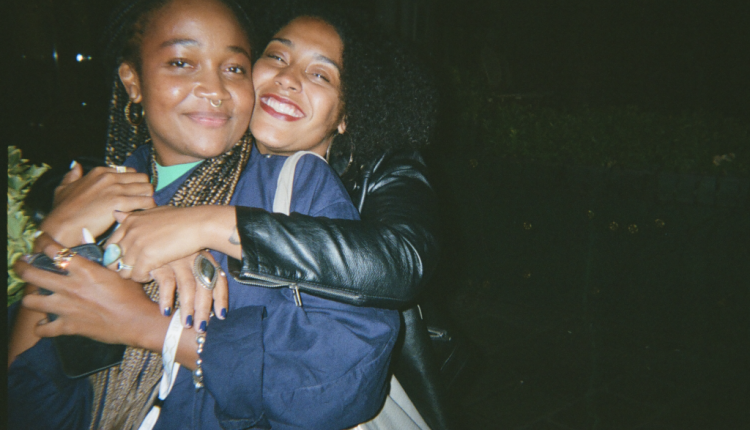 I caught wind that Kimberly Drew, associate director at Pace and well-known person-about-town, would be attending the event, so I handed her a disposable to see what the week looked like.

Take it away, Kimberly! A sculpture by Simone Leigh at the 2022 Venice Biennale.

As part of the celebration of Simone Leigh’s selection as the first Black woman to represent the United States with a pavilion in Venice, she—along with Rashida Bumbray, Tina Campt, Saidiya Hartman, and an endless roster of support from Leigh’s studio, students at Spelman college, and staff of the Cini Foundation—invited nearly 1,000 guests to take part in a three-day celebration of Black womanhood and scholarship. I couldn’t imagine missing this gathering for the world, and yet, I had no idea how life-changing this “Loophole of Retreat” would would be. Me and my dear J. after day one of the “Loophole of Retreat.”

In the week before heading to Venice, [Jenna Wortham] texted me: “see you there?” and I was thrilled. As some may know, J. and I co-edited Black Futures, our anthology about Black culture, but really about Black archival practices and community-building. Downloading with J. after our respective travels is one of my favorite things to do and being able to download each day over pasta and tiramisu felt extra special. Here is a candid moment of Lauren Haynes (who was recently named director of curatorial affairs at the Queens Museum); Sandra Jackson-Dumont (director of the George Lucas Museum in Los Angeles); Lizania Cruz (artist); Thelma Golden (director and chief curator of the Studio Museum in Harlem); and Koyo Kouoh (chief curator and executive director of Zeitz MOCAA in Cape Town).

The “Loophole of Retreat” was an incredible convergence of artists, curators, and thinkers from across the globe. The retreat was jam-packed with speakers, performances, but one of my favorite things about this convening were the interstitials: watching people hug, laugh, and connect. If you weren’t able to attend, the livestream from the convening is available on YouTube here. Here is where I have to make a small confession: I knew I’d be doing this Wet Paint before I boarded my flight to Europe. I knew I needed to get a disposable, but life was very chaotic before my travels kicked off. However, on my first morning in Venice, I luckily stopped at a photoshop to buy Suhaly Bautista-Carolina, pictured here, a disposable because she had mentioned forgetting to buy one before leaving home. Suhaly had had a bumpy road to Venice and I wanted to get her something to make her smile. When I wrote to her asking for permission to publish these photos, she replied: “of course you’d forget your own but remember to get one for me.” Sometimes, maybe all the time: showing love is the most urgent thing we can do. Suhaly, thank you for taking these photos and getting them developed! Speaking of love: watching Jessica Lynne and Oluremi C. Onabanjo’s presentation left me deep in my feelings. Lynne and Onabajo have been collaborating for years and getting the smallest insight into some of the work and care they’ve been harnessing really spoke to the ethos of the gathering. They invoked ancestors, spoke about their respective homes, and grounded us in the ever-present truth that the personal is always political.

At what would be the close of their presentation, rather than closing, Onabanjo involved a powerful message: “We resist here the sense of start and finish often intimated by constructed narratives. Mimicking the manner of the photographic we remain open and moving.” This gathering and the ideas put forth are so much more open and in motion than any trite summation or conclusion could offer. I’m hugging Jessica and telling her just how proud I am of her.

There is something in knowing that your friends are limitless and it’s something even more special when you watch them stepping into their power. Another highlight of the convening was the performance program that was held in the former Piscina Gandini at the Cini Foundation. In the space that was the pool, the Loophole team built a gorgeous arena theater for performance. Captured here, Ayana Evan’s collaborative performance invited the audience to run, play, and reflect. The deeply sincere piece was a welcome moment for movement against the backdrop of the retreat. Before we all laid down, we stomped our feet in unison, the reverberation of our stomps is a feeling I’ll be chasing for a long time. A group photo of my Black Art Incubator crew. From left: Jess Bell Brown of the Baltimore Museum of Art who co-curated “A Movement in Every Direction” with Ryan Dennis; Taylor Renee Aldrige, who is currently at the California African American Museum and just opened an exhibition of paintings by fellow Detroit native Mario Moore; and Jessica Lynne, who is hard at work on her first book.

The Black Art Incubator was a group that formed in 2016 to host more than 30 free workshops as part of Recess’s “Assembly” program. What started at a residency, has continued as a sisterhood. I’m so proud of each of these women. From beginning to end, the “Loophole of Retreat” was informative, inspiring, heart-warming, life-affirming, and soul-quenching. As Black women in the field, we are often erased, under-valued, and over-worked. What the Loophole team offered was a space not only for us to be together, but to be at the very center of attention for three consistent days. May there be many, many more loopholes. May the loneliness we all-too-often experience truly be abolished.