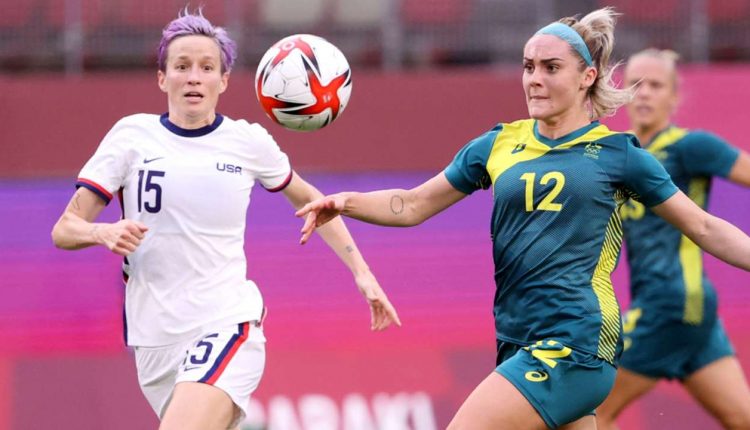 By the end of the match, it was almost as if both sides were content with the scoreless draw. The U.S. women’s national team and Australia tied 0-0, clinching second place in Group G for the USA, while Australia finish third and will be hopeful of advancing pending results in the other matches. A Sweden victory in the other Group G match clinched first place for the European side.

The USWNT will advance to face the Netherlands or Brazil in a Friday quarterfinal, depending on their Group F results later this morning. A matchup against the Netherlands would be a rematch of the 2019 World Cup final. Should Australia go through as one of the two best third-place teams in the tournament, it would face Great Britain or Canada in a quarterfinal.

While the seond half was a dull affair, both teams came close to scoring in the first half. Australia struck the crossbar, while the USA’s Alex Morgan scored on a header that was scratched for a tight offside flag. Then in the second half neither team did much in attack and the two sides settled for a 0-0 draw that will satisfy both nations as they turn their focus to the knockouts.

Final: No need for a breakdown of that second half. There was a moment when it seemed like the USA’s subs would actually help get the first goal of the match, but then both teams backed off and settled for the draw. With Sweden beating New Zealand and clinching first place, the 0-0 draw was convenient for both sides. Australia, which finished in third place, will hope that its four points will be enough to get it to a quarterfinal against Canada or Great Britain. It will have to wait for the final results from the other groups later today which will determine the two best third-place teams to advance.

Later on we can dissect how many were forward, backwards and what not. But emmm…yikes.

91st min.: The Australian goalkeeper comes off her line to intercept a through ball to Carli Lloyd, who’s still chasing hard.

88th min.: SUB – Kristie Mewis is on for Rose Lavelle for the final minutes. It’s a question of seeing out the 0-0 result. Neither team is really pressing all that hard for a winner.

84th min.: SUB – Emily Gielnik comes in for Australia’s Kyah Simon, who was one of the better players on the field.

78th min.: A combination of the subs and a tiring Australian side, the balance of the match seems to have tipped in the USA’s favor and the Americans are seeing more of the ball than they have all game to this point.

74th min.: SUBS – It’s Christen Press and Alex Morgan coming off. It’s Carli Lloyd, Lynn Williams and Tobin Heath — all fresh legs — who will look to help the USWNT get a breakthrough goal. Heath is on the left, Williams on the right.

73rd min.: The USWNT is preparing to bring on Carli Lloyd and Lynn Williams. Those would be two attack-minded substitutions.

71st min.: Horan with another shot in the box on a corner kick. She’s been active since coming on. Rose Lavelle picks up a yellow card trying to keep the ball in the Australian half.

65th min.: SUBS – Sam Mewis and Megan Rapinoe come off the field for Lindsey Horan and Tobin Heath. And Rapinoe comes off right after committing a foul on Australia’s Carpenter that arguably should’ve resulted in a second yellow card.

63rd min.: Why not? Rose Lavelle fires from distance, but it’s an easy stop for Australian goalkeeper Teagan Micah

62nd min.: SUB – First one comes from Australia with Kyra Cooney-Cross coming in for Chloe Logarzo in midfield.

58th min.: It looked like a great chance for the USA for a moment on a set piece, but there were six U.S. players offside. The assistant kept the flag down to wait for the play to occur. The officials maybe should’ve done that on the Alex Morgan header goal and let the VAR review. Inconsistent officiating from the ref assistants.

55th min.: Christen Press gets in behind and just lifts the ball at the goalkeeper. It seems like if the USWNT is going to do anything in attack it’s going to have to be a solo effort. Rapinoe and Press have switched sides to try to get something going.

54th min.: Goodness. You know you’re having a bad day when Alyssa Naeher’s pass to Crystal Dunn goes out of play.

50th min.: Alex Morgan disappointed by another offside call. Camera pans to Kelley O’Hara who looks frustrated. But Crystal Dunn just gave it away with another searching ball that is nowhere near Megan Rapinoe.

46th min.: Second half is underway. No changes.

Halftime: Australia was the better team in that half, but the Matildas couldn’t find a breakthrough goal despite multiple set pieces and a header that hit the crossbar. The USA had two real chances and both came through Alex Morgan, with one finding the back of the net but was overturned for a tight offside. The main issue for the USWNT is that the midfield and forwards can’t help keep any real possession and they’re outnumbered or succumb to Aussie pressure. Australia made more passes, they were more accurate with their passes and they won more tackles (below). We’ll see what tactical changes U.S. head coach Vlatko Andonovski makes at the half.

Midfielders/attackers passes from the USWNT

45th min.: The USWNT goes the other way and there’s a great through ball to Christen Press, but her first touch takes her wide left and her shot on goal is weak and makes for an easy save.

44th min.: The USA’s Becky Sauebrunn needs to concede a corner after a ball over the top was flicked into the path of Kyah Simon. Julie Ertz with a good defensive play in the box to stop Sam Kerr.

43rd min.: Australia’s Yallop with a shot on the right side of the box that is caught comfortably by Naeher. That was preceded by a turnover from Kelley O’Hara on the other side of the field. Australia has dominated this half.

38th min.: On the ensuing counter from the set piece, Megan Rapinoe chases a ball at the edge of the Aussie box, pushing Carpenter to get to it and then running into the ‘keeper. Yellow card for Rapinoe.

38th min.: A Sam Mewis foul leads to another set piece and two Australia players get in each other’s way and don’t get a shot off.

36th min.: The USWNT is not sustaining any real possession. Either the Australian pressure leads to a giveaway or the passing is off. Crystal Dunn tried to send Sam Mewis in behind the defense, but that pass was too long.

34th min.: Australia can’t take advantage of a corner and the USWNT can’t spring the counter. It’s been the theme of the first half here.

33rd min.: In the meantime Madelen Janogy adds a second for Sweden. The Swedes are cruising against New Zealand, up 2-0.

31st min.: The USWNT scores! Alex Morgan heads home a cross from Kelley O’Hara after a short corner, but the flag goes up for offside. Officials are taking a long look, but no clear and obvious error found and the offside call holds up. But it was REAL close.

30th min.: Christen Press with the ball at her feet running at the Aussie defense, but defender Ellie Carpenter picks the ball off. It looked dangerous.

26th min.: Australia wins another ball in the U.S. half with the high press. The ball again in the USA box, but it’s momentarily cleared. The American women can’t get a hold of this game just yet.

20th min.: Another Australia set piece. This one’s a corner and the Matildas get a shot off in the box that is blocked. Outside of the Alex Morgan shot, it’s been all Australia early on.

17th min.: An Australia header hits the crossbar! Naeher looked like she had a beat on that ball, but it was dangerous. It was the late addition, Mary Fowler, with the shot.

15th min.: To confirm that the USA and Australia are playing for second place, Anna Anvegard has put Sweden up 1-0 on New Zealand and they look set to win Group G. Both group finales are being played simultaneously for competitive reasons.

14th min.: And it’s a third Australia set piece in the U.S. defensive third. This one is headed at U.S. goalkeeper Alyssa Naeher.

12th min.: Another set piece for Australia into the U.S. box. Nothing comes of it. The broadcast flashed a graphic and Australia has 62% of the possession so far.

8th min.: USA chance – Alex Morgan shrugs off defenders on the break and her shot is right at the goalkeeper. Looks like she’s going to get a chance at those quick breakaways today. A pass from Lavelle set her on her way.

6th min.: Teams exchanging bouts of possession early on. No one team really holding onto it for long enough stretches. Game hasn’t settled down just yet.

1st min.: We’re off and the USWNT is already in Australia’s half.

3:56 a.m.: Late lineup change by Australia at forward. This is good news for the USA. Foord was a menace in the first two matches:

3:50 a.m.: There will be some atmosphere at this game. We’ll see who the kids root for:

A CROWD!! 1,000 local school kids in as we are in the Ibaraki Prefecture. #USWNT v @matildas from Kashima with Julie Foudy at 4am ET on USA!

3:48 a.m.: There’s a lot of reaction to Abby Dahlkemper being out and Tierna Davidson taking her place. Although Dahlkemper has made errors in the first two games, this sub is not about performance, it’s about getting her rest like every other regular starter:

I’ll just say this now because I know people will say it after the game. Tierra Davidson is the best center back on this team #USWNT

11:40 p.m.: You probably had to do this a few days ago. Don’t think the boss will appreciate the late notice:

We’re the #USWNT and we approve this message 🇺🇸 https://t.co/15Kn0n6K2C

U.S. women’s national team head coach Vlatko Andonovski promised there would be more lineup changes to provide his players with sufficient rest ahead of the single-elimination knockout rounds. Center back Abby Dahlkemper, who played the full 90 in both matches so far, sits out, and backup forward Lynn Williams makes the 18-player roster.

As for Australia, the Matildas can’t relax too much in this game. A heavy loss could cost them a spot in the quarterfinals if other results don’t go their way. The starting XI has just two changes with wide midfielder Hayley Raso sitting out and center back Alvi Luik on the bench.

How to watch USWNT vs. Australia Olympic soccer

USA vs. Australia will air live on USA Network and Telemundo at 4 a.m. ET. Those channels can be streamed on fuboTV (free 7-day trial) .

All soccer matches are also streamed in the USA on NBCOlympics.com, TelemundoDeportes.com, NBC Sports app and the Telemundo Deportes app — all with user authentication.

Time For The End Of The Teen Gymnast