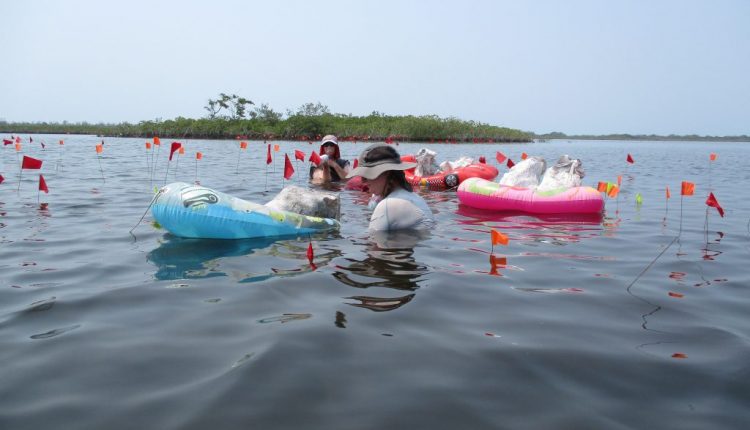 The recent discovery of ancient salt kitchens, found underwater in a Belize national park, is giving archaeologists new insight about the role of salt in the Mayan economy.

All four structures hail from Ta’ab Nuk Na, the largest salt complex at Paynes Creek. Assuming all 10 known salt kitchens across Paynes Creek were active at the same time, they could’ve provided enough salt for 24,000 people, who used it to preserve and flavor food.

“The workers lived on site, which shows it was a ‘cottage industry,’ featuring families producing more than their needs [and supplying salt for] the nearby inland Maya,” McKillop told Artnews.

Anaerobic peat trapped in mangrove roots miraculously allowed the buildings’ foundational posts to survive since they were built in 650 to 800 C.E.

“Pole-and-thatch structures are common in traditional Maya villages,” the report reads, “although the tropical environment (and lack of building foundations) means that they are typically archaeologically invisible.”

McKillop has conducted field work on Belize’s south coast since 1982, but began studying Paynes Creek in 2004, the same year she discovered the only known Mayan canoe paddle. As part of the latest discovery, the team also unearthed several types of ceramics, jars for storing brine, grinding stones for preparing maize, and a broken ocarina (a wind instrument) in the shape of a person. Artifacts embedded on the seafloor of Ek Way Nal, the second-largest salt workshop at Paynes Creek.

Everyday flotation devices helped them explore and document the site without harming artifacts embedded in seafloor silt. Nearby, they also discovered briquetage pottery, confirming that these buildings served salt-making, but also that the Mayans made their salt by boiling water over fire.

“It’s very rainy in southern Belize so solar evaporation, like off the north coast of the Yucatan, doesn’t work,” McKillop wrote in an email to Artnet News.

Researchers couldn’t determine a date from the briquetage. Instead, they compared red Belize pottery discovered during the search with radiocarbon dating on the wooden posts to confirm the buildings at Ta’ab Nuk Na were constructed across three phases, mostly during the Late Classic period, when surplus salt production started in order to serve a burgeoning population. Sills and team member in the field.

The presence of a residential building provides evidence that salt production was kin-based—Mayan families made what they needed and traded the rest without meddling from monarchs.

Next April, the team will return with LSU students to explore the area around Ta’ab Nuk Na. “One of the sites has a pottery paddle we mapped during survey, so it may have been a specialized pottery production location where the Ta’ab Nuk Na Maya got their salt making pottery,” McKillop told Artnet. A jadeite gouge with rosewood handle found at nearby Ek Way Nal raised questions.

They’re also hosting the 4th international congress on the anthropology of salt, which opens at LSU tomorrow.