Tom Brady Used To Put The Team On His Back. Now He Needs Help — And Isn’t Getting It. 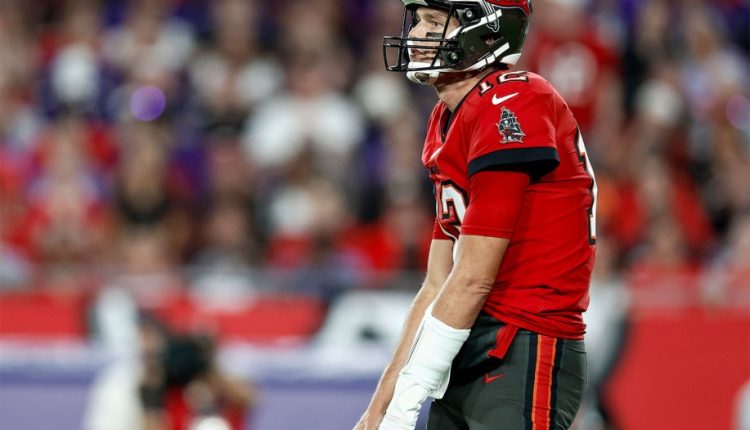 A little over five years ago, I wrote that Tom Brady will eventually be bad. And after 25,205 additional yards, 177 touchdowns, three Pro Bowl berths, a first-team All-Pro nod, three Super Bowl appearances and two Super Bowl wins (with two different teams), that time might have finally arrived for the 45-year-old Tampa Bay Buccaneers quarterback.

Brady currently ranks 17th in Total QBR (49.1), 18th in average yards per dropback (6.15), 23rd in lowest off-target throw rate (17.2 percent) and 25th in completion percentage above expected (minus-2.0 percentage points), according to ESPN’s Stats & Information Group. Many of Brady’s rate stats are both below the league average and rank among the bottom half of qualified starters. In a world where there are college graduates who’ve never known Brady as anything but one of the game’s best passers, this has been jarring to watch — even if we knew it was coming someday.

So what’s to blame for Brady and the Bucs’ struggles? It’s tempting to point the finger squarely at the aging superstar in the center of the storm. But while Brady long ago proved his historic success wasn’t just a product of Patriots head coach Bill Belichick’s system, he can’t win all by himself, either (no matter how much he yells at his offensive line). Brady’s play clearly isn’t up to a Super Bowl standard this season, but he isn’t the only Buccaneer falling short – many aren’t within shouting distance.

Let’s start with perhaps the team’s biggest weakness: the run game. This rushing attack isn’t just bad, it might be the worst of the NFL’s 32-team era. Tampa Bay’s ball carriers are averaging just 3.04 yards per attempt through eight games; that’s on pace to be dead last out of the 672 team-seasons since 2002. But it’s not as if they have a lot of room to work with: The Bucs have also averaged just 1.67 yards before initial contact, which is tracking for the worst mark since 2006.1. Many expected the Bucs’ offensive line to struggle after losing Pro Bowl center Ryan Jensen during training camp (among other injuries), and that yards-before-contact number makes it clear that things aren’t exactly going well on the blocking front – though Tampa Bay’s run-block win rate ranks a more respectable 19th overall.

If the run-blocking is mediocre but the run game is historically bad, then some blame must rest on the runners. And it does: Leonard Fournette and company are averaging just 1.36 yards after first contact, which ranks 417th out of the 448 team-seasons for which we have data (since 2009).

Although Fournette has a reputation as a power back, his style is strangely indirect. His speed at the line has been a pokey 8.71 miles per hour this year, an average which ranks 45th of 46 qualifying runners. But that’s only the third-slowest season of his six-year career. Furthermore, he’s had to travel an average of 4.4 yards on the ground per yard gained this season.2 That’s on track to be his second-least efficient season, though again is not wildly out of step with how he’s run in the past. And his fastest recorded speed at the line so far this year is his second-best (18.55 miles per hour), so the 27-year-old Fournette hasn’t physically lost a step. What he’s lost is elusiveness: Once a defender gets within a yard, Fournette is averaging the ninth-fewest yards per carry (2.96) of any back since NFL Next Gen Stats began tracking this data in 20163.

As a result, the Bucs have dropped from eighth in EPA per designed rush over Brady’s first two seasons (0.043) to dead last this year (-0.178). If Fournette doesn’t get his groove back, Tampa Bay’s EPA per rush is on pace to be worse than all but four of the 544 recorded squads since 2006.4

The real surprise is that they’re actually stopping him.

Despite the one-dimensional play-calling — and the resulting extra defensive backs faced — Mike Evans, Chris Godwin and the rest of the Bucs’ talented receiving corps have still managed to rank 17th in average separation when the ball arrives, per NFL Next Gen Stats. That has led to an open-throw rate for Brady of 19.1 percent (ranked 22nd), and wide-open throw rate of 23.2 percent (tied for 11th). Sure, the pieced-together offensive line hasn’t been great in pass protection, with a 53.5 percent pass-block win rate that ranks 26th in the league. But Brady has gotten the ball out much faster than any other QB this year,5 leading to a 19.0 percent pressure rate (second-lowest among qualified QBs). With many reasonably open targets and relatively few pressured throws, the Buccaneers’ expected completion rate is a whopping 67.9 percent – higher than that of all but three other teams.

But Brady is only completing 65.9 percent of those throws, giving him the 11th-worst differential between actual and expected completion rate in the league. Over his first two years in Tampa, Brady’s receivers got a little less open (19th in average separation) than they have so far this year, so his expected completion rate was a little lower (66.6 percent). But the Brady of 2020 and 2021 completed more of his throws anyway (66.7 percent, for a plus-0.1 percentage-point differential) – and he sent them much further down the field, too, averaging 8.16 air yards per attempt versus 7.45 this year.

In other words, Brady used to do far more with less than what the Bucs are giving him to work with this season.

The quickest fix for the Tampa Bay offense might be for Fournette to run the way he did last year: nearly a full mile-per-hour faster at the line of scrimmage, and gaining over a yard more per carry after encountering the first close defender. But Fournette’s more-tentative running is probably tied up in the play of the blockers in front of him–just like Brady’s more-rushed, less-accurate, shorter passes. And that problem isn’t going away anytime soon. Jensen seems unlikely to return to the Bucs in time to make a difference, and the same goes for re-re-retired tight end Rob Gronkowski.

But there is one place where the Bucs’ offensive coordinator, long-rumored head-coaching candidate Byron Leftwich, can help Brady out.

It’s long been assumed that teams have to run the ball well in order for play-action passes to be effective. That’s probably the theory Leftwich is working under, since his team has attempted a league-high 340 passes but thrown the fourth-fewest off of play-action (42). But Leftwich should stop feeling sheepish about calling those plays, even if the Bucs’ run game is so horrid. Brady’s raw QBR on play-action passes is 85.6 – fourth-best in the league, as opposed to a 17th-ranked 48.3 otherwise. His average yards per dropback on play action? 8.48, eighth-best in the league. And the team’s EPA per dropback jumps from .046 with no play-action to .403 with it  – better than every team but the Buffalo Bills.

Simply calling more play-action passes won’t be a magic bullet; the law of diminishing returns always applies. But the Buccaneers have already gotten nearly as one-dimensional as an NFL offense can be, and their returns have already been greatly diminished. Even if they’re doomed to finish the year as the worst-running team any NFL fan can remember seeing, just pretending to have run/pass balance might be far more effective than admitting to defenses that they don’t.

Mega-Gallery Hauser & Wirth Is Getting Into the Auction Business—Temporarily, and for a Good Cause