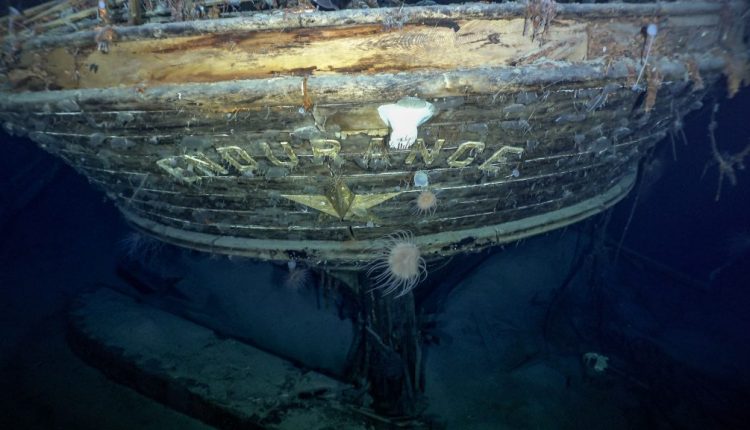 Earlier this year, marine archaeologists made the thrilling identification of the remains of Ernest Shackleton’s lost ship the Endurance, which famously sunk in 1915 after getting trapped in the Antarctic ice of the Weddell Sea.

But now, the ship’s remains may be in jeopardy, reports the Guardian. If the Endurance is not raised from the Antarctic seabed, it will “decay out of existence,” Mensun Bound, director of the Endurance22 search expedition that found the shipwreck, said at a recent event in London.

Thus far, the freezing waters of the Antarctic, which are thankfully free of wood-eating organisms, have helped preserve the ship. But as time goes on, the wreckage will continue to deteriorate if it remains on the ocean floor.

“If we leave it there, it’s organic, it’s going to decay some time beyond our lifetime,” Bound warned. However, bringing the Endurance to the surface will be an extremely challenging task. The Endurance leaning to one side during the Imperial Trans-Antarctic Expedition led by Ernest Shackleton. Photo by Frank Hurley/Scott Polar Research Institute, University of Cambridge/Getty Images.

“There are a lot of contrasting views about [raising the ship]. We have a range of ideas on that one, and we have to remember the Shackleton family, who very likely own the ship, they have fairly strong views of their own,” Bound said. “Bringing it up—we’ve got to think about conserving it and the process of that, which museum is going to take that, which could take forever and a day.”

The shipwreck currently lies nearly 10,000 feet beneath the ocean waves, just four miles south of its last recorded position. Shackleton’s granddaughter Alexandra Shackleton has expressed her preference that the Endurance remain there. Soccer on the floe whilst waiting for the ice to break up around the Endurance, 1915, during Ernest Shackleton’s Imperial Trans-Antarctic Expedition. Photo by Frank Hurley/Scott Polar Research Institute, University of Cambridge/Getty Images.

Miraculously, the vessel’s 28-person crew survived the ill-fated British Imperial Trans-Antarctic Expedition, which was intended to complete the first land crossing of the continent.

And even if the Endurance never lives to see sunlight again, the Endurance22 team intends to return to the site of the wreck to more fully investigate its watery remains.

“She’s the ultimate sealed box mystery, it’s an Aladdin’s cave. It’s like the film Citizen Kane with all the antiques, everything is there,” Bound said. “[We’re] anxious in time to conduct a proper marine biological survey because she is this incredible oasis in a vast plain.”

Botticelli’s Exquisite Madonna, a Treasure of the Paul Allen Collection, Could Sell for $40 Million at Christie’s

Comic Book Dealers Are Making Six-Figure Sales at New York’s Comic Con, Thanks to the Boom in Film and TV Adaptations