The Public Can Now Access the Statue of Liberty’s Crown, After Two and a Half Years (and 14 Flights of Stairs) 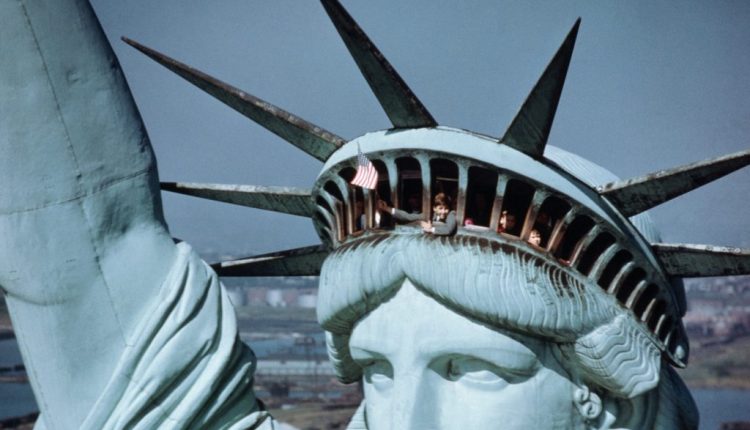 For the first time in more than two-and-a-half years, the Statue of Liberty is opening its crown to visitors, offering a unique glimpse of the sculpture’s structural underpinnings, as well as a sweeping bird’s-eye view of New York Harbor.

Guests to the island can either climb 215 steps or take an elevator to the 360-degree outdoor observation deck that is the statue’s pedestal. But there is no lift beyond that point—to reach the crown visitors must climb an additional 162 steps up a narrow double-helix spiral staircase. (The National Parks Service, which oversees the monument, warns against visits for anyone with heart or respiratory conditions, mobility impairment, claustrophobia, or vertigo.)

However daunting the journey may sound, it is the only way to explore the statue, which was designed by French sculptor Frédéric Auguste Bartholdi with interior metal framework engineered by Gustave Eiffel.

The patinated exterior is made of some 300 copper sheets just .09 inches thick—about two U.S. pennies together. Workmen shaped the statue using the repoussé method, heating the copper and beating it against a wood mold to achieve the desired shape. The double helix staircase that leads to the Statue of Liberty’s crown. Photo courtesy of the National Parks Service.

Visiting the crown provides an up-close look at the inside of the statue’s skin and its armature supports—originally iron, but replaced with steel during renovations ahead of its 1986 centenary—an ingenious design that bears the weight of the copper while withstanding the strength of the wind.

A gift from France to the United States conceived by anti-slavery activist Édouard de Laboulaye, the Statue of Liberty has been a National Monument since 1924, and has become a symbol of freedom around the world. United States Park Ranger Kenya Finley looks out the window of the crown of the Statue of Liberty during a media tour May 20, 2009. Photo by Timothy A. Clary/AFP via Getty Images.

Crown tickets, which costs $24.30 for general admission, went on sale today with Statue City Cruises and are already sold out for the rest of the month.

“Today was a soft opening with limited ticket availability through the end of October,” National Parks Service spokesperson Jerry Willis told the Daily Mail. “We will be doing an official crown reopening on October 28, the 136th anniversary of the statue’s dedication in 1886.”

Visits are restricted to groups of 10 at a time, with about six groups per hour, and include roundtrip ferry service from New York’s Battery Park or New Jersey’s Liberty Park. Visitors also get access to Liberty Island’s Statue of Liberty Museum, which opened in 2019 after a $100 million renovation, and nearby Ellis Island, home to the National Museum of Immigration. The seven-pointed crown has been closed since March 2020, at the onset of the pandemic. (It was also closed for nearly seven years following the 9/11 attacks in 2001.) Liberty Island’s grounds reopened in July 2020, followed by the statue’s observation deck a year later.

To enter the statue’s torch, which was replaced in 1986 for the statue’s 100th birthday, guests must climb a 40-step ladder. Public access has been restricted since 1916, when a munitions explosion on what was then Black Tom Island, believed to have been triggered by German agents, caused $100,000 in damage to the monument.