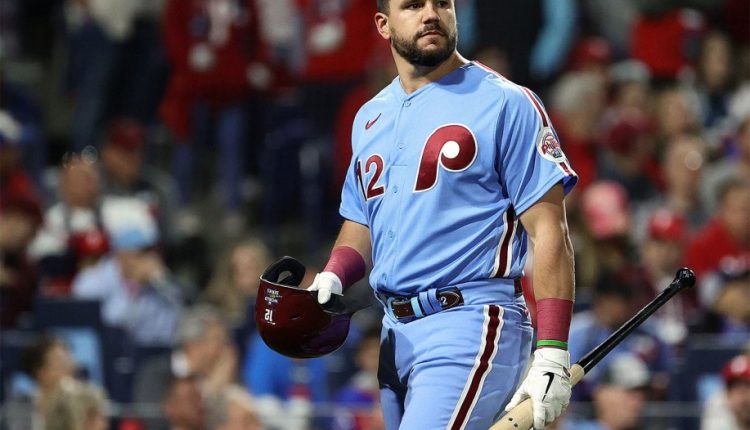 Life comes at you fast in the World Series. Just three days ago, the Philadelphia Phillies were on top of the world, having turned Game 3 into their own personal homecoming party with a 7-0 shellacking of the Houston Astros. But that was before Houston turned the tables: First, a combined no-hitter in Game 4, then a nail-biting win in Game 5 to grab a 3-2 series lead. With two chances to clinch the title at home this weekend, Houston now carries an 83 percent championship probability according to the FiveThirtyEight forecast.

If Philadelphia is going to defy those odds, it will need a healthy dose of its familiar gate-crashing formula — one that has taken it from wild card to World Series in a manner unlike most underdogs. Whereas the typical long shot’s path requires leaning on overlooked edges and making the clean play, this club has taken a different tack. What they’ve done better than every favored opponent they’ve met is to make use of good, old-fashioned brute force. The 87-75 Phillies are two wins away from a title because they hit the home run, plain and simple — and championship or no, they’ve provided baseball’s imperfect hopefuls a new blueprint. Forget zigging where the favorites zag. Zag harder.

Sure, Philadelphia’s long-maligned defense has become slightly less ruinous in October. But it still turns routine grounders into adventures, and first baseman Rhys Hoskins (two postseason errors and plenty more coulda-beens) is still looking for that hole in his mitt. The Phillies’ good-as-anyone top-line starters, Aaron Nola and Zack Wheeler, have over the postseason alternated lockdown performances with big ol’ biffs. And even before they were no-hit by four Astros in Game 4 and held to two runs in Game 5, they didn’t have anyone mistaking them for old-school slap hitters. In 2014, another wild-card-to-World-Series interloper, the 89-73 Kansas City Royals, came within 90 feet of a championship without so much as a single 20-home-run hitter on the roster, instead relying on their collective speed and contact skills, a trio of relievers and a safety net of an outfield. They were a baseball morality play, the small stuff showing up big.

“The desire to do something special, to do something great, is a passion,” Phillies owner John Middleton told the New York Times’ Tyler Kepner in the spring of 2019, after his team had shelled out $330 million for Bryce Harper, a move that foreshadowed in scale and style a subsequent extension for homer-happy catcher J.T. Realmuto and this past offseason’s signings of sluggers Kyle Schwarber and Nick Castellanos. “It’s not grounded in business logic, it’s not grounded in baseball analytics.”

Setting aside Middleton’s narrow definition of the word — total homers is as much an “analytic” as Ultimate Zone Rating — the statement now rings with irony. The 2022 Phillies were neither special nor great for the whole of the regular season, finishing a very distant third in the NL East and sneaking into their first postseason in a decade only via a wild card spot that didn’t exist a year ago. But in the crucible of October and November, they’ve struck a what-Middleton-means-by-analytics gold mine. As impossible velocities abound and contact gets rarer — this postseason has seen a .212 sportwide batting average, down from .243 in the regular season — playoff baseball becomes a question of who can make that contact count most. In a postseason where teams who leave the yard more than their opponents have won at a 78.6 percent clip, the Phillies have done so more than anybody, their 23 dingers sitting seven clear of the Astros’ total. They’ve won all seven games in which they’ve out-homered their opponents. Middleton’s indulgence has taken on “business logic,” becoming an odds-evening efficiency.

With rare exceptions (Wheeler’s 13 innings of two-run ball in the NLCS, Castellanos’ “Solid Outfielder” Halloween costume), the indelible images of Philadelphia’s playoff run are of long parabolas and flung bats. There was Hoskins, two days after misplaying a grounder in a series-tying loss to Atlanta in the NLDS, clubbing a Spencer Strider four-seamer to left for a 4-0 lead in the pivotal Game 3 and spiking his lumber in vindication, getting the Phillies on their way to upsetting the defending champs. There were Harper and Schwarber, in a tense NLCS opener against San Diego ace Yu Darvish, going yard in keeping with their respective characters: the former swiping an outside fastball over the opposite-field fence, the latter Popeye-ing a do-nothing breaker halfway to Mars. There was Harper more or less wrapping up that championship series with another oppo shot, and Realmuto paying off the Phillies’ five-run comeback in Game 1 of the World Series with one of his own.

A highlight reel can’t always render a team’s soul, but that one does; the Phillies go, and will go, exactly as far as the long ball takes them. Philadelphia trails Houston in pretty much every non-tater category; the Astros have the lower postseason ERA (2.38 to 3.17), the higher OBP (.301 to .296) and far fewer errors (three to seven). At present standing, the World Series has the mood of a referendum, the baseball gods rewarding the well-rounded club and punishing the one-note one. While Cristian Javier blew fastballs past the Phillies’ bats in Game 4, the Astros’ offense put up their five-run fifth inning without anything heartier than a double, and when the Phillies threatened late in Game 5, first baseman Trey Mancini speared a sharp grounder to end the inning.

Still, Philadelphia — a team that fired its manager in June and that lost 17 of its last 31 games down the stretch — trails by the slimmest margin possible on the sport’s biggest stage, with an ace on the mound for Game 6 in Wheeler and a lineup full of snoozing giants supporting him. In other words, they have the best chance a team like theirs could hope for. “I don’t give a shit,” Schwarber said after the combined no-hitter on Wednesday night. “Nope. Move onto tomorrow.” It is the confidence of a particular type of underdog, one that knows that, whatever else it lacks, it doesn’t want for a game plan.

The degree to which these faulty, beefy Phillies become a part of baseball lore depends on whether they can bash their way back to two straight wins this weekend. But in a certain sense, their rewriting of the postseason playbook — or at least their adding of a chapter to it — has already occurred. In the offseason to come, a number of just-alright clubs will choose how to allocate their resources in the hopes of contention, weighing bullpen depth against on-base guys, an ace starter against a Gold Glove defender. None can realistically hope to be as great as the Astros. But the Phillies, whether they bring home a trophy or not, propose an alternative to all that fretful tinkering. Load up on the loudest bats you can find, and when they’re turned up you won’t be able to hear anything else.

The Rumor That LVMH Is Buying Gagosian Just Won’t Die. There May Be Something to It—But Not What You Think