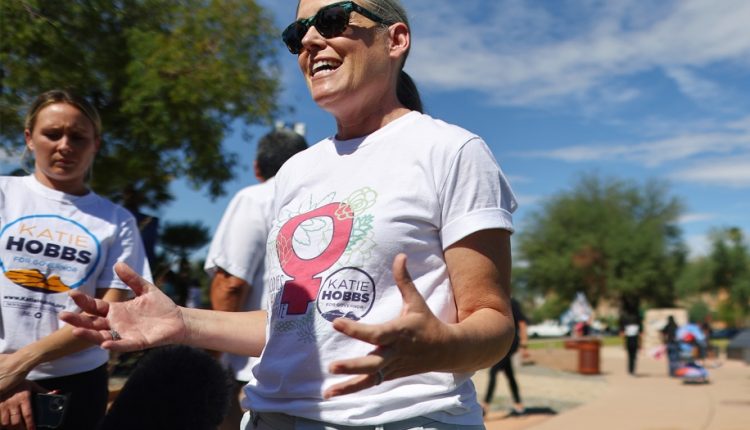 For political candidates from underrepresented groups, progress can be uneven — and the 2022 midterms could be a great example of that, at least when it comes to women candidates.

On the one hand, it looks like we’re heading for a record-setting year for women in governors’ races. According to our forecast, there are 12 female gubernatorial candidates who have at least a 50-in-100 chance of winning in FiveThirtyEight’s Deluxe forecast, as of Tuesday at 12 p.m. Eastern. If each were to win their election, it would be historic. Up until now, only nine women have simultaneously occupied governors’ mansions. And two of the most competitive governors’ races — in Oregon and Arizona — have only women as major candidates, which increases the odds that the record will be broken this year.

But the outlook isn’t so good for women running for Congress. Several of the most vulnerable congressional candidates are women, including many Democratic House candidates who flipped seats in 2018. And it’s quite possible that the number of women in Congress will decline after the November elections.

So why do women candidates’ fortunes seem to be on the wane in some cases and not others? As we pointed out earlier this month, fewer women are running for Congress than in previous years — and the success of the previous two cycles may have made leaders in both parties feel like there’s less of a need to focus on getting more women elected. “When you talk about the pink wave or the ‘Year of the Woman,’ it makes people think that things are done, that women have taken over,” said Kelly Dittmar, an associate professor of political science at Rutgers University and the director of research at the Center for Women and Politics, “when in reality they’re still less than 30 percent of the U.S. Congress.”

Women are underrepresented at every level of government, but it’s proven particularly hard for female candidates to win governorships. In the country’s history, only 45 women have served as governors, and there are 19 states that have never had a female governor.

Those numbers seem very likely to change this year. There are 25 women affiliated with a major party running for governor, and 12 of them have a 50-in-100 or greater chance of winning their race, according to our Deluxe forecast as of Tuesday at 12 p.m. Eastern. (All data in this story is as of that same date and time.) Of course, their odds vary a lot. But as the table below shows, nine women are at least likely to win their races — which means they have a minimum of a 75-in-100 chance of winning. Two of those candidates could set records for their state: Democrats Maura Healey of Massachusetts and Kathy Hochul of New York, both of whom would become the first woman elected as governor of their states.1

These gains are significant because even as the number of women in Congress and state legislatures has steadily increased, the number in governors’ seats has remained low. That’s partially because there simply aren’t a lot of those seats to fill, but it’s also because voters’ prejudice against female candidates are particularly strong when women run for executive-level offices, like governor or president. Several decades of social science research has found that voters are more comfortable electing women when they run to be part of a group — like a state legislature or Congress — rather than a position of high-level leadership, although some evidence shows that Democratic-leaning voters have become more open to the idea. Voters are especially likely to associate such roles with stereotypically masculine behaviors like aggression and initiative, which may cloud how they see women who run for those offices. And then there’s the fact that the decision to run for office can involve more considerations for women than it does for men, such as balancing their priorities at home, and many women may choose not to throw their hat into the ring for prestigious offices like governor.

There are a few reasons why this might be changing. Dittmar pointed out that high numbers of women ran for governor in 2018 as well — so in that sense, the trend is just continuing this year. And as more women get elected to lower-level offices, the bench of potential nominees with electoral experience is growing. For example, Hobbs currently serves as the Arizona secretary of state — a role that left her well-positioned to run for governor.

More women running for governor — and winning — is a noteworthy change in the status quo. But it’s not a full transformation, particularly because the pool of women likely to win gubernatorial races is overwhelmingly white.2 Among the 25 women running, only four are candidates of color — and three of them have very low odds of winning. So it’s likely that Michelle Lujan Grisham, the incumbent governor of New Mexico, will be the only woman of color elected governor this year.

The outlook isn’t as good for women in Congress

This year, it’s possible the number of women in Congress will hold steady — but it’s more likely that women’s representation will decrease. According to FiveThirtyEight’s Deluxe forecast, there are 124 women running for House seats and six women running for Senate who have a 50-in-100 or greater chance of winning their race. If a woman won in all those races,3 there would still be 147 women in Congress, including the 19 female senators who are not up for reelection — the same number as now. But as the table below shows, a lot of those House candidates are in very close races.

Several vulnerable candidates are Democratic women who flipped seats in the 2018 election and are now facing strong challengers in a year when the environment is favorable for Republicans. Some of those women — like Virginia’s Rep. Elaine Luria and Pennsylvania’s Rep. Susan Wild — are running against other women, so even if they lose, another woman will take their place. But others, like Iowa Rep. Cindy Axne, are running against men. And some Republican women are vulnerable too. For instance, Rep. Yvette Herrell of New Mexico flipped her House seat in 2020 but is only slightly favored to win against Democrat Gabriel Vasquez this fall.

It’s far from guaranteed that women will increase their numbers in Congress. If we narrow our criteria and look only at the women candidates who are likely to win their races — that is, the candidates with a 75-in-100 or greater chance of winning, according to the Deluxe forecast — the number of women in Congress shrinks to 135.4 That would mean a substantial reduction in the number of women serving.

The number of women of color in Congress could increase, though, depending on how some toss-up races turn out. Fifty-three female House candidates of color are running in races where they have at least a 50-in-100 chance of winning. An additional senator — Tammy Duckworth of Illinois — falls into that same range of chance. So if all of those candidates win, the number of women of color in Congress would increase from 49 to 54 — although, of course, not all of these candidates are guaranteed to win.7

Whatever happens, we’re clearly not heading for another banner year for women in Congress. Dittmar said that could be for a lot of reasons, including that several now-incumbent women won competitive races in 2018 (and held on in 2020), which leaves more women to defend their seats this year. Democrats may also have been more reluctant to run in what would historically be considered a Republican year, she said, and this may have had a disproportionate impact on women, who are more likely to run as Democrats. And all of the focus on women’s victories in 2018 and 2020 may have created a false sense of parity, leading party leadership to focus less on elevating female candidates, she said.

But Dittmar also cautioned against drawing too many conclusions from a single year. She pointed out that women’s successes in 2018 are visible in some of this year’s candidates — like Summer Lee, a progressive Democrat who is clearly favored to win the race for Pennsylvania’s 12th District. Lee was elected to the Pennsylvania state Legislature in 2018 and won the nomination in a competitive Democratic primary earlier this year. Now, she’s poised to become the first Black congresswoman from Pennsylvania.

“There are lots of different kinds of success stories for women — we shouldn’t just look at the topline numbers,” Dittmar said. “You look at young women of color who got out there and ran for office and, four years later, will be in Congress. We have to pay attention to those stories too.”

The Most Important Elections Of 2022 Could Be In State Legislatures