The Dallas Mavericks Are Different From Last Year. That Doesn’t Mean Worse. 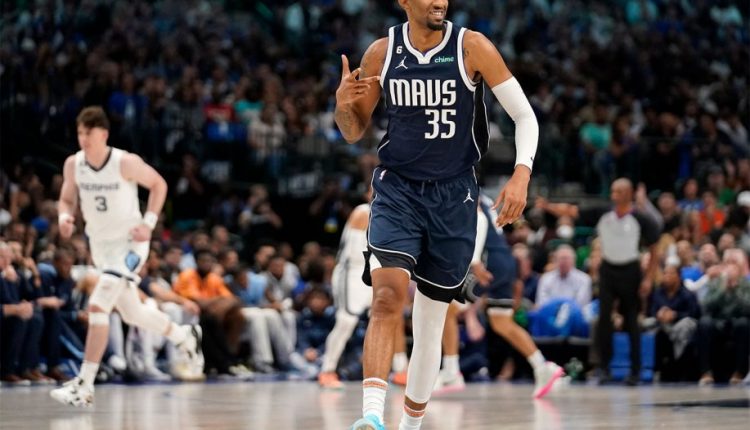 “I don’t know if you saw me or not, but I was having fun out there.”

With those words after a win over the Memphis Grizzlies — in which he scored 25 points — Christian Wood summed up the Dallas Mavericks’ season only a handful of games in.

There are spectacular sitting-on-his-backside passes from Luka Dončić to an open man; dimes to big man JaVale McGee; alley-oops from Dončić to Wood; corner threes from Josh Green; threes from anywhere on the court by a now-healthy-again Tim Hardaway Jr.; there are even big-time contributions from two-way players.

Oh, and the Mavs have sold out their season tickets for the first time in a decade.

It’s early in the season, so the sample size is small, but dare we ask the question: Is this version of the Dallas Mavericks better than last season’s team, which made a surprise trip to the Western Conference finals? Despite dropping two of its first four games, this Mavericks squad appears a little more balanced, in sync and in harmony with one another on the court.

Many, including respected media outlets like ESPN and The Athletic, didn’t think that would be the case after Dallas’s offseason. In fact, the team was sorely maligned by its loyal fan base, the MFFLs, for not hanging onto last season’s second-leading scorer Jalen Brunson, who joined the New York Knicks. They also side-eyed general manager Nico Harrison and team officials for signing the 34-year-old McGee to a large contract, and for not making splashier free-agency moves.

As a result, they were generally picked to land in the lower half of the Western Conference this season, languishing somewhere between sixth and eighth place.

Forward Dorian Finney-Smith was not surprised. “It’s the same thing as last year. I still don’t feel like we get the respect that we should,” he said recently after practice.

“I like being the underdog — even though I feel like people in the league know we’re not anything to mess with. I think they know we’re talented and they’re going to come to Dallas trying to beat us.”

“I think we’re just worried about ourselves and making sure that we’re prepared and ready to go,” he said. “Everybody has early predictions, and I don’t know if anybody had us going to the Western Conference finals last year, so we’ll see.”

“Sixth and eighth [in preseason projects]? That’s better than nine and 10, so we’ll see what happens.”

Kidd has a point. Absolutely no one — like, not a soul — at the beginning, middle or end of the 2021-22 regular season had the Dallas Mavericks in the conference finals going up against the juggernaut Golden State Warriors. But that’s exactly where the feisty team found itself.

After losing to the Warriors in five games, the Mavs made moves to address needs like rim protection, rebounding, physicality and perimeter defense. Though it was nothing earth-shattering, Harrison and his team have assembled a roster that potentially has a higher ceiling than last year’s — Dallas’s current full-strength playoff RAPTOR rating in the FiveThirtyEight forecast model (1670) is higher than it was at the end of the 2022 playoffs (1651) — and who seem to fit together better as well.

“Right now this is a new team, we don’t know how good this team can be,” Harrison said. “We did get better in the offseason. JaVale will be great for us, he gives us something we didn’t have last year: shot blocking and high-level rebounding.”

“Wood is a guy that can score at that position and will just add to what we do and it also makes us a different team,” he continued.

Wood is maybe the biggest reason why Dallas could exceed its previous iteration. Picked up in a trade from the Houston Rockets, the 6-foot-10 center is already paying huge dividends — to that point that it looks like Luka may have finally found the Robin to his Batman.

In Dallas’s season opener against the Phoenix Suns, Wood scored 25 points — including 16 in a row for the Mavs — and added eight rebounds. Not to outdo himself, he proceeded to score 25 points with 12 rebounds against the Grizzlies. In doing so, Wood became the first player in Mavs history to score at least 25 points in each of his first two games. And, oh yeah, he did all of this coming off the bench. In that role, Wood appears to be the extra impact player the team’s offense needs to be effective.

That is, if he doesn’t play his way into the starting lineup more often.

“I’m just trying to play hard and do the best I can in the role that I’m in, and that’s really about it,” Wood said. “I’m motivated coming off the bench or starting — either way. I’ve said that before.”

Of course, the other big factor for the Mavs is just how effectively they can make up for the significant scoring they lost from Brunson.

To account for that, the Mavs are hoping more of their offense will come from 30-year-old Hardaway Jr., who was averaging 14.2 points a game when he fractured a bone in his foot in January. He missed the back half of the season, but is back and healthy. Mavs fans have already seen the 3-point shooter and scorer return in even better form. He tallied 16 points in Saturday’s win over the Grizzlies and was a perfect 8-of-8 from the free throw line.

Between Wood and Hardaway, Dallas can find scoring outside of Dončić. And despite the eyebrows raised by his acquisition, Dallas’s rebounding and interior defense should be bolstered by McGee — older, wiser and with three championships in tow (plus an Olympic gold medal) since his first stint with the Mavs back in 2015-16.

After finishing 24th in rebounding last season with just 43 per game, the Mavericks can pair McGee — who averaged 6.7 rebounds, 1.1 blocks in his 15.8 minutes per game with the Suns last year — with Wood to make for an intimidating frontcourt unit.

Together with other smaller moves, all of this has Dallas feeling like it can be as good or better than it was before, particularly in the areas of height, depth and rebounding, despite the offseason shake-up.

“Obviously we lost JB, he was great for us. He gave us so much, you can’t really replace the stuff he gave in one person,” Harrison said of Brunson. “But no one talks about Timmy Hardaway, he’s a scorer you’ll get your points from there. You’ll get your rebounding and blocking shots from JaVale and you’ll also get scoring from Christian so I think you get it all in a different way.”

Still, some think they are still missing a bona fide second superstar. Like Dirk Nowitzki before him, Luka is the only big name on a roster that many believe needs another headliner.

But Harrison is not convinced.

“I don’t think it’s just about having All-Stars. There’s tons of teams that have a bunch of All-Stars and they were sitting at home watching us play [in the Western Conference finals],” Harrison said this summer.

With a retooled roster focused around that fit, the question now is can they get back to the NBA’s version of the Final Four.

“There’s a lot of things that have to happen,” Harrison said. “One, we have got to stay healthy. We’ve got to make sure that we keep the same connectedness that we had last year.

But if they do get that luck — and the FiveThirtyEight model gives Dallas a 17 percent shot at winning the West, second-best in the conference — this Mavs team has the ingredients to make another run this season, maybe going even further this time around.

The Back Room: Beyond Imagination

Here’s What We Know About Gennaro Sangiuliano, Italy’s New Culture Minister, and What the Country’s Art Scene Can Expect