The Carnegie International Tackles U.S. Hegemony. But It Doesn’t Do Much to Stand Out on the Global Biennial Circuit 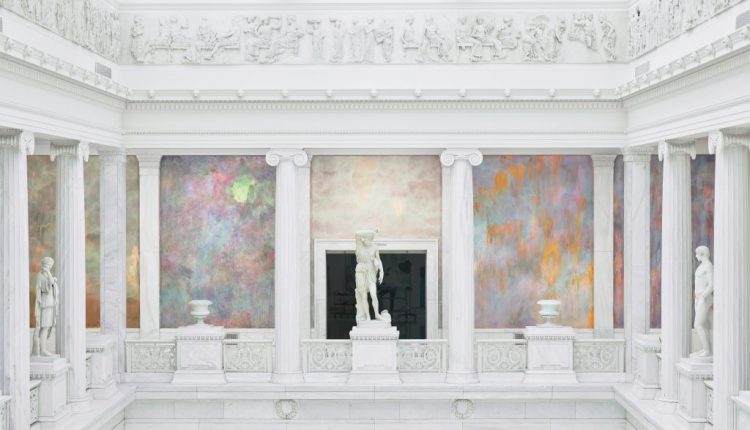 Walking into OK Studio by Julian Abraham “Togar” at the Carnegie Museum of Art feels like stepping out on the dock of a seaside marina on a movie set. Automated musical instruments—a shruti box, gong, ocean drums, keyboards, and synthesizers—jingle in sequence. The scene simulates the vibe of a jam session, fake but chill. A single-channel video shows a person holding a boom mic over water as it laps the shore. Bright paintings of puns and idioms complete the surfer-stoner vibe, with words rendered in neon acrylic for just a pinch of urgency.

Togar’s casual ballet mécanique is immersive, inviting and, importantly, open to interpretation—and at the 58th edition of the Carnegie International, the oldest exhibition dedicated to international contemporary art in North America, it stands almost alone. The show, titled “Is it morning for you yet?”, features more than 100 artists and collectives from around the world. This truly global suite of artworks gives no special priority to American artists (or indeed, American viewers). Many artists in this survey shine, but its composition seems meant to hold viewers at arm’s length, and keep them there. There is an overarching political theme to the show, an investigation into the role of the United States in enforcing the international order since 1945. It would be too broad to describe the organizing principle as anti-imperialism or decolonization. Works by Édgar Calel, Anh Trần, and dozens of others point specifically (if sometimes obliquely) to decades of U.S. hegemony.

Thu Van Tran’s Colors of Grey (2022), for example—a series of gorgeous frescoes painted in situ in the museum’s neoclassical sculpture hall—draws its striking gem tones from the “rainbow herbicides” that the U.S. military sprayed over millions of acres of Vietnamese land during the Vietnam War. The link between the pastel-washed walls and ionic columns transported me to the Monet installation in Paris at the Musée de l’Orangerie, but the dark reference here is Agent Orange. Mohammed Sami, Installation view of The Fountain I (left) (2021) and Abu Ghraib (right) (2022) in the 58th Carnegie International, Courtesy of the artist and Carnegie Museum of Art; photo: Sean Eaton

In the same Carnegie atrium, an arresting sequence of paintings by Mohammed Sami captures stark vignettes of the chaos wrought by the U.S. war in Iraq. Sami’s depiction of lace curtains over a boarded-up window in 23 Years of Night (2022) is haunting, aching, and almost abstract; more direct but still subtle is Abu Ghraib (2022), a painting of a hanging coat that throws a shadow in the shape of a hooded victim from the notorious photos that revealed the secret U.S. torture program nearly 20 years ago.

The Carnegie commissioned almost all of the works on view in this exhibition, so the thesis of curators Sohrab Mohebbi, Ryan Inouye, and Talia Heiman may be more forceful than that of other biennials and triennials. The curators reinforce the theme with diverse works in every medium, from every continent. Nestled within are smaller surveys—mail art from Mexico City, dissident work from Tehran, an entire survey from Santiago—as if the International had swallowed all its satellite shows. Trương Công Tùng, Installation view of the state of absence – voices from outside (ground) (2020–ongoing) and Shadows in the garden #3: (Do, Re, Mi, Fa, Sol, La, Si, Do) (wall, 2021–ongoing) in the 58th Carnegie International, Courtesy of the artist and Carnegie Museum of Art; photo: Sean Eaton

At times, the program feels reductive. While the curators note that Tith Kanitha, who was born in Phnom Penh in 1987, began her career long after U.S. military operations or Cambodia’s civil war, the show suggests that her work “acknowledges the enduring presence of loss and destruction decades later.” That might be the case, but her coiled-wire sculptures and blotchy ink paintings point in other directions. The show consistently guides viewers toward a way of looking that feels significant, historically informed, and often didactic: a righteous and cerebral yet emotionally limited framework.

Other decisions about framing are striking. “Is it morning for you yet?”—the title for the 58th edition of Pittsburgh’s contemporary-art survey—draws its name from the Kaqchikel saying for “good morning.” That’s a Mayan language spoken by an Indigenous people native to Guatemala, although the full explanation isn’t exactly clear in the show. Museum labels that list places of origin such as the Syilx Nation without any hint about contemporary geography left me reaching for my phone. (Krista Belle Stewart, whose minimalist ceramics command attention, is a citizen of the Syilx Nation, a transnational tribal territory straddling the Canada–U.S. border.) James “Yaya” Hough, A Gift to the Hill District (2021–22). Courtesy of the artist and Carnegie Museum of Art; photo: Sean Eaton

This isn’t just a grumpy edit about house style (although it is that) or progressive pieties about language (ditto) but a point about the reference set that curators expect viewers to arrive with. Such a global exhibit could be at home anywhere in the world; certainly the intended audience is highly educated, well traveled, and acutely metropolitan. But this show is taking place in Pittsburgh, and to the extent that its viewers will hail from the Steel City—as the overwhelming majority of them will—it seems deliberately off-putting to offer so few handholds for ordinary, curious viewers who don’t hopscotch the global art circuit.

In a sense, the curators are having it both ways. Improbably, they trust viewers to know that Probolinggo and Yogyakarta are cities in Indonesia or that Chi Xot is another name for San Juan Comalapa in Guatemala. (The poker-faced wall text for the utterly enchanting collages by Ali Eyal lists his birthplace as The Forest—he works in Small Farm—but in fact the Iraqi artist grew up in Sadr City.) At the same time, the Carnegie offers the simplest geopolitical reading, the narrowest identity frame, for a huge tent of artists and art histories. LaToya Ruby Frazier, More Than Conquerors: A Monument For Community Health Workers of Baltimore, Maryland (detail, 2021–22) in the 58th Carnegie International, Courtesy of the artist and Carnegie Museum of Art; photo: Sean Eaton

Maybe all -ennials have two audiences: the elites who fly in for the gala and the visitors who file in over the duration. Today, the calendar for the global class is crowded, and an encyclopedic museum in a legacy city has to compete to be considered. Yet the Carnegie could truly distinguish itself by turning toward its other audience, something few museum programs are doing.

To be sure, the museum doesn’t neglect its host city. There is a searing photo installation by LaToya Ruby Frazier, a native of Braddock, Pennsylvania, and the winner of the museum’s top prize. The Carnegie also furnished a handsome new mural by Pittsburgh’s own James “Yaya” Hough in the city’s Hill district. More confusingly, a Berlin collective called terra0 turned a tree planted on the campus of the Community College of Allegheny County into a 501(c)4 that grows NFTs—or something.

All the while, the ranks of regional exhibitions that promote working-class, emerging artists from around the country only thin as the number of globally oriented art festivals only grows—and comes ever closer to approaching a form of cultural consensus. And as workers at the Carnegie Museum of Art protested outside the exhibit’s opening over the museum’s sub-living wages, the values on display in the International felt incomplete or even insincere. Distant Possessions (2022), a piece by Pio Abad—his contributions to the show are sensationally wry—is one that comments on the museum’s specific role in the cycle of production. Late in the 19th century, steel magnate and museum namesake Andrew Carnegie complained about the U.S. government’s efforts to annex the Philippines, arguing against engaging with Filipino people explicitly. “Americans cannot be grown there,” he wrote. Those words appear, in the font from the museum’s façade, as a mural over a gallery archway.

Perceptive, biting—and site specific. In his day, Carnegie liked to acquire plaster casts of temples and other architectural wonders of antiquity. Even the space that contains them is a facsimile, modeled after the Mausoleum at Halicarnassus in Turkey. Visitors can’t miss it. Back then, such a collection was a manifestation of cultural power. It’s not ironic that the same museum is host to the International—it’s familiar.

The 58th Carnegie International is on view at the Carnegie Museum of Art and various locations in Pittsburgh through April 2, 2023.