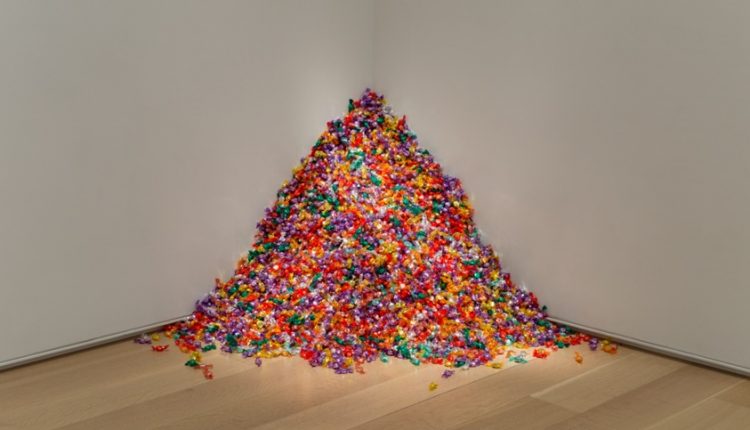 The Art Institute of Chicago has been accused of erasing Felix Gonzalez-Torres’s gay identity and AIDS diagnosis after changing the wall label for a beloved work by the artist in its collection.

Last month, a Twitter user pointed out that the museum had swapped out the wall text for Gonzalez-Torres’s Untitled (Portrait of Ross in L.A.) (1991), leaving out a previous reference to the artist’s late partner, Ross Laycock, who died from an AIDS-related illness the same year the piece was created. (González-Torres himself died from complications related to AIDS five years later, in 1996.)

“The erasure of Ross’s memory and Gonzalez-Torres’s intent in the new description is an unconsciable [sic] and banal evil,” the post read. It has since been retweeted nearly 4,000 times.

One of the most recognizable works of the 1990s, Untitled comprises 175 pounds worth of shiny, wrapped candy—a figure that represents Laycock’s ideal body weight. Gallery goers are encouraged to take a piece as they contemplate the resultant loss to the artwork’s form—and, metaphorically, Laycock’s body, as it battled illness.

For years, the label installed alongside Untitled at the Art Institute made mention of Laycock, his AIDS diagnosis, and the fact that Gonzalez-Torres conceived the piece as an “allegorical portrait” of him. But when the artwork went on display again this summer—the first time since 2018—visitors noticed that a different text accompanied it.

The new label explained that the artwork’s 175 pounds “corresponds to the average weight of an adult male,” not specifically Laycock’s, and that, “as visitors choose to take candy from the work, the volume and weight of the work decrease.”

When I don’t renew my @artinstitutechi membership for the first time, it’s because AIC desecrated “Untitled” (Portrait of Ross in L.A.) by Felix Gonzalez-Torres. The erasure of Ross’s memory and Gonzalez-Torres’s intent in the new description is an unconsciable and banal evil. pic.twitter.com/qzwUaja8s8

“How can the Art Institute engage in such a brazen act of queer erasure?” wrote Zac Thriffiley in an op-ed published September 28 in the Windy City Times, an online publication that describes itself as “the voice of Chicago’s gay, lesbian, bi, trans, and queer communities.”

“By removing any reference to HIV/AIDS and queer sexuality,” Thriffiley went on, “the curatorial staff and the Institute, as a whole, have stripped the work of its personal resonance and political power for the many, many visitors not already familiar with the work.”

Last week, the Art Institute added a new label to Untitled, a spokesperson for the museum confirmed. The amended text—which has also been updated on the institution’s website—once again addresses Laycock and AIDS, though retains much of the language from the second label.

“In concert with artists and their estates/foundations, we continually update labels to introduce different types of context,” the Art Institute representative said. “In this case, we heard visitor feedback to the previous label and took the opportunity to revise the text.”

This is not new. At least since the Estate has been represented by David Zwirner, FG-T’s own identity, biography, and original stated intents for the work have been downplayed or omitted entirely, as in the press release for their first show in 2017 https://t.co/AreGG7GC0q https://t.co/Pfy7pr0pih

In response to the controversy, some social-media users have pointed out that other recent presentations of Gonzalez-Torres’s work have similarly omitted language around the AIDS epidemic and the artist’s homosexuality.

The press release for David Zwirner’s 2017 exhibition, a show that spanned Gonzalez-Torres’s career and included many of his best-known works—Untitled (Portrait of Ross in L.A.) among them—made no mention of the artist’s sexual identity, AIDS diagnosis, or Laycock. Picking up on this, the critic Darren Jones wrote at the time that the organizers of the show “are perpetrating a shameful act of redaction, and a reckless disregard for what most admirers of Gonzalez-Torres’s work hold dearest, particularly in New York City.”

The exhibition, he went on, “denies the very communities to which [the artist] belonged, and continues to inspire.”

In an interview with Hyperallergic, Rock Hushka, a curator who included Gonzalez-Torres’s work in the 2016 exhibition “Art AIDS America” at the Bronx Museum, suggested the push to expand the narrative around the artist’s work might be driven by the Felix Gonzalez–Torres Foundation.

“The notion that you erase his personal biography, in any form, takes away half of what he was up to. But then there’s the other half of it being purely aesthetic,” Hushka said. “The whole idea of Felix’s work is that those two aspects are inextricably combined. You should never remove one or the other.”

Representatives from the Felix Gonzalez-Torres Foundation—which is co-operated by David Zwirner and former gallerist Andrea Rosen—did not respond to a request for comment. Notably, two high-ranking Art Institute of Chicago employees, deputy director Ann Goldstein and director James Rondeau, are listed as fellows of the foundation’s advisory board.

An Art Teacher Stashed Some Drawings by Famed Artist L.S. Lowry in a Cupboard Years Ago. Now They Could Fetch $60,000 at Auction

A Disgruntled Tourist Smashed Two 2,000-Year-Old Statues in the Vatican Because He Was Denied a Meeting With Pope Francis