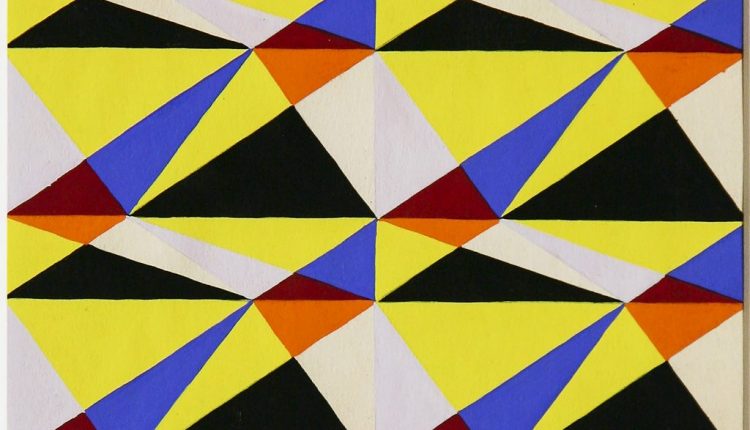 What You Need to Know: David Richard Gallery is presenting a solo exhibition of work by Dean Fleming (b. 1933) titled “Fourth Dimension.” Homing in on a distinct period of the artist’s career, the exhibition looks closely at works dating from 1964 and ’65, which together highlight a transformation of Fleming’s artistic style. Over those two years, he moved from painting intricate geometric patterns toward greatly simplified forms, relying on minimal yet bold fields of color organized within severe vector angles. Though there were many inspirations for this shift, the artist has cited two primary visual influences: Josef Albers’s work of the 1940s and ’50s and Al Held’s “Concrete Abstractions” series from between 1960 and 1961. His involvement as a founding member of the artist collective and exhibition venue Park Place Gallery in New York too provided fodder, as it promoted material experimentation and exploration of literal and illusory space.

Why We Like It: The exhibition superbly illustrates the profound evolution that Fleming’s work underwent in the pivotal years of 1964 and 1965. Pieces like Tunis (1964) employ an elaborate, multicolored patchwork compositional strategy that chimes with the contemporaneous Op Art movement. But, when juxtaposed with a work like 65 Black Yellow Red (1965), the stylistic development is stark. Using a restrained color palette and precise lines and angles, Fleming touches on both Albersian color theory and hard-edge abstraction. What’s more, Fleming’s work consistently engages with the dichotomy between real and perceived space. Here, the tapering red lines on the bottom and right side of the canvas could be read as either a flat field of color, or a perceptual flat edge, delineating a foreground. The exhibition presents Fleming’s experimental aptitude within his own oeuvre, but also a record of the greater art-historical milieu of the time.

According to the Gallery: “The inspiration for Fleming’s move to the open, hard-edge, and Minimalist compositions in 1965 had been brewing for quite some time. He had a deep interest in understanding the complexities of, and picturing, space in multiple dimensions on a two-dimensional canvas, and was fascinated by the concept and potential of the fourth dimension.…In a recent conversation, while looking back at the art scene in New York in and around 1965, Fleming noted two contributions that his then recent paintings made to that ‘scene.’ First, he stated, ‘These paintings [from 1965] are not pictures and not illustrations of something else, they do not represent anything other than what they are. The paintings were intended to be complete and entirely contained within the perimeters of the canvas, anchored to the outer perimeter. There was no ground, no voids, they were not floating in space.’ Regarding the second point, he said, ‘Another significant contribution of these paintings is they were shifting and dealing with illusion, but were simple compositions that oscillated between a flat, almost graphic quality one minute and then flip to something optical and three-dimensional the next, depending upon the viewer and their perceptions. This was in contrast to the Minimalist artists, who sought no emotion, no illusion and no content.’”

See works from the exhibition below. In Pictures: A New Blockbuster Show in Paris Reveals the Surprising—and Utterly Convincing—Connections Between Claude Monet and Joan Mitchell

‘Chicken Is Part of My DNA’: Celebrity Chef Jacques Pépin on How One of His Favorite Foods Inspired a New Series of Paintings