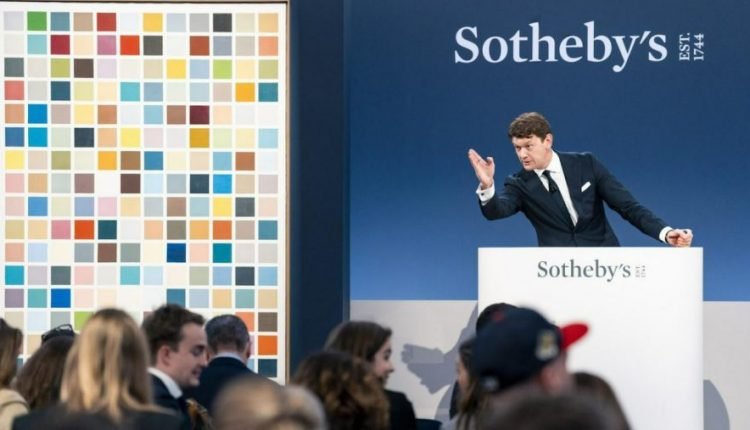 Sotheby’s held two back-to-back evening contemporary art auctions in its London saleroom tonight to capitalize on the crowds of collectors who flocked there for the annual Frieze fair.

Bidding on the roughly 50 lots on offer was solid if not always spectacular, and it’s safe to say US buyers continued to take advantage of the record strength of the dollar as compared with the British pound. “Are you talking exchange rates?” the auctioneer joked when one bidder seemed to be taking an extended pause.

The evening kicked off with a smaller offering of 17 works under the label “The Now,” which is comprised of ultra-contemporary art that auctioneer and international senior specialist Michael Macauley described as “the most exciting and coveted art of our time,” adding that it’s by artists who are “great talents.”

It realized £11.4 million ($13 million) near the high end of presale expectations, even without accounting for one lot that was withdraw, a work by Avery Singer shortly before the sale. And two lots, a painting by Jonas Wood, and a Banksy, were backed by irrevocable bids, or third party backers, in this section.

Oliver Barker, chairman of Europe, then took the reins for the 31-lot contemporary evening sale, which realized £85.7 million ($98.7 million). The fact that eight out of 39 lots, or 20 percent, were withdrawn prior to the sale seems to speak to some last minute jitters.

Seven lots in the main sale were guaranteed, two of which were direct by the house, while the remaining five were backed by irrevocable, or third party bids, meaning the house was once again able to offset some risk.

Nearly every female artist across both sales sold above their high estimates including eight out of ten in The Now sale, such as sought-after artist Flora Yukhnovich, whose painting Nobody Puts Baby in the Corner, inspired by the famous line in the film Dirty Dancing, sold for £1.6 million ($1.8 million), compared with a high estimate of £700,000 ($784,000). And all of the women artists in the main sale had prices that exceeded high estimates, such as Yayoi Kusama’s Infinity-Nets (QOTP) from the collection of Joel and Sherry Mallin, which achieved £3.4 million ($3.8 million) compared with a high estimate of £2.5 million ($2.8 million). The Kusama was one of 10 works sold this evening from the Mallin Collection, which together realized an above estimate total of £12.4 million.

James Sevier, Sotheby’s head of contemporary art for Europe, was upbeat, telling Artnet News via a phone interview following the sale: “There was great energy in the room and overall the energy has been great throughout the week. We’re really pleased with the results.” Sevier pointed out that the hybrid auction marked the first time in recent years that the auction house did not have to beam in activity from other salesrooms in places like New York or Hong Kong since international travel has returned to normal.

And despite the recent volatility in exchange rates, he noted that while it’s been a topic of conversation in the art world, “the thing that really has stood out this week at Frieze and at the auctions, is that collectors are looking at the object rather than the currency. I think the rarity, the freshness, the quality of the works on offer was much more a topic of conversation than anything else.” He added that the breakdown of registered bidders from the UK, the US, and the EU was nearly identical to that of last year. It was a painting by Nguyen that opened the evening, and the price smashed expectations. Kye, Semper Solus (2017) was estimated at £40,000 ($45,000) and was chased by at least four bidders to eventually sell for £453,600 ($503,700), more than ten times that level. Nguyen’s work, which clearly shows the influence of Italian Renaissance painters, has been acquired by the Whitney Museum in the past. For other hot artists, such as Jade Fadojutimi, interest was evident but prices were more in line with expectations. Fadojutimi’s The Misguided Thrill of Frills (2017) sold for £554,400, a healthy spike above the high £400,000 estimate.

Despite that Banksy was the top selling artist of the sale, the bidding patterns on the two works offered seemed to be resistant to the asking prices. Both sold despite missing their low estimates, on a hammer basis.

For instance, Love Is In The Air (2006), one of the artist’s most famous images showing a masked man about to launch a bouquet of flowers in a stance more typically seen with that of holding an explosive, hammered for £2.8 million ($3 million) to a Sotheby’s specialist on the phone with a client, as compared with a low-end estimate of £3.4 million ($3.8 million). The final price with premium £3.5 million ($3.9 million), helped get it into that territory. Final prices include premiums, estimates do not.

Love Is In the Air presumably sold to the third party backer who placed an irrevocable bid on the work at some point in the lead-up to the sale.

A major Francis Bacon painting, Three Studies for Portrait of Henrietta Moraes (1963) was the top seller of the main evening sale, and came with an illustrious provenance. It was snapped up by media mogul William Paley just months after it was painted and had been on long-term loan to the Museum of Modern Art since his death in 1990. It was sold to benefit MoMA and other charitable organizations. Barker opened the bidding action at around $19 million and it hammered to chairman of contemporary art Gregoire Billault, on the phone with a client, for $23 million. Presumably the winning bidder was also the third party backer as there did not appear to be competing bids. In similar trophy territory was Gerhard Richter’s 192 Farben (1966) said to be his first abstract painting, and which had been on long term loan in Hamburg, to the Hamburger Kunsthalle from 1997 to 2022. It carried an estimate of £13 million to £18 million ($14.5 million to $20 million) and was backed by a third party bid. At least three bidders pursued the work before it went to a Sotheby’s specialist on the phone banks bidding on behalf of a client, for a premium inclusive price of £18.3 million ($20.5 million).

There was strong interest in Frank Auerbach’s Head of J.Y.M. (1984-85), a portrait of Juliet Yardley Mills, and one that famously reflects the artist’s habit of only depicting subjects with whom he was extremely familiar. Sotheby’s called it “the absolute apex” of his critically acclaimed oeuvre. With a premium-inclusive price of £5.64 million ($6.3 million), it edged out the previous artist record of £4 million ($5 million), set just a few months ago in June, also at Sotheby’s London.

Sevier said he was particularly pleased with the price for the Auerbach, calling it “one of the very best paintings by the artist to ever come up,” as well as the result for the Richter. “We’re selling work that really defines 20th century art history tonight,” he said.

Competitive and sometimes drawn out bidding cropped up unexpectedly throughout the sale, such as for Juan Muñoz’s multi-part sculpture Conversation Piece (1997) which had an estimate of £800,000 ($896,000). Bidding opened at £550,000 ($616,000) and four specialists chased it for their clients on the phone before it eventually went to Sotheby’s senior director in London, Alina Davey, for £2.7 million ($3 million).

One unannounced change to typical auction protocol that created some confusion at various points in the evening was the recent shift to alerting the room of withdrawn lots only as the actual numbers come up, as opposed to making a presale announcement.

At one point, midway during the bidding on a major Anish Kapoor sculpture, an auction viewer seated in the room pointed out a discrepancy in the numerical listing order in the catalogue, to auctioneer Barker, who clarified that the withdrawn lot was a different work by Damien Hirst, before returning to the bidding action on the Kapoor, and asking out loud: “Now where was I?”

After 19 Bitter Days on Strike, the Philadelphia Museum of Art’s Union Has Reached a Tentative Deal With Management