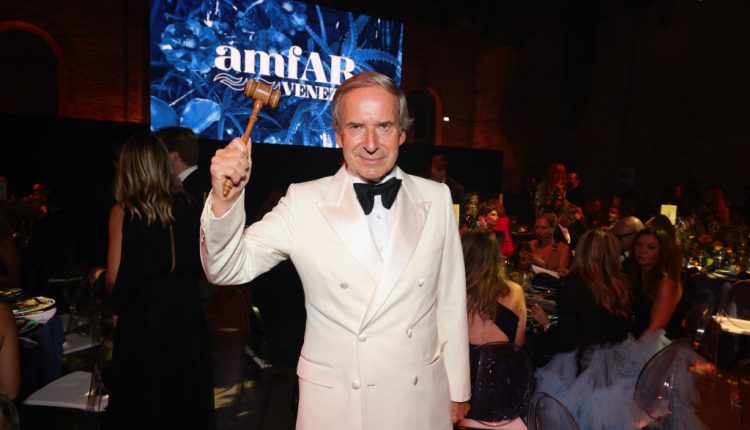 Every month in The Hammer, art-industry veteran Simon de Pury lifts the curtain on his life as the ultimate art-world insider, his brushes with celebrity, and his invaluable insight into the inner workings of the art market.

Frieze’s decision to start Frieze Seoul was a master stroke. With the uncertainty as to what Hong Kong will be like when one will be able to travel there again without risking forced quarantine, Frieze has put a marker down for potentially overtaking Art Basel as the most important art fair in Asia.

I was very disappointed at being unable to attend the first Frieze in Seoul—all the more so because even though I am a relentless global traveler, I have never been to Seoul. I was not able to make it as I had committed a long time ago to conducting the annual benefit auction at the Fondation Beyeler in Basel, and the amfAR auction during the Film Festival in Venice. By most accounts, the fair was a resounding success.

Over the last few years South Korea has had a major impact on global youth culture primarily as a result of K-Pop that has conquered the world. When the brilliant movie Parasite by Bong Joon-ho became the first non-English language film to win the Academy Award for best movie in 2020, it was a sensation. More recently, without any advance publicity but through word of mouth, Squid Game became the most successful series ever on Netflix. All this coincides with the towering importance of the late artist Nam June Paik being finally recognized in view of all the technological breakthroughs that have taken place in digital art since. Artists such as Lee Ufan, Do Ho Suh, Lee Bull, Haegue Yang and Minjung Kim have made Korean contemporary art hugely relevant. The cultural activities of the Samsung Foundation have also contributed to South Korea’s preeminent place in the contemporary art world. South Korea is not the first country to have an outsize impact on global culture. In the same way that youth was most influenced by American popular culture from the ‘50s to the ‘70s, it was Japanese manga, toys, video games, and movies that shaped the earliest cultural experiences of teens and pre teens around the globe from the ‘80s until well into the early 21st century. Artists like Yayoi Kusama, Takashi Murakami, or Yoshitomo Nara helped make Tokyo into a significant art hub.

In the early 1950s, New York became the undisputed center in all four categories. This has lasted for a very long time, and in terms of the marketplace it still is the case today. It is not a coincidence that as soon as an artwork is expected to sell at auction for a price in excess of $50 million New York is the place chosen by the vendors regardless of where they themselves are based. In the years prior to World War II, Paris was the place where artists of the caliber of Picasso, Matisse, Modigliani, Dalí, Braque, Van Dongen, and many more were active and creating a stimulating climate of healthy emulation. With the advent of Abstract Expressionism and subsequently Pop Art and Minimalism, New York became the place where artists such as Warhol, Lichtenstein, Basquiat or Haring and many more were living and working.

After the reunification of the two Germanys, Berlin became during the 1990s and the 2000s a vibrant center for artists that came from all over the world, attracted by its cheap real estate and the special vibe that developed as a result.

The center of gravity then moved to Los Angeles. The light, the climate, the accessible large studio spaces became a magnet for artists who succumbed to the lure of California. Up to a degree L.A. still is that place. I haven’t done the exercise of going through the contemporary art catalogues of Sotheby’s, Christie’s, and Phillips but my bet is that still today the majority of the artists being sold in them are based in Los Angeles.

After the technological revolution born with the internet, the actual location of where you are based as an artist should matter far less. There is no longer such a thing as there was during the Cold War when artists on either side of the iron curtain had little or no clue about what was being done on the other side. Internationally successful artists can live in smaller cities—like Wim Delvoye who has his main studio in Ghent—or completely in the countryside—like Albert Oehlen whose principal studio is in the middle of  cows in the Swiss canton of Appenzell. Today, there are constantly new art centers developing. With the rise of African contemporary art, cities like Ghana’s capital Accra have gained in importance with the presence of a number of artists gaining traction in the market and some important galleries promoting their work even if the superstar born in Accra, Amoako Boafo now lives in Vienna. In 1988 during Glasnost, I initiated and conducted Sotheby’s first big international auction in Moscow. My hope of it becoming an important art market center was at its zenith twenty years later in 2008, when the Garage Museum founded by Dasha Zukhova opened, when Winzavod became a vibrant center for contemporary art galleries, and Gagosian staged large exhibitions at the chocolate factory. This was to be short lived as subsequently one local contemporary art gallery after the other closed again since, as was the case during the communist years of the Soviet Union, there was—to put it mildly—little official support for contemporary art.

The biggest cultural projects of this century so far have been in the Middle East. The series of museums that have and will open in Qatar, Abu Dhabi, and possibly the most ambitious cultural initiatives of them all in Saudi Arabia (namely in AlUla) will make these places a must for art lovers for generations to come in the same way that cities like Rome, Paris, Florence, Saint Petersburg or Venice still benefit from the times when they were the unrivaled cultural centers.

Venice is an interesting case. The Biennale makes it the capital of the contemporary art world at least during its opening month every two years. With the exhibition program of François Pinault both at the Palazzo Grassi and at the Punto della Dogana, and the more recent arrival of foundations set up by Anish Kapoor and collectors such as Nicolas Berggruen and others it has become a year-round center for contemporary art.

No matter how successful an individual is, it is only art and culture that will give him or her the ultimate aura and create a lasting legacy. The same applies to cities. A place may be important for business or political reasons but unless it offers something culturally relevant it will not have a lasting impact.

Whether it is for people or cities, cultural investments also bring huge economic rewards. When in the early ‘80s I was organizing major exhibitions as Baron Thyssen’s curator in Lugano, Switzerland, even the local salami vendor was taking full page advertisements in the local newspaper to thank the Baron as he was selling so much more salami.

The Leaning Tower of… Paris? Jean Nouvel’s Teetering Skyscraper Makes Its Discombobulating Debut on the Seine