See Inside Shantell Martin’s New Studio, Where the Artist Has Drawn All Over the Walls 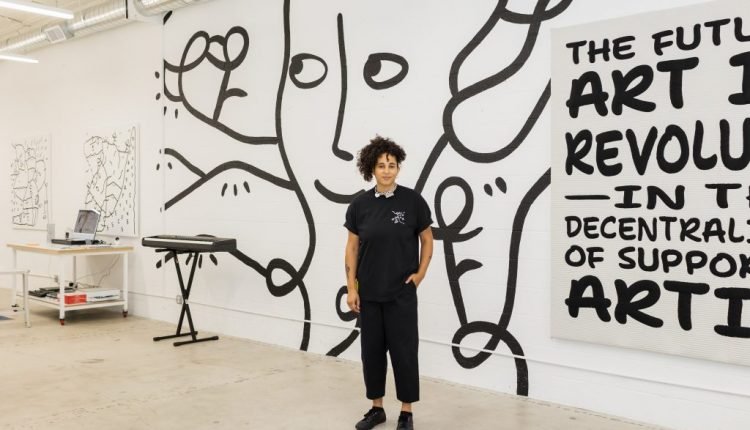 Using a simple marker (typically black) on a canvas (typically white), multimedia artist and self-described philosopher Shantell Martin explores the creative potential of hand-drawn lines, both to meditate on the intersectionality of identity—including her own as a mixed-race British woman living a bicoastal American life—and to help connect people across perceived differences. Her lines swirl and cross and sometimes form faces, while asking questions like “WHO ARE YOU” and “ARE YOU YOU.” They go on and on across her canvas, which can be anything from sheets of paper to water bottles to entire walls.

“The future that I imagine is expansive and infinite,” the artist said in a statement. It includes, she continued, “a myriad of voices representing contrasting points of view.”

Martin’s works have been exhibited everywhere from the Denver Art Museum to the Oculus at the World Trade Center in New York, and she has collaborated with everyone from Kendrick Lamar to Kelly Wearstler to her late grandmother Dot (who embroidered Martin’s ‘Half White’ series in a colorful reflection on multiracial identity), not to mention brands such as Amex, Google Photos, and, most recently, Hoek Home. All of her work is marked by a sense of spontaneity and play; she even draws live before audiences. “There is nothing that is planned ahead of time,” she said. “I literally go with the flow on the journey where the ink pen takes me.”

It has taken Martin from her birthplace of London to her current bases of New York and Los Angeles, where she has taken over a former Zumba studio turned Tinkercad camp in Culver City. “Kids were making things in there, people were dancing—overall there was a lot of positive energy when I moved in,” she said.

Now, there is even more: the artist has literally drawn all over the walls. And the space is as multifaceted as her work. “When I’m there, I’m sometimes drawing, sometimes archiving, sometimes organizing, sometimes meeting people, hosting events, having jam sessions with friends,” said Martin.

She invited Artnet News inside for a tour. What is the first thing you do when you walk into your studio (after turning on the lights)?

I start by turning off the alarm, probably throwing my keys and bag down somewhere. I’ll make myself comfortable—maybe go to the fridge and get myself a beverage, put on a good playlist, light my Joya Candle for focus. Then, I sit down with a list of things I want to do.

What is a studio task on your agenda this week that you are most looking forward to?

This week I’m actually out of the studio, on the road for the Blink art festival in Cincinnati and then to present an award at the Golden Vines ceremony in Florence, Italy. Before I leave, I typically make sure everything is clean and in order, and that all to-dos are waiting for me upon my return. What are you working on right now?

I’m currently working on a mural design to be displayed at Blink, and sketching out different ideas.

What kind of atmosphere do you prefer when you work? Is there anything you like to listen to or look at while in the studio for inspiration or as ambient culture?

I usually put on playlist called Spinechecker Jams, which my chiropractor curates! That is the playlist that I listen to most these days. Sometimes I put on German Top 50, because I’m learning German right now.

What tool or art supply do you enjoy working with the most, and why?

Simple ink markers. They are accessible and fun. I’ve been using them for a long time; you have to get good at using them, or else all your mistakes will show. I feel that as long as you put good intentions behind what you are working on, it will be good.

When you feel stuck while preparing for a show, what do you do to get unstuck?

If I feel stuck, I move myself physically, or I start drawing and move through it. You have to move—your body, the pen, yourself.

What images or objects do you look at while you work? Describe the space in three adjectives.

What is the fanciest thing in your studio?

Plants—nice, big plants. I think they are fancy. No idea what type they are; I went to a local plant shop and let them guide me.

Is there anything in your studio that a visitor might find surprising?

I have a super-colorful painting of Shyama Golden‘s work up; I’m a massive fan of her work. It’s playful and it makes me feel good. Shyama Golden, Rider and Ridee II (2019). Courtesy of the artist.

How does the studio environment influence the way you work?

I think it just gives me space. I like having a couch so I can take breaks, and a keyboard to play music between meetings. For me to work and think well, I need to jump between things. There is enough variation to keep me occupied and engaged.

What’s the last thing you do before you leave the studio at the end of the day (besides turning off the lights)?

I like to make sure everything is in its place. Sometimes I sweep. It’s a good way of meditating—clearing my mind while clearing the space.