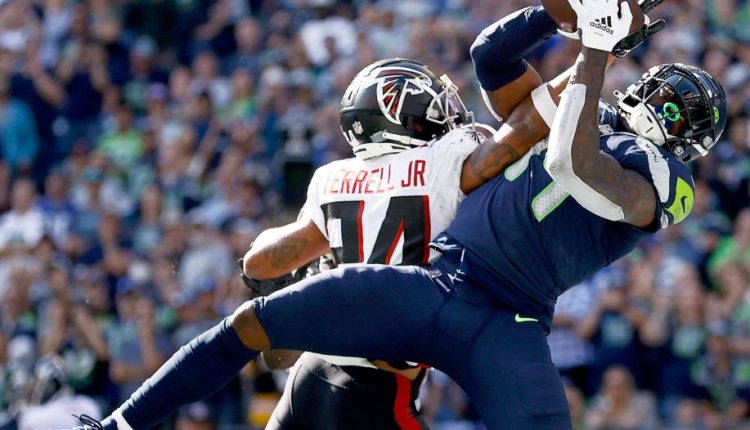 When Russell Wilson was dealt from the Seattle Seahawks to the Denver Broncos this past offseason, the presumption was that he was heading for greener pastures. Wilson would finally be free from coach Pete Carroll, whom he reportedly blamed for holding back his 2019 MVP campaign, while Denver wideouts Courtland Sutton, Jerry Jeudy and Tim Patrick were going to seamlessly replace the group of targets Wilson was leaving behind in Seattle.

Instead, Wilson’s struggles in Denver — and Geno Smith’s ensuing success with the Seahawks — crystalized a factor that was perhaps underrated during Wilson’s decadelong stint in Seattle: the excellent wide receiver play that he enjoyed over the years.

The evidence for this is beyond circumstantial: New Receiver Tracking Metrics (RTMs) from ESPN Analytics indicate that the Seahawks have perennially been one of the NFL’s top receiving teams with Tyler Lockett and DK Metcalf in recent seasons (and with Doug Baldwin prior to Metcalf’s arrival). They also reveal that, although Wilson’s new Broncos receivers have been able to consistently get open, they have failed to convert those chances into receptions at a high rate relative to what we would expect.

But let’s back up and explain our new RTMs. The idea of the metrics is to quantify, using player tracking data from NFL Next Gen Stats, the individual attributes that make up receiver play: the ability to get open, to make the catch and to generate yards after the catch. In these three component metrics — which we’re calling Open Score, Catch Score and YAC Score – players are evaluated on a play-by-play level, based on their performance relative to expectations after adjusting for the particulars of the play itself.

Open Score tracks a receiver’s ability to separate from defenders and give himself a high probability of creating a reception,1 relative to expectations based on factors that include the type and depth of route run, the defense’s coverage and the positioning of the receiver and relevant defenders. Catch Score assesses a receiver’s ability to make a catch in a similar manner to Open Score, but also factors in the quarterback and the accuracy of the throw in question. Finally, YAC Score evaluates a player’s ability to create yards after the catch relative to expectations set at the time of reception, based on the locations of players on the field.

Additionally, we have an Overall Score for receivers, which summarizes the three components by weighting them according to how well they correlate with yards per route.2 Based on this, Open Score makes up roughly half the Overall Score, with Catch Score and YAC Score each coming in slightly above and below a quarter, respectively. This intuitively makes sense, because Catch Score is somewhat reliant on Open Score – a player earns targets in part by getting open — and YAC Score is somewhat reliant on Catch Score (no YAC can be generated without a reception).

All four metrics are on a 0-99 scale, with 50 being roughly average. Wide receivers and tight ends are grouped together; running backs also have RTMs but are on their own scale. A full explainer by the metrics’ creator, ESPN sports data scientist Brian Burke, can be found here. But the really exciting news is that a full interactive with both current and historical (back to 2017) RTM outputs is available publicly here — and will update weekly — at FiveThirtyEight.

It was while looking at these same numbers from the interactive that my eye was drawn to the Seahawks’ and Broncos’ wide receivers.

Lockett, even after an uncharacteristic drop in Sunday’s win over the Giants, is elite this season in two of our three RTM attributes: Open Score (90) and Catch Score (81). And his Overall Score is 78 — fifth-best in the league — despite having the worst YAC Score (22) of any WR or TE.

Meanwhile, Jeudy, Denver’s top receiver in Overall Score (49) this season, frequently gets open (67) but converts that openness into receptions poorly: his Catch Score is just a 27. Sutton’s numbers are similar, and his Catch Score of 26 is second-worst among all qualifiers, only ahead of Rams tight end Tyler Higbee. Patrick, who led all Broncos receivers in Overall Score (64) in 2021, suffered a torn ACL ahead of the season. So by the RTMs, Wilson suffered a big drop-off in supporting cast at receiver when he left the Seahawks for the Broncos.

Further underscoring this, there is a team version of the RTMs (not shown in the interactive) that summarizes all wide receivers and tight ends by team in each category. Here are Seattle’s Overall Score ranks for every season from 2017 through 2022:

Clearly, Wilson’s loss has been Smith’s gain. And for contrast: The Broncos rank 29th this year. But what does this all look like on the field?

Well, for an example of a play that contributes to a strong Open Score, take a look at this touchdown from 2021 as visualized via Next Gen Stats tracking animations:

Lockett (No. 16) fakes a corner route to shake both Titans cornerback Elijah Molden (24) and safety Bradley McDougald (30) before breaking into a deep over. Molden is in man coverage against him – which is important, because man plays are weighted more heavily by Open Score. Lockett is open both shortly before Wilson throws the ball and at the time of the ball’s arrival. In other words: This is exactly how a receiver achieves high marks for Open Score. Lockett uncharacteristically scores via YAC on this play as well, but the main highlight in this case was his ability to get open. (Note that this is an example of a targeted open play, but it’s important to reiterate that Open Score is based on a player’s ability to get open on all routes, targeted or untargeted.)

Now let’s look at another example play (this time from 2022), in which Lockett adds to his great Catch Score:

Lockett is running a deep post against the Saints with Smith at quarterback for the Seahawks. It’s a hard enough play as is, but Lockett is drawing extra attention from defenders: Corner Paulson Adebo (29) and safety J.T. Gray (48) are both in the vicinity of the ball at the time it arrives. Lockett makes the catch anyway, turning a play that was not certain to be a reception into a touchdown. (It’s also worth noting that the throw is on the money, so Lockett doesn’t get any extra credit for making a catch on an off-target throw, which is another aspect of Catch Score.)

And lastly, what about when things go awry? Here’s an extreme example from Sutton this season:

In it, Sutton (No. 14) is running a well-executed little slant over the middle that gets Jaguars corner Tyson Campbell (32) picked, leaving Sutton wide open … but he drops the ball. In this case, there are three elements all working against his Catch Score:

Perhaps Denver’s wideouts will improve their RTMs as the season goes on, and help Wilson’s passing numbers in the process. But for now, we can see the disparity between the two receiving corps as a driving factor behind Wilson’s drop-off, as well as Smith’s success. And you can use our interactive dashboard to track the performances of your favorite receivers throughout the rest of the season.