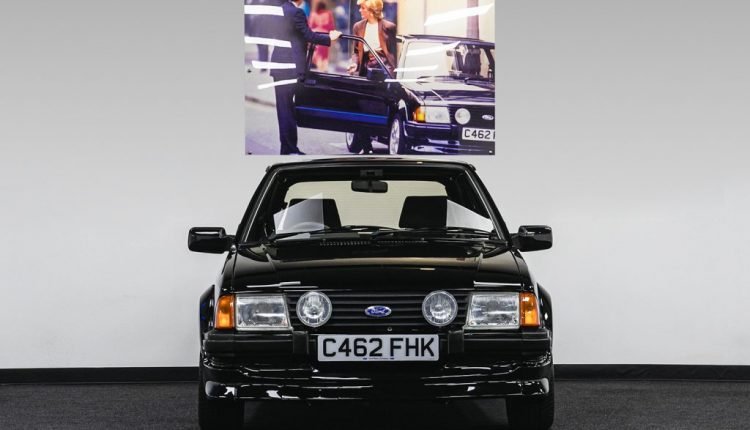 One lucky (and still-anonymous) British buyer can now traverse the land in a 1985 Ford Escort RS Turbo S1 that once belonged to Diana, Princess of Wales, courtesy of Silverstone Auctions—and a hefty £722,500 price tag (nearly $823,000.)

Held a few weeks ago—before her mother-in-law’s passing consumed the news—the auction drew on nostalgia for the People’s Princess. In London, ads on the street featured a young Prince William smiling from the backseat of the vehicle.

Silverstone Auctions, which specializes in cars, returned to Silverstone Circuit for their twelfth annual Classic Sale. Held at the end of August, the event was pegged to the world’s largest classic motor racing festival, the Silverstone Classic. Diana’s economical ride was a star of the two-day sale’s 130 lots, which ranged from a 1962 Lotus Seven S2 to a 2000 Subaru Impreza P1. An exterior angle of The People’s Princess’s vehicle.

Classic car specialist Arwel Richards of Silverstone Auctions told Artnet News he’s been acquainted with this particular car for over a decade. The previous owner “has enjoyed a very good relationship with our company, buying and selling many cars over the years,” he wrote.

Silverstone Auctions offered Lady Diana’s car with no reserve. Given its provenance and rarity—among other things, it’s the only black iteration of an otherwise all-white model—Richards expected the ride would fetch £200,000. In the event, a bidding war drove the price to more than double that estimate. “That’s the joy of an auction!” he said.

The car was returned to the Ford Motor Company in May 1988, following Diana’s untimely death, with 6,800 miles on the odometer. Geoff King, manager of Ford’s Government Sales department, then bought it for his wife. In September 1993, Kiss FM got their hands on it for a promotional giveaway, and it was won by one “Miss Jones,” of Essex, who received it with 12,000 miles. The car’s most recent seller acquired it from “the appropriately named Mr. Windsor,” who’d had it since November 1, 1994, Silverstone’s description says.

A modern woman and “city girl at heart,” Diana still refused the status quo by choosing another accessible, U.S.-made sportscar instead—albeit one equipped with a secondary rearview mirror for her security detail.

“It remains the most daring choice of class-dividing motor car by any member of the Royal Family since,” Silverstone Auctions explained in its press materials for the sale.

‘One Piece’ Is the World’s Most Popular Manga. Now an Artist Has Transformed It Into an Epic Book That’s Impossible to Read