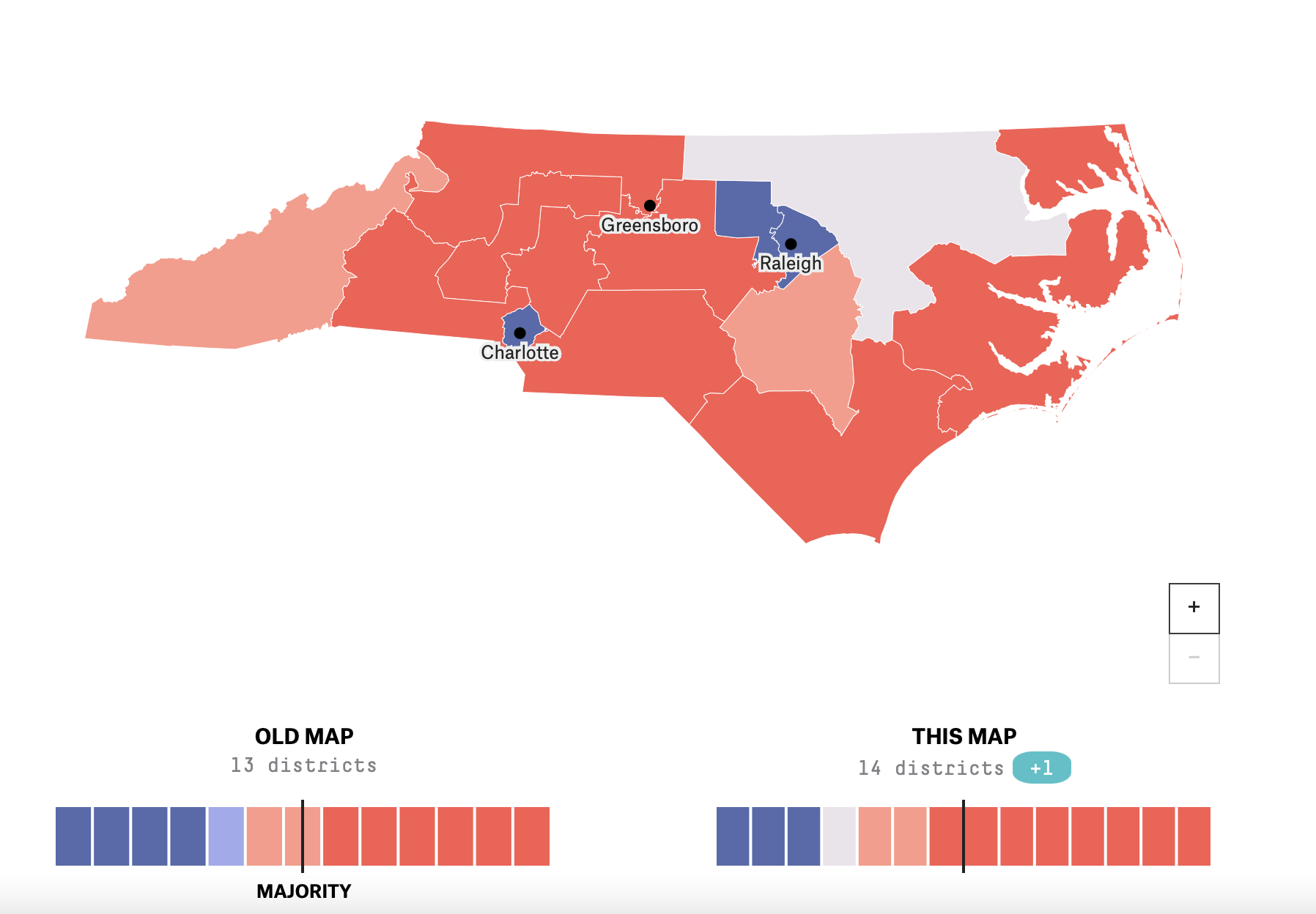 After considering at least 11 proposals, the North Carolina General Assembly finally passed a new congressional map on Nov. 4 — and it’s one of the most Republican-biased maps they could have chosen. But this likely isn’t the end of the redistricting saga in the Tar Heel State.

Redistricting is usually a once-a-decade process, but in North Carolina, courts have repeatedly ordered the drawing of new congressional maps due to extreme gerrymandering. And given that both racial and partisan gerrymandering lawsuits have already been filed against this new map, it remains to be seen whether it will survive either.

North Carolina’s previous congressional map — which is to say, the one used in last year’s election — already gave Republicans eight seats and Democrats five seats in a state President Biden lost by just 1 percentage point, but the new map gives the GOP an even greater advantage. According to our analysis, it creates 10 Republican seats, three Democratic seats and one highly competitive seat.

The approved map has an efficiency gap of R+20.1, up 11.6 points from the old map, which had an efficiency gap of R+8.5. (Efficiency gap is a measure of which party has more “wasted” votes, i.e., votes that don’t contribute toward a candidate winning. This means that the new map is more than twice as efficient for Republicans as the old map, which was already pretty efficient for them.) Under the new map, North Carolina’s median congressional district is also now 11.4 points redder than the state as a whole. In other words, Democrats would have to win North Carolina by 11.4 points just to win half its congressional seats.

The new map boosts Republicans in the state through reapportionment, both by giving the state a 14th district, which the Republican-majority General Assembly used to give their party a double-digit advantage, and by making two currently Democratic-held seats much less blue. One of those seats is the 6th District, which previously encompassed all of Guilford County and part of Forsyth County. The new map splits the old 6th into four districts, which contradicts House Redistricting Committee Chair Destin Hall’s claim that the committee “focused only on traditional criteria like keeping counties and cities whole” when drawing maps. This change will surely make for an improbable reelection for Democratic Rep. Kathy Manning. In the new map, Manning represents the new 11th District, which leans Republican by 16 points.

This isn’t the first time North Carolina has drawn maps that favor one group over others. During the 2010s, the state had two maps thrown out in court due to racial and partisan gerrymandering. Following the initial map in 2011, the courts ruled in 2016 that the state’s map had been racially gerrymandered to disadvantage Black voters in the state, a decision that was upheld by the Supreme Court. Then, in 2019, a state court panel threw out North Carolina’s 2016 map because it was ruled a partisan gerrymander that gave Republicans an advantage.

This time around, likely in an attempt to insulate themselves from more gerrymandering lawsuits, legislative map-drawers announced their redistricting criteria in advance, which included adhering to the 2019 court’s decree that they not use partisan or racial data when crafting the new maps. But as we’ve seen, the 2021 congressional map gives Republicans an even greater advantage than before. And by omitting racial data, lawmakers may be running afoul of the Voting Rights Act, which requires states to draw heavily nonwhite districts in areas where there is racially polarized voting so that those communities have a voice in Congress.

Specifically, the new map could imperil the ability of Black residents in the new 2nd District (Butterfield’s district) to elect the representative of their choice. The new district has a voting-age population that is just 38 percent Black — down from 41 percent under the old map. It’s also 51 percent white, which is up from 48 percent. While this may appear to be a small difference, it’s enough to change the district from one that would likely elect a Democrat to one that could easily elect a Republican instead.

Legal challenges to the state’s new map have already begun. Considering the partisan skew of the map and its possible Voting Rights Act violations, the 2021 map could join last decade’s maps and get thrown out by the courts.

Even before the map was approved, the North Carolina NAACP, Common Cause and state residents filed a lawsuit arguing that the new map disenfranchises voters of color precisely because lawmakers decided not to consider racial data when drawing it. The lawsuit argues that the legislature must consider racial data to ensure that voters of color can elect their candidate of choice. For their part, Republican lawmakers say there is a precedent for not using racial data: The 2019 map was approved without using it.

The map also faces a lawsuit on the grounds that it is a partisan gerrymander. The suit’s plaintiffs, who have regularly voted for Democrats, argue that the new map packs Democrats into districts like the Charlotte-area 9th District (to waste as many Democratic votes as possible) and cracks other Democratic strongholds like the Piedmont Triad (Manning’s current district) to minimize their voting power. Although the Supreme Court has ruled (in a case concerning North Carolina) that partisan gerrymandering is a political question outside the purview of federal courts, this lawsuit will be decided by state courts, many of which have not been shy about striking down maps for reasons of partisan gerrymandering — including in North Carolina in 2019. And since Democrats currently hold a 4-3 majority on the North Carolina Supreme Court, this lawsuit may find a receptive audience.

How Are Kids Handling The Pandemic? We Asked Them.

Redistricting Has Maintained The Status Quo So Far. That’s Good For Republicans.

What Americans Really Think About Abortion