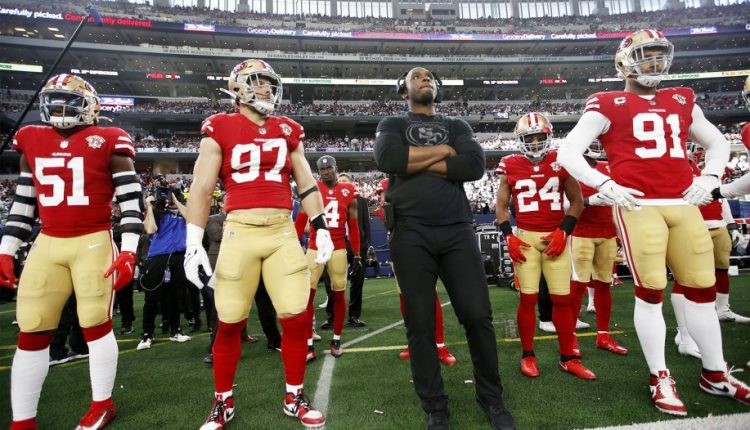 It’s almost November, and NFL offenses still can’t find the end zone. That may not sound terribly surprising to anyone who’s watched the Denver Broncos play three ugly, nationally televised games in the season’s first six weeks, but the league’s offensive woes go far beyond Russell Wilson and Nathaniel Hackett. Teams are collectively averaging fewer than 22 points per game through six weeks, a trend that — if it holds — would make 2022 the NFL’s lowest-scoring season since before Apple released the iPad and Lady Gaga wore her meat dress to the MTV Video Music Awards.

There is no shortage of theories as to why scoring is down, but one of the more prominent ideas has to do with the NFL’s continual shift toward “two-high” safety defenses, which are designed to stop the pass. As the name implies, two-high defenses keep two defensive backs downfield to protect against deeper throws. This contrasts with the “single-high” safety defense popularized by the Seattle Seahawks’ Legion of Boom in the early 2010s. Strong safety Kam Chancellor and the rest of the Hawks secondary played a scheme that was designed to help defend against the run by dropping an extra defender down into the “box” near the line of scrimmage, clogging up gaps and running lanes.

Two-high defenses take the opposite approach, with defenders playing zone to take away the intermediate and deep passing game while trying to force the opposing offense to throw short passes and march methodically down the field. Since passing is more efficient than running the ball, two-high coverages are making it harder to pass the football, thus dragging down scoring leaguewide.

Or at least, that’s the theory.

As explanations go, it’s not a bad one. There’s some decent evidence to support the two-high hypothesis: Defenses have been playing more and more two-high snaps in recent seasons, and the trend is holding even on early downs, when teams typically put a strong emphasis on stopping the run.

So far in 2022, the rate of two-high safety coverage deployed on first and second down is 34.2 percent — up 9.1 percentage points from 2016.1 Meanwhile, single-high coverages have fallen out of fashion slightly, dropping from 56.2 percent on early downs in 2016 to 52.7 percent this year.

If two-high is effective, we should expect offenses to have to adapt, and that appears to be happening. NFL quarterbacks have responded to the shift in defensive strategy not by throwing the ball less overall (passing attempts per game are roughly the same as years past), but by throwing the ball downfield less. After hovering around an average depth of target of 8.5 yards from 2006-14, quarterbacks across the league have begun to take the checkdown more often. The number of designed short plays, like screens and quick outs, has held relatively steady, but so far this year, the average pass attempt traveled nearly a yard less through the air (7.7) than the 2006-14 average.2

Still, a lower average depth of target in response to two-high looks isn’t ironclad evidence for the coverage scheme’s effectiveness. After all, the average pass in terms of air yards has been dropping since 2016, and 2020 was the highest-scoring season in NFL history. Instead, a better piece of evidence is that passing against two-high coverage has had a negative expected value this year. An attempt against that coverage is worth negative 0.005 EPA per play so far this season, down from positive 0.05 EPA per play across 2016-21.

On its face, that seems like a significant drop. But is a six-game sample enough to say for sure?

To find out how this season compares to the previous six seasons, I randomly chose six weeks3 of plays against two-high coverages and did some bootstrapping to calculate the EPA per play. I like to imagine this as though we put six weeks’ worth of plays in a hat: After we reach in the hat and take a handful of plays from those six weeks and calculate the average EPA per play, we throw the plays back in the hat when we’re done.

I did this (well, let’s be honest, the computer did) 500 times4 with the hat full of plays from those six weeks — enough to give us a solid idea about the range of outcomes for EPA per play for that six-game period. Then I selected another six weeks at random and repeated the procedure, taking a handful of plays 500 times from that new six-week sample in the hat and figuring out the average EPA per play for each handful. All told, we calculated EPA per play 500 times in each of 50 different six-week groupings for the last six seasons (2016-21), giving us 150,000 educated guesses about what the average EPA per play could end up being in any six-game period.

Based on the results, 2022 isn’t particularly special. It turns out that while -0.005 EPA per play against two-high coverage is lower than what we might expect, it’s not extraordinarily low. Most years, we really shouldn’t be too surprised to see a six-game stretch in which offenses do about this poorly against defenses with two deep safeties.

This result makes sense to my nerd brain in particular. Every year, weird statistical anomalies happen in relatively small samples — but they don’t necessarily mean anything, even if you can construct a compelling narrative around them.

And this year’s narrative of choice isn’t without some weaknesses anyway, as two-high coverages certainly aren’t preventing the league’s top quarterbacks from putting points on the board. Through six games of the season, the top offenses in the NFL by EPA per play are exactly what you might expect: The Kansas City Chiefs, Buffalo Bills, Philadelphia Eagles and Baltimore Ravens. Josh Allen and Patrick Mahomes are tied for the league lead in passing touchdowns at 17, and Lamar Jackson is third with 13 TD tosses — and all three are above league average this season in terms of number of dropbacks against two-high coverage.

Humans tend to focus a lot of attention on endpoints, and we love finding patterns (even when they might not exist). The first few games of the NFL season are a perfect laboratory for both of these quirks to thrive. This isn’t to say that there’s no merit to the idea that passing has been negatively impacted by two-high coverages. Both things can be true: It’s possible that defenses have suddenly figured out the key to throttling passing — but it’s also possible that people are just out here talking mad splits.