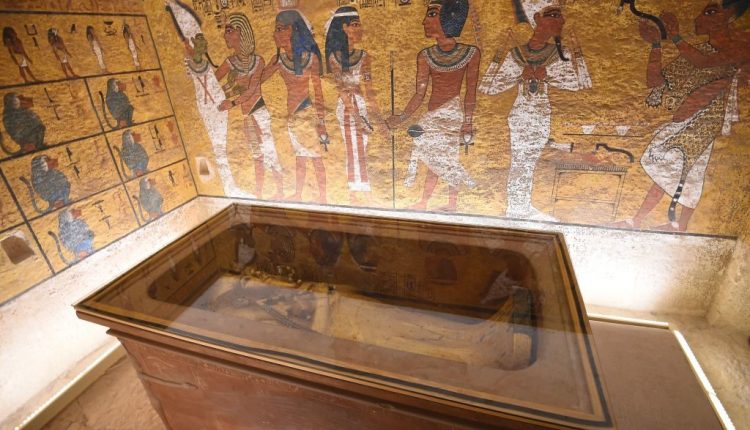 One of the world’s foremost Egyptologists says that recent hieroglyphics discoveries in King Tut’s tomb give further credence to a theory he put forth more than seven years ago: that Queen Nefertiti’s body is inside a hidden chamber next to that of her stepson, King Tutankhamun.

Nicholas Reeves, an Egyptologist and former curator at the British Museum, realized that cartouches—carved oval or oblong tablets that enclose a group of Egyptian hieroglyphs—showing Tutankhamun being buried by Ay, his successor, had been painted over other cartouches that showed Tutankhamen burying Nefertiti, according to the Guardian.

His conclusion also suggests “absolute confirmation in the figures’ facial profiles—the snub nose and chubby under-chin of the [figure] currently labelled as Ay follow … precisely the standardized facial outline adopted for official representations of Tutankhamun at the very start of his kingship. The face of the mummy carries the indisputable features of Nefertiti. Demonstrably, the scene had begun its life as a record of Tutankhamun officiating at the burial of his predecessor.”

According to an earlier report in Factum Foundation, Reeves has identified what seem to be the traces of two sealed doors, which he believes will lead to the undiscovered tomb of Nefertiti.

One of the issues is that experts can’t just break through the highly decorated and painted walls so they have relied instead on cutting edge-scanning techniques to gain insight.

In 2015, Egypt’s Supreme Council of Antiquities gave Reeves permission to do on-site 3D resonances, which support his theories.

Reeves argued at that time that the high-resolution images of Tutankhamun’s tomb showed lines underneath plastered surfaces of painted walls, suggesting unexplored doorways. However, some other experts felt that the scans were inconclusive, according to The Guardian.

Reeves now says that newer evidence supports the theory that Tutankhamun’s tomb is just on the outer section of the much larger tomb, “prepared for and still occupied by” Nefertiti.

Reeves will include the new evidence in a forthcoming book, The Complete Tutankhamun, which will be published by Thames and Hudson In October. The book updates an earlier edition he published 30 years ago.

In a 2015 on-site interview with CBS after he first publicized his theory, Reeves told a reporter, “If I’m wrong I’m wrong… we move on, but I think it’s something that we can’t just ignore because if I happen to be right, it will change everything.”

A New York Artist Claims to Have Set a Precedent by Copyrighting Their A.I.-Assisted Comic Book. But the Law May Not Agree