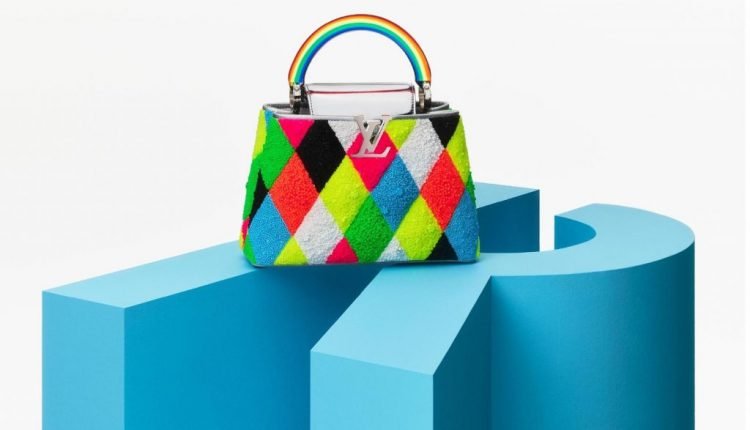 A roster that includes the likes of Amélie Bertrand, Daniel Buren, Park Seo-Bo, Peter Marino, Ugo Rondinone, and Kennedy Yanko sounds like the makings of a hit group exhibition. Instead, it’s the assemblage of creative collaborators drafted by Louis Vuitton for the French maison’s latest iteration of its Artycapcucines. Their mission: to completely reimagine one of the iconic Capucine handbags in their visual language.

This is the fourth “group show” of art-led handbags since the Artycapucine initiative began in 2019 (the bag is named after Paris’s rue Neuve-de-Capucines, where the namesake founder opened his first store in 1854). The limited-edition collaborations went on sale online and in boutiques this week. Only 200 of each design have been made, and each retails for $10,500.

The Artycapucines are also the subject of a retrospective of sorts, currently on view through the weekend at Louis Vuitton’s Paris+ par Art Basel booth, that showcases the current crop and their forebears. It’s a good contemporary art quiz to see if you can guess who made what in the multi-hued grid. This season’s participants have put their own highly legible stamps on the iconic shape. Peter Marino, who has served as sort of an architect-in-residence for the luxury house, helming their store designs for over 20 years, stayed true to his personal brand. He delivered a studded black leather biker take on the handbag.

The Korean painter Park Seo-Bo took a textural, meditative viewpoint on his bag, and loves the idea of seeing it out in the world. “Art should not be regarded as precious treasure,” he said.  “It should exist in the public domain, in everyday life.”

On the more colorful side of the spectrum was Ugo Rondinone, who topped a pattern of neon, harlequin-like beaded diamonds with a handle mimicking one of his signature rainbows. Amélie Bertrand’s glow-in-the-dark, gradient rendition of an electric, 1980s-flavored sunset. “I wanted a bag that illuminated the night, like a nightclubbing bag,” said the Cannes native.

The French conceptualist Daniel Buren went all-out (jambon, shall we say?) and did four different color iterations paired with his synonymous stripes in black and white. “Just three weeks after showing them my thumbnail sketch, they presented me with a prototype,” he said.

Daniel Buren and Amélie Bertrand had very different graphic takes on the Artycapucines, but both conjured a 1980s vibe. Courtesy of Louis Vuitton.

Kennedy Yanko is deservedly the sculptor of the moment. Her striking bag references her metalwork technique, and the result is abstract, deconstructed, gorgeous, and a bit dystopian. “They were super-experimental about recreating my paint-skin effect,” she said. “It actually incorporates a rusting process that takes place using bacteria. They also experimented with over 20 different color samples, using a spectrometer to get the exact shade. It was an intensive process, which I enjoyed a lot. It gave me new ideas of how I could sculpturally add volume and texture to my own work using different materials.”

Louis Vuitton’s other big art project of the month is the “200 Trunks, 200 Visionaries: The Exhibition,” for which a slew of big-name artists developed their own Louis Vuitton trunks. The roving show, which previously appeared in Los Angeles, has taken over the entirety of the former Barneys New York building—including its chic top-floor eatery, which has been christened FREDS x LOUIS for the occasion. As Competition Ramps Up in the Primary Market, Midsized Galleries Promoted Their Close Ties to Artists at Paris+