London’s Newest Fourth Plinth Sculpture Is a Tribute to an Anti-Colonial Hero. Politicians Want to Replace It With a Statue of Queen Elizabeth II 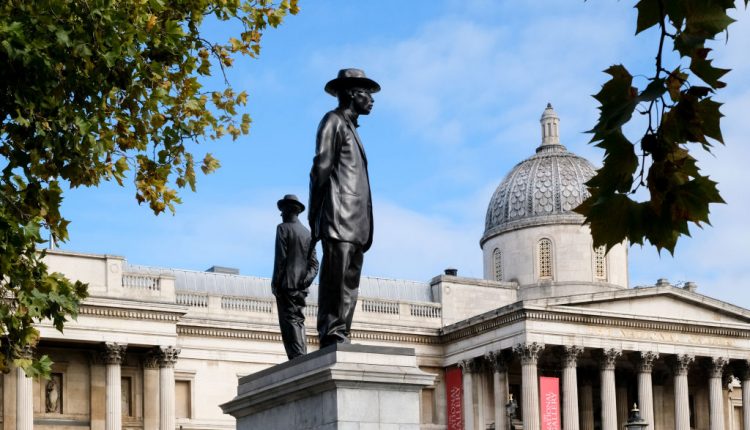 This week, the newest commission in the prestigious Fourth Plinth sculpture series, a monument to the pan-African Baptist pastor and anti-colonialist icon John Chilembwe, was unveiled in London’s Trafalgar Square. But just as the bronze artwork went up, a debate began raging about whether or not its plinth should instead be used to display a memorial to the late Queen Elizabeth II—a move that could end one of the U.K.’s most prominent platforms for contemporary art.

Samson Kambalu is the artist behind the 16-foot-tall sculpture, titled Antelope. It reimagines a 1914 photograph of Chilembwe taken the day he opened his new church in Nyasaland (present-day Malawi). Standing next to European missionary John Chorley, Chilembwe sports a wide-brimmed hat, openly violating a colonial rule that prohibited Africans from donning headwear in front of white people.

Furthering the metaphor, Kambalu depicts Chilembwe as nearly double the size of Chorley. “By increasing his scale, the artist elevates Chilembwe and his story, revealing the hidden narratives of underrepresented peoples in the history of the British Empire in Africa, and beyond,” an announcement from the mayor of London’s office said.

Less than a year after the photo was taken, the pastor was murdered by colonists during an uprising he helped foment against the British. His church was burned to the ground.

“I think Chilembwe’s gift to the world has been delivered,” Kambalu, who was born in Malawi and now lives and works in Oxford, said of his subject at the artwork’s unveiling this week.

“There’s been so much talk of pulling monuments down. Today, we’re putting a new one up,” added Justine Simons, London’s deputy mayor for culture and the creative industries. “I hope this artwork will encourage us all to consider what colonialism means for the Britain of today.” The presentation of Kambalu’s monument was set to take place on September 14, but the event was postponed because of the queen’s death. The days that followed the funeral brought a broader conversation about the future of the Fourth Plinth, which some in power had long assumed would be used for a memorial to the monarch after her death.

That Kambalu’s creation sits at the center of this debate has more to do with timing than the sculpture itself, though the urgency of Antelope’s message reflects the queen’s own failure to publicly contend with the legacy of Britain’s colonial past.
“The crown jewels, they’re mostly made up of stones that have been stolen from various places in the British Empire,” Priya Satia, a Stanford University history professor who specializes in the British empire, told TIME. “The queen always wore them, never suggesting in any way that they be returned. There hasn’t been a moment in which the monarchy turned its back against empire and said, ‘No more,’ or, ‘We regret having been part of this.’”

Last week, in a speech at the House of Commons, conservative former minister John Hayes posited the Fourth Plinth as a suitable site for a Queen Elizabeth II statue. Around the same time, The Times reported that the plinth is indeed among the locations being considered for a piece that would “permanently mark” the queen’s life.

But not everyone agrees with the idea. Prue Leith, a longtime television personality and Great British Bake Off judge who helped found the Fourth Plinth program in 1998, during her tenure as the chairperson of the Royal Society of Arts, pushed back on the idea. In an interview with the Guardian, she said, “I don’t think the Fourth Plinth is special enough for the queen. I think there should be a statue for her outside Westminster Abbey where she was crowned.”

Michael Elmgreen, one half of the Scandinavian artist duo Elmgreen & Dragset, which contributed a sculpture to the plinth in 2012, echoed the sentiment. “Through many of the amazing artistic contributions over the years I think the Fourth Plinth has become The People’s Plinth and [is] no longer a suitable site for celebrating members of the royal family,” he told the Art Newspaper.

Kambalu’s monument is set to remain installed atop the plinth for the next two years, after which point a sculpture by Mexican artist Teresa Margolles, made from casts of 850 trans peoples’ faces, is scheduled to replace it.

The Telegraph reported that, as of now, the schedule for the sculpture series is expected to move ahead as planned. A spokesperson for London mayor Sadiq Khan’s office told the paper that a memorial to the queen will not be installed on the Fourth Plinth in the “foreseeable future.”

“A statue of the queen at a suitable location in London is a matter for the royal family to consider, and of course the Greater London Authority stands ready to support them in their wishes,” the mayor’s office said.

Forrest Bess Was a Fisherman by Day and Painter of Wild Visions by Night. A New Show Explores His Legacy