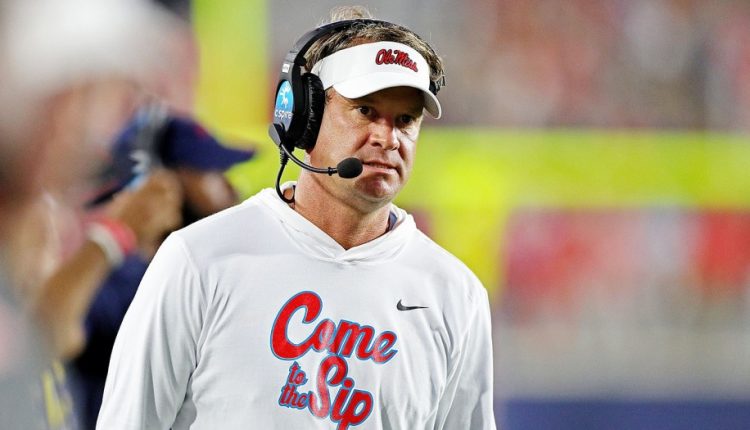 Although it culminated with a painful flop in the Sugar Bowl, the 2021 season was a momentous one for coach Lane Kiffin and the Mississippi Rebels. In his second season in Oxford, Kiffin led the Rebels to their first-ever 10-win regular season and, depending on your preferred metric, one of the program’s best campaigns of the past 50 years.1

Then, just about everyone responsible for it left.

Between the NFL Draft and other forms of attrition, an offseason exodus claimed the team’s All-American defensive end, leading tackler, top four rushers, one of the most prolific quarterbacks in school history and the offensive coordinator. Mississippi scored an SEC-best 33 rushing touchdowns in 2021, but opened fall camp without a single player responsible for any of them. The Rebels secured nearly a fifth of its 2022 roster from the transfer portal.

Six weeks into the 2022 season, the fresh talent and different perspective haven’t cost the Rebels on the scoreboard. In fact, under the guidance of new co-offensive coordinators Charlie Weis Jr. and John David Baker, a run-heavy philosophy has taken hold in Mississippi.

“There’s a lot of new,” Kiffin succinctly said in March of the 30-plus new faces on his team. “There’s a lot of different things, but that comes with success. And change is good. You have to embrace change, and new people have new ideas.”

Kiffin and his coordinators have dialed up a run on 58.5 percent of offensive snaps, a rush rate 10.2 percentage points higher than it was a season ago and the second highest single-season rate of any in Kiffin’s college coaching career (as either a head coach or offensive coordinator).2

Through five games, only nine Football Bowl Subdivision teams had accrued a higher percentage of team yards on the ground than Mississippi (55.7 percent). Three of them are military academies that execute the archaic, run-heavy flexbone offense. Kiffin’s approach, by contrast, is quite a bit more modern than that.

To replace lost production in the backfield, Kiffin looked to the recruiting trail and the transfer portal. Zach Evans, a former 5-star recruit and TCU’s leading rusher in 2021, transferred into the program in January. Freshman Quinshon Judkins has exploded onto the scene, scoring at least one touchdown in all but one of his first six college games. The three-star prospect has more broken tackles (20) than any player in the SEC and more rushing yards by a Mississippi freshman in the first five games of a season since at least 1976.

Together, the tandem has paced the Rebels to the second-most rushing yards (1,452) and the second-most expected points added per rush attempt (0.20) of any SEC school. Mississippi has 21 rushing touchdowns, tied for the most of any team in the conference. The Rebels featured a 100-yard rusher in each of the team’s first five games, the first time since 1999 that the team had a running back eclipse the century mark in five consecutive games.

That ground-bound formula has proven to be fruitful. Despite rushing’s reputation as the ugly step-sibling of offensive tactics, Mississippi’s overall attack has been more productive with the increased focus on the running game, whether you look at simple points per game (which are up from 33.7 last year to 39.7 this year) or fancier metrics such as expected points added per play and offensive efficiency.

Opponents have taken notice, too. Vanderbilt shored up its run defense against Mississippi last weekend, forcing Kiffin to put more passing plays on the docket. It worked early: The Rebels trailed at halftime for the first time all season. But it didn’t last.

“They will take what you give them,” said Vanderbilt coach Clark Lea.

Lea was right: A third-quarter onslaught ensued, during which the Rebels outgained the Commodores by nearly 200 yards and outscored them 21-0. In total, Mississippi rattled off 35 straight points, QB Jaxson Dart threw for a career-high in yards, wide receiver Jonathan Mingo set the school’s single-game receiving yards record and the Rebels earned the team’s first 6-0 start to a season since 2014.

What’s even more surprising is that Kiffin has been able to maintain his signature high-tempo attack despite running the ball so often. Through six games, Mississippi has possessed the ball for a total of 24 minutes and 12 seconds, nearly six minutes short of the national average and the least amount of time by any team through six games in a season since 2018. Mississippi is huddling before 34 percent of offensive snaps, up 8 percentage points from this time last season. Yet the average drive (1 minute and 59 seconds) and average play (27.6 seconds) are as fast or faster than Mississippi has ever been under Kiffin.

So how can Kiffin play up-tempo and rely so heavily on his run game? It’s simple: big plays. Despite the brief time it has possessed the football, Mississippi has scored 31 offensive touchdowns, tied for the fifth most in the nation. Against Vanderbilt alone, Mississippi had three one-play scoring drives. The most any other team has all season is four. The Rebels have produced 41 plays of 20-plus yards, more than they did in any season under Kiffin through six games.

“We have spurts, where like that second half, where it just looks like we’re unstoppable,” Dart said after the Vanderbilt game. “So we just got to be able to find that and find that rhythm, just find that consistency every game. And, you know, you know, there’s no limit to what we can achieve this year.”

Mississippi’s postseason aspirations ride on the final four games of the regular season, a brutal month-long stint that includes two ranked opponents and trips to College Station and Fayetteville. It remains to be seen if Kiffin’s run-heavy scheme can hold up against that physical SEC defensive scrutiny, but for now this Rebels team is a case study in coaching flexibility — using new ingredients to cook up something different but just as tasty.