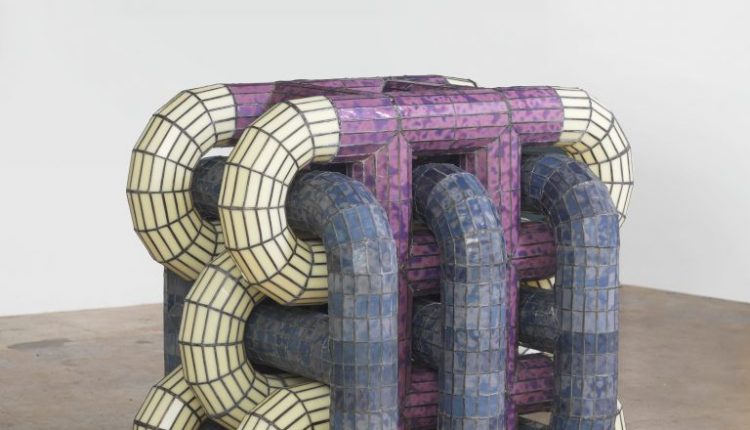 When the fifth edition of the “Greater New York” survey exhibition opened last year, one presentation that generated buzz was a group of jewel-toned sculptures that would look as at home on a playground as in its MoMA PS1 gallery. A cluster of interlocking arches seemed caught in mid-somersault on the floor, near what looked like pairs of socked legs doing the splits. On one wall, three large, jointed hooks evoked the inviting frame of a slide or pool ladder.

Not that any of these are meant for climbing—not least of all because each is made of stained glass. Kristi Cavataro, the artist behind these angular works, liberates the material from its staid place in windows and lamps, and builds thrilling tubular forms that inhabit their own dimension of reality. Each is composed of grids of rectilinear glass pieces that Cavataro hand-cuts and grinds down, then solders in a traditional technique popularized by Tiffany Studios (plywood armatures that she later removes provide temporary support during the construction process). At times, the resulting hollow forms merge into a seamless whole; other times, one serpentine module nests within another, locked in an embrace. Cavataro’s works have garnered praise from the New Yorker to Interview to Art in America, and established the 30-year-old Connecticut native as a sculptor to watch. It’s been a fast and remarkable ascent: She sold out her debut solo show at Ramiken gallery in April 2021, and a few months after was included in “Greater New York,” where she was the youngest participating artist. Those sculptures commanded waiting lists, as do the six works currently on view in her second solo exhibition with Ramiken, which opened on September 7 and runs through October 8. Each is priced between $20,000 and $40,000, up from $9,000 to $18,000 last year.

That Cavataro’s career has caught such momentum is even more impressive considering that she began working with stained glass about four years ago. Prior to this body of work, she had been doing a lot of mold-making and casting with foam and plaster while studying at Cooper Union. “I’d make dozens or hundreds of the same forms—these recurring ‘U’ or ‘O’ shapes—and then reuse them in different orientations,” she said. “I’ve always worked in this way, where I develop a kind of formal system that has elemental forms, and make individual compositions and singular objects that are made of these recurring parts.” This process of revisiting forms has helped her find her stride early as a sculptor of glass, which she began experimenting with during a 2018 residency at Long Island’s Lighthouse Works. Certain components, like curves or 90-degree intersections, serve as “templates,” as she put it, that she builds on and reconfigures to tease out different visual effects. At Ramiken, keen-eyed visitors will notice how one shape, curled like a rolled tongue, manifests in multiple situations: on a wall, where it cradles a cross-like structure, or flipped on its side to lock arms with the rest of a floor piece. “I had this idea of how certain forms could be constructed, and I started small with a couple of these tube-and-curve forms that I’m still using even as the works have gotten larger,” Cavataro said. “I really wasn’t sure if technically it would work, and when I was able to work through these engineering issues, a lot of things opened up, and it became a self-propelling process.” Career-wise, her breakthrough moment came when she met Mike Egan, Ramiken’s cofounder. Egan first saw her work in early 2020 when he was on the jury for a grant she applied for. “As soon as I saw the images of the work, it was like I’d been looking for that for years,” he recalled. “It was a type of sculpture that seemed like it was obvious, like it should exist, but simply had never been made.” They arranged a couple of studio visits, and he offered her a show. That exhibition came together during the height of the lockdown two years ago, when Cavataro was able to work as she does best: in long blocks of time, isolated in her Bronx studio, where she’s been based since graduating from Cooper Union in 2015. That show, she said, felt like an introduction to her many ideas. The current one is tighter, and it demonstrates how she’s pushing her language toward more complex compositions. “I had to solve a lot more engineering-type issues, figuring out the limits of the process and of the scale and what order things need to be assembled in,” she said. “I’ve really gotten deep into the idea of this system and what it’s capable of.”

Driving this fixation is the infinite ways that color exists in glass. It’s one of the reasons why Cavataro was drawn to the material in the first place. “There’s a luminosity to the color that feels really different than other materials that are colored through pigments or dyes,” she said. “I like a difficult color, a color that feels hard to pin down. Certainly in the case of glass, color can play a really active role in sculpture. It can be a dominant force in building your perception of an object.” Sourced from various sheet-glass manufacturers, her glass ranges from single-hued, opaque surfaces to splotched specimens known as ring mottles that have a handmade quality. Some are transparent, which introduces the technical challenge of thinking about the interaction of light; some have subtle textures. How Cavataro combines these colors and finishes determine their moods and associations, which can surprise and enthrall. She cites Anne Truitt, Donald Judd, and Sol LeWitt among her influences, for their approaches to systems and their mastery of material.

Cavataro’s work is so carefully planned and executed that many viewers assume that she has her designs fabricated. Due, in part, to the laborious process, there is “a lot more demand than there is work available,” Egan said, noting that museums in Europe, in particular, have expressed interest. “The freshness of a new abstract vocabulary expressed through extremely resolved formal sculpture—it’s definitely a new thing,” he added. Works by Kristi Cavataro in the foreground and on the wall at “Greater New York.” Image courtesy MoMA PS1. Photo: Marissa Alper.

Cavataro describes the experience of seeing her sculptures out in the world as “this coming to the surface,” given how intensely she dives into the process. She admits that she’s bad at taking breaks, but at the same time she’s looking forward to trying new approaches. “Every piece I’ve made so far offers a lot of lessons and questions, and it feels like there’s lots of directions I want to try to go in,” she said. “There’s definitely more coming.”

For a Year, New York’s Artists Space Will Transform Its Basement Into a Venue for Cutting-Edge Performance