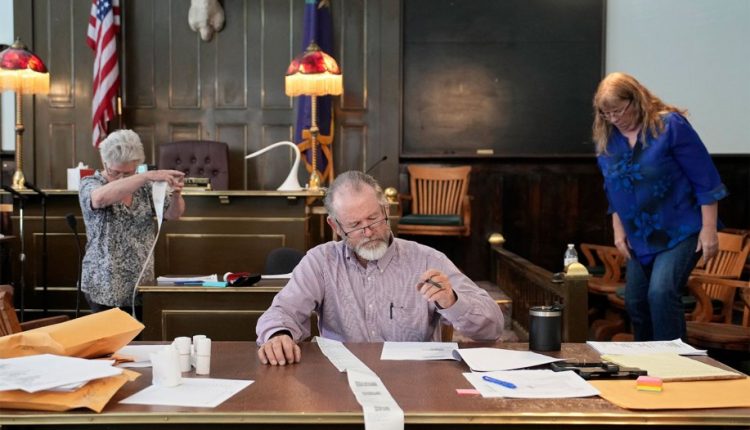 “We’ve had the death threats,” Stacie Wilke-McCulloch said. “We’ve had the, ‘We know where you live,’ and all that.” As a trustee on the school board for Carson City, Nevada, for the past 14 years, Wilke-McCulloch is no stranger to harassment, particularly as school boards bore the brunt of criticism over controversial curricula and school closures related to COVID-19. As a result, she’s gained a thick skin that may serve her well in what she hopes will be her next job: Carson City County Clerk-Recorder.

Once occupying a low-profile, largely bureaucratic position, county clerks are increasingly the target of intense public vitriol. Typically the chief election official for their communities, county clerks and other local election workers have faced harassment from voters convinced the 2020 election was fraudulent, thanks to former President Donald Trump’s baseless claims of a stolen election. As a result, some election officials are leaving their posts — and in some places, election deniers are signing up to replace them.

But that’s only one part of the story. Across the country, many local election officials are staying put with the support of their communities. And in Nevada, where county clerks are up for election this fall, the full spectrum of local election administration is on display: the good, the bad and the conspiracy-riddled.

In Carson City, Clerk-Recorder Aubrey Rowlatt is not running for reelection after serving just one term, saying she wanted to spend more time with her family. But she also told the Nevada Independent that she was burned out and wasn’t looking forward to administering this year’s election after how “emotionally charged” the 2020 election was. That said, Rowlatt won’t be replaced by an election denier. In interviews with FiveThirtyEight, both Wilke-McCulloch and opponent Scott Hoen said they believed the 2020 election was legitimate.

Want to know who will win the House? Watch these 4 districts | FiveThirtyEight

Out of Nevada’s 17 counties and county equivalents, 15 have elected county clerks who serve as the chief election official (two counties, Clark and Washoe, have an appointed registrar of voters who oversees elections). Of those 15, 12 have an incumbent clerk who is running unopposed in the general election next month, many of whom have been in the job for years. While some had to fend off challengers in the primary, others, like White Pine Clerk Nichole Baldwin, ran unopposed there, too. Baldwin — who was first elected in 2014 — said that although the 2020 election led to an unprecedented level of public response and distrust, she hasn’t experienced harassment or threats.

“Every time the public has approached us with questions or assertions of failed election integrity, I’ve been able to effectively respond to them directly, and whether or not they accept my answer, they walk away,” Baldwin said. “There are a lot of us [clerks] who are sticking it out.”

But the Silver State hasn’t been completely spared the trend of election deniers running to take control of election administration. Trump’s claims of a stolen 2020 election sowed distrust in Nye County, where the voting machines used to not only cast but also count ballots came under intense scrutiny. In March, the county commissioners voted to recommend the county switch to hand-counting paper ballots, despite County Clerk Sandra Merlino’s defense of the system’s security. As a result, Merlino threw in the towel after more than 20 years in the job, retiring this summer, the ACLU is suing the county, and an election denier was appointed to replace Merlino. Mark Kampf, who won the Republican nomination for county clerk in June, was appointed to fill Merlino’s post through the election, in which he is running against one other candidate. Kampf has repeated election fraud conspiracy theories and said he believes Trump won in 2020.

And he’s not alone. The Storey County Clerk-Treasurer was, until February of this year, Vanessa Stephens, who resigned; it’s currently Jim Hindle, who signed on to serve as one of the illegitimate “alternate electors” for Trump in an attempt to overturn the state’s presidential election results. Hindle won a closely contested GOP primary in the summer, and is also running unopposed in November. And Jim Marchant, the Republican nominee to be the top election official in the state, said not only that the 2020 election was fraudulent, but also that the vote of Nevadans “hasn’t counted for decades,” falsely claiming election winners had been “selected” rather than elected.

And even in counties where the incumbent clerk has remained in place, election conspiracy theories are fueling changes. County commissioners floated the idea of abandoning voting machines in Elko and Lincoln counties, and in Esmeralda County — as in Nye County — it was adopted. Though voting using hand-marked paper ballots is considered the gold standard for election security, hand-counting those ballots — as opposed to using vote-tabulation machines — is time-intensive, costly and prone to error. As long as there are paper records and precautions taken to limit risk, vote-tabulation machines are considered both secure and efficient. Meanwhile, Lander County commissioners voted to spend nearly a quarter of a million dollars to replace the Dominion voting machines used with ones made by another company, ES&S, due to false conspiracy theories around Dominion.

So while the threat of election deniers taking over election administration hasn’t infiltrated every corner of Nevada, a meaningful shift is happening, according to David Damore, a political science professor at the University of Nevada, Las Vegas. “Election administration is now a partisan issue whereas in the past it was just government doing government business,” Damore said. In this way, Nevada is a microcosm of what we’re seeing in elections across the U.S. It’s not as though veteran, trusted election administrators are being replaced wholesale with election-denying conspiracy theorists, but that threat is real. We’re now in an era where political parties are not only concerned with who wins elections, but also who runs them.

Rosa Bonheur Was One of the Most Influential Artists of Her Time. Two Centuries Later, Museums Are Giving Her Remarkable Animal Portraits New Life