Is Tennessee Football Back? We’ll Know If They Beat Bama. 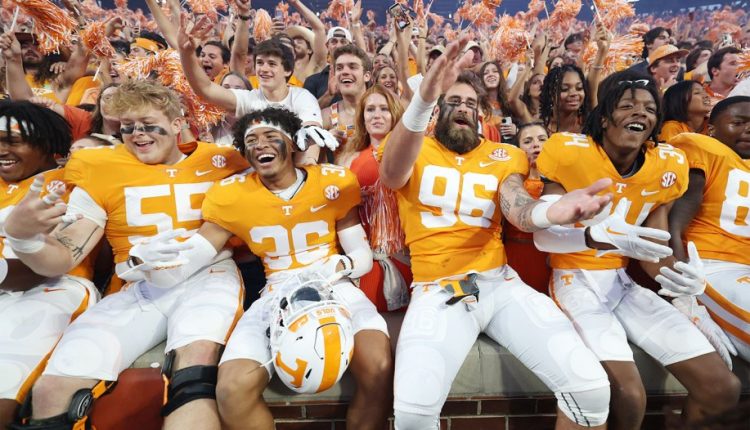 The entire Southeastern Conference has suffered in one way or another from Nick Saban’s dominance at Alabama. But since Saban got to Tuscaloosa in 2007, few teams have drawn a shorter straw than Tennessee. The Volunteers are the only team in the conference’s East division that has to play the Crimson Tide every year, part of a protected rivalry traditionally held (though, these days, sometimes not) on the Third Saturday in October. And lately, it’s been less a rivalry than an annual meeting between a hammer and a nail: Saban has beaten the Vols 15 times in 15 chances as Alabama’s coach, by an average margin of 25.9 points per game. That includes 2016, when Tennessee rose to No. 9 in the polls before hosting the Tide … and promptly took a 39-point beating, the rivalry’s most lopsided contest since 1906. Whenever Tennessee has looked like it might get back to the upper SEC echelon it used to inhabit, Alabama has been standing in the way.

But this year, for the first time in a long time, the Vols don’t feel like an afterthought heading into the Third Saturday (which is actually being held on October’s third Saturday, at 3:30 p.m. ET on CBS). Both teams are unbeaten. Alabama’s Heisman Trophy-winning quarterback, Bryce Young, may play but has not been healthy. The Vols are only 7.5-point underdogs, the first time the spread has been fewer than 13 in Bama’s direction since 2008. Whether Tennessee fans are optimistic is unclear. Walk up to one on the street, tell them that you think their team might beat Bama, and they may not respond well. But at least until kickoff and maybe after, these are the good times in Knoxville. Tennessee is ranked sixth in the AP Poll, the highest they’ve been since 2005. ESPN’s College GameDay will be on campus for the second time in a month.

If it all feels sudden, it should. Tennessee was somewhere between a disaster and a punchline as recently as two seasons ago. The program spent a long time in the wilderness during the 2010s but especially struggled since the end of 2017, when a literal fan revolt prevented the hiring of then-Ohio State defensive coordinator Greg Schiano and led to the hiring of Alabama defensive coordinator Jeremy Pruitt. That flamed out spectacularly after 2020, with Tennessee facing a major roster exodus (among other problems). The school hired former University of Central Florida athletic director Danny White, who in turn hired former UCF head coach Josh Heupel. The team was better than expected in 2021, and now, just a year later, the Vols look nationally elite. That it seems a bit unlikely — but not impossible — that the Vols can conquer Bama tells you just how astonishingly fast the turnaround in Knoxville has been.

Running with the contenders used to be commonplace for Tennessee. The team won a national title in 1998 and was a consistent winner for most of the next decade. But there were dark ages to come. Maybe the program broke bad when Phillip Fulmer, the coach who won that championship, retired after 2008. Maybe it started after 2007, the year of Fulmer’s last winning record. Maybe it was when the school hired Lane Kiffin to replace Fulmer, or when Derek Dooley followed Kiffin, who bolted for USC after one season. It’s fuzzy, but if Saban’s ‘07 arrival at Alabama marked a new era in the SEC, that also makes it a good period over which to measure Tennessee’s problems. From 2007 to 2020, Pruitt’s last season, Tennessee was 88-86 overall and 42-72 in the SEC, the 10th-best record in the 14-team league.1

Again, one problem was the scheduling draw. Getting Alabama from the West every year contributed to Tennessee having the SEC’s fifth-hardest schedule (by opponent winning percentage) in conference play over those years. No other East team was higher than ninth. The program also regularly struggled to run the ball effectively. (The 2011 team under Dooley averaged 2.3 yards per carry in conference play, the worst figure of any SEC team in this period aside from Mike Leach’s aerial 2020 Mississippi State squad.) Fulmer and his predecessor Johnny Majors had made a habit of winning with prolific quarterbacks — Andy Kelly, Heath Shuler, some guy named Peyton Manning, and Tee Martin — but by the 2000s, the well was drying up. There were some solid QBs and some great moments, like Joshua Dobbs’s Hail Mary to Jauan Jennings to beat Georgia in 2016. But in conference play, Tennessee was eighth in the SEC in Total QBR, adjusted for strength of schedule and season, from 2007 to 2020. The program did not have its own Tim Tebow, Cam Newton, Johnny Manziel, Tua Tagovailoa or Joe Burrow. Meanwhile, the defense dwelled in the middle to bottom of the SEC in yards allowed per play and points allowed per game.

Tennessee’s improvement under Heupel starts with playing an entirely different style of football.. Heupel, a former quarterback at Oklahoma, has a unique way of doing business on that side of the ball. He loves two things: up-tempo offenses and deep, perimeter passes. The 2022 Vols use just 21.3 seconds of clock per offensive snap, the fifth-fastest rate in the Football Bowl Subdivision, per ESPN’s Stats and Information Group. They play almost the entire game with three receivers, one running back, and one tight end on the field, and they love to chuck it deep to those targets. Tennessee’s average intended pass travels 11.0 yards downfield, 11th-deepest in FBS. They run lots of run/pass options (in terms of raw number of RPOs, they’re running the 12th-most in FBS). They commonly line up receivers almost on the sidelines, preferring wide splits to spread the defense and get receivers isolated against defensive backs. It works, because QB Hendon Hooker has a huge arm and several of his receivers (Jalin Hyatt, Cedric Tillman and USC transfer Bru McCoy) have come on strong as playmaking threats.

Tennessee’s nasty offensive line underpins all of this success. The unit allows pressure on just 16.1 percent of dropbacks, the second-lowest rate in FBS, despite facing a blitz once every three snaps, well above the national average of 27 percent. Even when defenses bring heat, Hooker has the time he needs to use his rocket launcher. The Vols also have an efficient running game, led by Hooker and tailbacks Jaylen Wright and Jabari Small. They are 13th in FBS in expected points added per game from rushing. And when the offensive line smells blood, it gets it: Tennessee has reached goal-to-go on 17 drives this season and has scored a touchdown on every single one of them. The national touchdown rate on such drives is 76 percent, and no other team is at 100 percent with more than 10 goal-to-go possessions.

The defense is less material to Tennessee’s breakthrough, but has held up its end of the bargain. While the offense is currently second in Bill Connelly’s SP+ metric, the defense is 39th, up a bit from 47th at the end of last season. Tennessee has figured out run defense in particular, where the Vols are 17th in EPA per game. The defense has had less success against the pass, where it’s 74th. If Tennessee has a flaw in its exhaust port for Alabama to exploit, the most obvious is a problem with explosive passing plays. The defense has allowed four 20-plus-yard completions per game, tied for 110th-best in FBS.

Even so, Heupel’s greatest trick so far is that he has found balance. Under Pruitt, and even in the final year of his fired predecessor Butch Jones, Tennessee was a no-offense, all-defense program. Between 2017 and 2020, Tennessee never ranked better than 74th in Offensive SP+ or worse than 54th in Defensive SP+. For better and worse, Heupel flipped the script in 2021, and Tennessee went 7-6. The 2022 team has kept scoring while managing to stop the bleeding on defense. The result is a 5-0 start.

It might always be a bit of a mystery how Tennessee turned its fortunes so quickly after a 3-7 record in 2020 gave way to coaching turmoil and heavy losses in the transfer portal. One answer is that while the portal takes, it can also give. Hooker was a decent starter for two years at Virginia Tech, but in the Tennessee offense, he has gone supernova. McCoy, one of his favorite receivers, had a multi-stop career at Texas and USC before landing in Knoxville. Left tackle Gerald Mincey came from Florida. But most of Tennessee’s players are homegrown, and many were also around for the doomed Pruitt era. (Right tackle Darnell Wright, a former five-star signee under Pruitt, was a great player for Heupel to inherit.)

The program’s comeback story has also unfolded against a backdrop of NCAA trouble related to Pruitt’s tenure. The association has charged Tennessee with 18 Level I violations, the most serious the NCAA can levy (though “serious” is a sliding scale at this point), and sanctions could be coming once the case is adjudicated. When Heupel signed with Tennessee, his contract had a clause that screamed out for patience: that it would automatically extend by a year if the NCAA issued penalties to the football program. It turns out that Heupel didn’t need that language at all. The school extended his deal anyway in July, and he could be in line for more after this season. Patience is a virtue, but it can also be overrated.

But the true test of Tennessee’s turnaround will come on Saturday against the No. 3 Crimson Tide. After all, the Volunteers have been in a vaguely similar place before — remember that hot start in 2016? — only to see Saban’s Bama steamroller squash any hopes of a return to glory. There’s no guarantee that the same fate doesn’t await this year’s Vols, too. But either way, Tennessee fans can finally revive the old feelings of pride in a program that has waited a long time for this moment.

Music Legend Lionel Richie Bought a Trio of Works by Calida Rawles About the Overturning of Roe v. Wade at Frieze London