In Times of Uncertainty, Younger Collectors Turn to Time-Tested Works of Modern and Classical Art at Frieze Masters 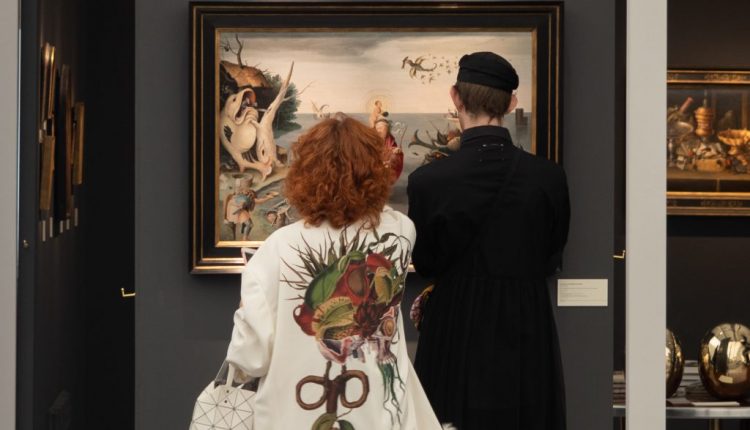 Just a few minutes after 11 a.m., as the doors of Frieze Masters opened for its Wednesday VIP preview, Nathan Clements-Gillespie, the fair’s director, was spotted greeting Jay Chou, the Mando-Pop king and avid art collector from Taiwan, who arrived in London with his entourage.

Sporting a black hoodie and denim jacket, the 43-year-old celebrity from Asia was seen first stopping by the shared booth of Belgian dealer Yves Macaux, who specializes in decorative arts, and London dealer Richard Nagy, who is showcasing a range of works from the early 20th century by Egon Schiele, Otto Dix, and Ludwig Meidner. Chou then wandered through the aisles before the crowd swarmed in, taking a closer look at works by other masters, such as Alberto Giacometti’s 1947 painting Femme Assise (La Mère de L’Artiste), which has an asking price of $6.3 million.

It might not be a huge surprise to see Chou browsing Frieze Masters, since he already made his enthusiasm for blue-chip artists obvious in his viral music video Greatest Works of Art in July. And he was not the only younger face seen at the fair, which traditionally features a vast range of work made before 2000, spanning six millennia of history, and which normally attracts a more mature crowd. The preview day, however, had a solid turnout of visitors in their 40s, 30s, and even younger, from diverse ethnicities, taking snaps of prized masterpieces and enquiring about prices. “There are many familiar faces and collectors, but at the same time an obvious appearance of younger collectors. More Asians are back as well,” observed Thomas Stauffer, an art advisor and co-founder of Gerber & Stauffer Fine Arts in Zurich.

Re-discovering forgotten or underestimated artists is an ongoing trend, Stauffer noted, citing examples such as March Avery at Larkin Erdmann Gallery, Vivian Springford at Almine Rech, or Meret Oppenheim, the Swiss Surrealist who will have a major retrospective at MoMA in New York later this month. And young collectors are catching up.

“In these economically and politically volatile times, younger collectors are spending more time on researching and looking at historically overlooked positions, which certainly helps to fuel the market for these underrated artists and nurtures the trend to discover overlooked historical artists,” Stauffer told Artnet News.

This edition of Frieze Masters, which celebrates its 10th anniversary and recent launch in Seoul, features more than 120 galleries, many of them with a strong emphasis on female artists. Sales might not be moving as quickly as its contemporary counterpart Frieze London, but the fair’s atmosphere was certainly energetic, and visitors appeared to be happy to be back to mask-free art shopping. September’s debut in the South Korean capital has certainly contributed to the stunning boost in attendance by collectors from Asia, noted Clements-Gillespie. There are also new Asian galleries participating, such as Johyun Gallery from Busan, which is presenting a group show of Korean masters, including Lee Ufan, Park Seo-bo, Lee Bae, and the London debut of Kim Chong Hak, with prices ranging from $450,000 to $820,000. Works by Lee Bae were in high demand, and four of the pieces brought to London were already on reserve, said the gallery’s director Minyoung Joo.

Attendance on the fair’s first day also appeared to have returned to pre-pandemic levels, Clements-Gillespie added, and the buzz surrounding next week’s Paris+ launch did not appear to be a concern either.

The strong U.S. dollar, however, could make a difference, as it could translate into major discounts for purchases made in pounds or euros. Clements-Gillespie said that he has been bumping into American friends at gallery openings since last Thursday.  They arrived earlier “because they wanted to enjoy their time in London. And the strong dollar made it easier,” he told Artnet News. The favorable conversion rate does not applies to only Americans, however. “I think at [a higher] level, so many people are working in dollars.” Some exhibitors shared a general confidence in the market. Among them was Stephane Custot of Waddington Custot gallery. Buyers’s habit might have changed amid uncertain times, he told Artnet News, and collectors might take longer to decide, but deals could still be closed after the fair, especially for works at higher price points.

“In financially turbulent times, collectors are ultra-discerning and are looking for nothing less than museum quality. Considering the calibre of the works we are showing this year, we are confident,” said Custot, whose gallery is show works priced between £350,000 to well above £2 million, including a rare work from Jean Fautrier’s “Otages“ series (1943–45) that he created in a mental asylum. “It is a powerful and timely reminder of the atrocities of war, and a stark reality check to be found among the treasures of the fair.”

The confidence in the market was reflected by the level of some of the works presented at the fair. London gallery Marlborough brought a stellar line-up of British Modern art with price points starting from $35,000 and all the way up to Francis Bacon’s painting, Study from the Human Body – Figure in Movement (1982), with a price tag well above $20 million that was already on reserve. Pace rebuilt Mary Corse’s monumental installation The Cold Room (1968/2022) in the Spotlight section dedicated to women artists. The presentation is curated by Camille Morineau, co-founder and research director of Archives of Women Artists, Research, and Exhibitions (AWARE), and her team.

Kasmin from New York presented a group show, with works priced between $35,000 to under $5 million, including a large-scale piece by Lee Krasner from 1951. The gallery confirmed the sales of eight works during the fair’s first hour, including Max Ernst, Jane Freilicher, and two works by Lynne Drexlers. The gallery’s managing director Nick Olney said works were sold to collectors in England, the U.S., and Asia, adding that younger collectors were not focusing on a specific type of art, but were “open to building collections of old and new art.”

At least three major museum acquisitions were made from the Spotlight section, Artnet News has learned. Kó gallery sold several works by Nike Davies-Okundaye in the range of $10,000 to $35,000 to institutions and private collections in London, the U.S., and Europe. James Brett of the Gallery of Everything said it had sold multiple works by Sister Gertrude Morgan in the range of £10,000 to £35,000, with many museums and major collections showing interest.

Gallery Hyundai, which presented a solo booth of Korean avant-garde artist Lee Kang-so, sold several works from around $82,000 to $90,000, and was in talks with museums from Europe for works priced in six-digit figures. Johnny Van Haeften sold a rare Jan Bruegel the Elder for around $10 million, the priciest sale known on the preview day, and a Hendrick van Steenwyck the Younger for approximately $200,000.

A Scion of London’s Cultural Elite, Gallerist Sid Motion Is an ‘Artist Whisperer’ Who Tries to Show Great Work You Can Actually Afford