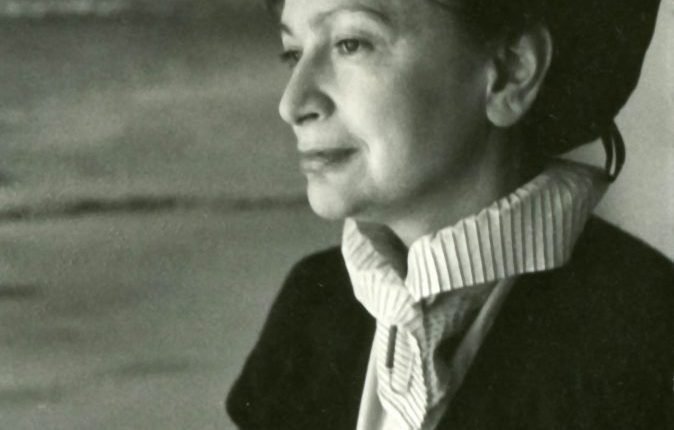 If you’ve heard of Hedda Sterne, it might be because of a notorious photo of her published in LIFE magazine in 1951. There she was, a lone woman towering over a jumble of painters that included Pollock, Rothko, de Kooning, and Motherwell, standing on a chair in the back row. Sterne lived for a full century, long enough to outlast everyone in that iconic frame, but sadly also long enough to see herself written out of histories of this New York School in which she was clearly a key player.

“I’ve been working, you see how old I am, since I was seven,” said an octogenarian Sterne in a 1992 interview with BOMB magazine. “And the one thing people remember is that photograph.”

The photo, taken by Nina Leen and captioned “The Irascibles,” gathered 15 out of 28 artists who jointly penned a letter to the Metropolitan Museum of Art to protest its hostile attitude toward modern art. But as Sterne’s lament implies, it doesn’t accurately capture her or her eight-decade artistic practice, which included surrealist collages and spinnable paintings, abstract drawings and colorful prints. A better descriptor for Sterne than “irascible” may be, instead, indefinable. The breakout moment for this Romanian-born artist was in Paris as a Surrealist. She then showed with the Abstract Expressionists in her adopted home of New York, all the while alternating media and fluctuating between abstraction and figuration. Trying to pin a style to her work is like throwing a dart at a moving target.

Sterne was constantly transforming her work from one thing to another, and her solo show opening this week at the Venice outpost of Victoria Miro gallery (which newly represents her estate) is aptly titled “Metamorphoses.”

The show, which comes at a moment when Sterne’s market is on the ascent, will focus on her works of the late 1960s and early 1970s, a productive period during which she created her “Lettuce” paintings of concentric spirals made with watered down acrylics, and her “Baldanders” series of drawings that flow from tightly detailed to loosely abstract.

Sterne first trained in Bucharest, in Vienna, and in the studios of Fernand Léger and André Lhote before attracting Peggy Guggenheim’s attention with the torn-paper collages she exhibited at the 1938 Salon des Surindépendants in Paris. In the early 1940s, after escaping Nazi Europe and moving into a studio on New York’s East 50th Street, she illustrated her fascination with Americana through paintings of kitchens, highways, and machinery. While paring down such sights to minimalistic lines, Sterne also painted portraits—including a large-scale project called Everyone, where she papered walls with likenesses of strangers and acquaintances. At the end of her career, and until she suffered a stroke in 2004, she spent hours every day making abstract drawings.

“I met many artists in New York who believed progress is linear, from figure to abstract,” Sterne said in a 2006 interview with Art in America. “I never followed that idea.”

Sterne also didn’t follow ideas about conventional media or formats. In the early 1950s she pioneered using spray paint on canvas—a material that had only hit hardware store shelves a year or two before. She spray-painted landscapes of highways, intentionally matching the speed of her technique to the speed of her subject. Around that time, she also made round paintings mounted on a kind of lazy Susan device, with the intention that viewers spin them.

“The meaning [of these works] kept changing,” Sterne later explained. “For instance, the color would suggest nearness and then you’d turn it another way and it would suggest distance.” Like these tondos, Sterne was always moving in different directions. “[She’s] been called an artist of many styles. But what was often missed during her incredibly long, eight-decade career was the conceptual continuity in all her work,” said Shaina Larrivee, executive director of the Hedda Sterne Foundation. “This is a different way to view her practice, more independent than inconsistent.”

Like her ever-changing work, Sterne’s market is also hard to define. Coinciding with an uptick in curatorial attention over the past few years, her top 10 auction records have all been set since 2019—for paintings spanning figuration to abstraction, and from the 1950s to the 1990s.

While her works are still relatively rare at auction, five have hit the block so far this year, and all of them exceeded their high estimates. Her record of $504,000 was set at Sotheby’s this past May, for a 1955 oil and spray paint on canvas (which more than tripled its high estimate). That same month, a 1982 canvas estimated at just $10,000 to $15,000 sold for almost 20 times expectations, reaching $275,000.

Her work has been the subject of solo exhibitions at the Queens Museum, the Montclair Art Museum, and the Krannert Art Museum, and is held in esteemed private collections, such as that of Rachel Lambert Mellon, who bought a 1940s Sterne painting directly from the Betty Parsons Gallery before it was later offered at Sotheby’s, in 2014.

“There is really strong interest across the board,” said Victoria Miro about Sterne’s market, which doesn’t currently focus on a certain period or subject. Prices for works in the new show range from $15,000 to $300,000.

When Miro showed paintings from Sterne’s “Horizontal-Vertical” series in early 2020, the works all sold within a day of the exhibition opening. “Because the work has not been seen here in Europe so recently it feels incredibly fresh and new, which is always exciting for collectors and curators alike.” According to Larrivee, no one period of the artist’s diverse output is singled out by scholars and curators, either. That said, Sterne was most heavily collected by institutions during a peak New York School period in the 1950s, with works being bought off the walls of her gallery shows. Museums tend to hold and exhibit her work of the 1940s and ‘50s.

Sterne’s works in museum collections have emerged from storage in the past few years, and her work is now on view in permanent collection installations at the Whitney Museum, MoMA, and the Metropolitan Museum of Art. She’s also been included in important group exhibitions.

“There has been an important shift in recent years toward reframing our history of 20th century art, and many of Hedda Sterne’s paintings that have been in museum collections since the 1950s are now being seen on gallery walls for the first time in decades,” said Larrivee. “This has certainly helped to increase interest in her enigmatic work and story.”

As curiosity about Sterne’s life and work grow, and now with new gallery representation in Europe, the best of her exhibitions may be yet to come. “The first years, beginning in 1943, I’ve shown practically every year, and the more I’ve aged the more reluctant I am to show,” Sterne said in her 80s. Then she added, mischievously, “but I’ll have some terrific shows posthumously.”

Mega-Gallery Hauser & Wirth Is Getting Into the Auction Business—Temporarily, and for a Good Cause