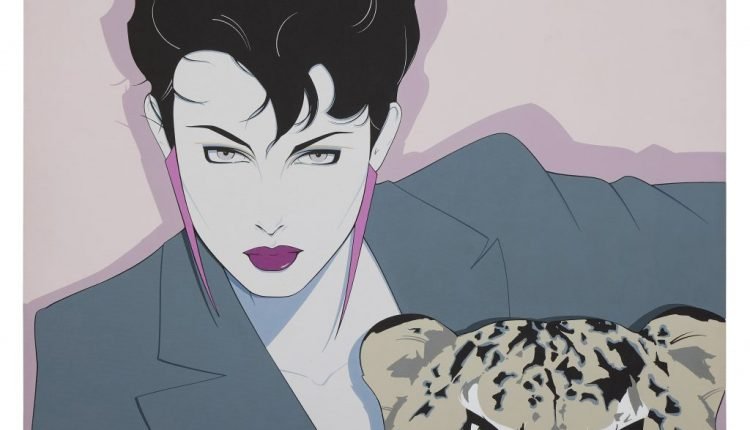 They hardly get as much attention as the glitzy evening auctions where diamond-clad wrists raise paddles to secure trophy works. But to a well-trained market sleuth, the day sales can be even more revealing than big-time evening affairs. These workmanlike events often see results that foretell whose market is about to take off and give insight into percolating trends (like the return of the 1980s, as you’ll see below). The graphic portraits of women by Patrick Nagel (1945–1984) are a time capsule of the 1980s, imbued with the decade’s sizzle and grit. His subjects appear at once seductive and empowered, usually set against neutral background and flashing some flesh. A Playboy magazine illustrator since 1975, Nagel did commissions for corporate clients like Lucky Strike cigarettes and designed Duran Duran’s number-one hit Rio album cover in 1983. Fascinated with celebrity culture, he counted among his muses actress Joan Collins and model Shannon Tweed, Playboy’s Playmate of the Year in 1982. Untitled at Sotheby’s is the third-highest auction result for the artist, whose $350,000 record was achieved two years ago. Another 1980s work in the sale, Cheetah, fetched $151,200, more than doubling the low estimate of $60,000. Roughly a year after a four-decade retrospective at Greene Naftali, which marked Lasker’s first New York solo show in more than five years, the American painter has seen a resurgence in interest. His paintings, which blend garish color and imprecise lines, first drew attention in the 1980s, but three of his top five auction prices (including the one for this work) have been set this year.

Theories About Exotica, which contains a hive-like brown pattern laid over ragged black stripes and a tangle of green and purple, carried an in-house guarantee; the seller picked it up way back in 1989. (Lots with the same credit line as this one, “Property from a New York Charitable Family Trust,” have been sold at auction over the past 18 months by an entity linked to the real-estate tycoon Jerry Speyer.)

The painting is now the fifth-most-expensive work by the artist at auction, according to the Artnet Price Database. His top price, $145,000, was achieved 14 years ago, in 2008.

“Jonathan Lasker has been steadfast in his decades long investigation of figure ground relationships—using a totally distinct abstract visual vocabulary throughout that time,” said Julian Ehrlich, head of Christie’s Postwar to Present sale. “From the perspective of the market, there is a far greater perception now among collectors of how important his contributions are to a lineage of painting in New York.” It might not be the most expensive lot of Phillips’s New Now sale, but Four Ships by Laurens Legiers (b. 1994), is likely to be one of the most profitable. The consignor acquired it in 2020 when the painting was first shown at Plus-One Gallery in Antwerp. The price was more than six times the high estimate, and it marked the artist’s first entry in the Artnet Price Database. Phillips said the piece—which is directly inspired by the work of Legiers’ fellow Belgian, René Magritte—received bids from collectors in the U.S., Asia, and Europe. “With a rise in popularity of Surrealism, contemporary artists such as Legiers are honoring art-historical roots in contemporary ways,” said Avery Semjen, head of the New Now sale. “People are drawn to his tonal, calming palette and natural subject matter.” Hailing from Brooklyn, the auction newcomer Amanda Baldwin (b. 1984) is gaining traction with her still lifes, which appear flattened and layered like a stage set. The patterned interior scene of Open Window, Pear Table certainly caught the eye of buyers at Phillips’ New Now sale last week, fetching more than three times its estimate. The winning bid came from Asia, according to Phillips, the source of rampant spending on the work of young artists in recent years. Baldwin’s fruity Zeal, Zest, Zing (2018) outperformed its high estimate of HKD $80,000 ($10,191) at Christie’s Hong Kong in May to fetch HKD $138,600 ($17,657).

Atsushi Kaga, The Life of the Kitten with Brown Ears (2022) Atsushi Kaga, The Life of the Kitten with Brown Ears (2022). Courtesy Sotheby’s.

This painting vaulted to more than five times its upper estimate. It was completed earlier this year and consigned directly to auction by the artist and his gallery, the Dublin-based mother’s tankstation, as part of Sotheby’s new Artist’s Choice initiative. The absence of any kind of flipping stigma might help explain why competition drove the price up so high.

“Atsushi Kaga is really having a moment right now,” said Noah Horowitz, who engineered Artist’s Choice, noting that he was “one of the most talked-about artists at the debut of Frieze Seoul last month.” As an artist who is difficult to access on the primary market, Horowitz said Kaga is ideally suited to the program, and “we saw extremely strong interest from collectors in Asia, in particular, with six unique bidders from the region vying for the work.” The Brussels-based painter has rapidly been gaining steam at auction and this farcical apocalyptic scene was no exception, selling for more than eight times its upper estimate at Sotheby’s. Before this year, Willem had nary an auction result to his name, but since May, a whopping nine works have hit the auction block, and every single one has bulldozed its estimate. Five sold for prices in excess of $100,000.

The artist’s bright and playful works have a naive energy that could be explained by the fact that he is self-taught, and has only been painting for about four years. The style has clearly caught on with collectors and dealers; Willem recently secured representation from New York gallery Waterhouse and Dodd.