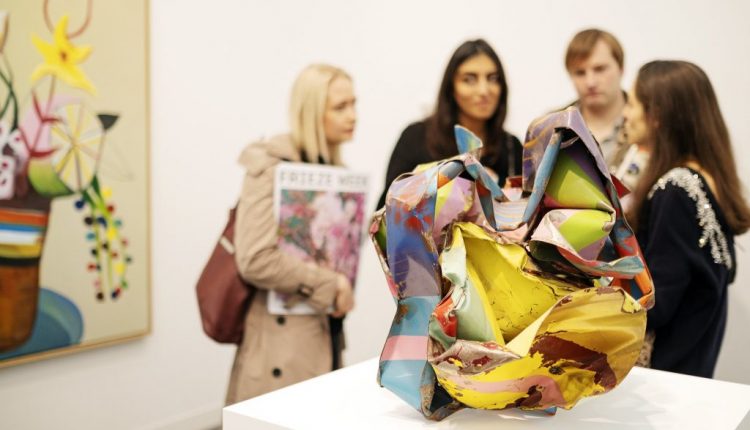 It’s that time of year again: The Frieze Art Fair in London is kicking off next week. To get you up to speed, we’ve rounded up all the details on the marquee event, plus the must-see satellite fairs happening around town.

Read on for the highlights. What: The main event of the week, Frieze London’s 2022 edition will feature more than 160 international contemporary galleries. The main section of the fair will be accompanied by a special Focus section, dedicated to galleries founded within the last 12 years. New this year will be the curated section titled “Indra’s Net,” organized by the Guggenheim Abu Dhabi’s Sandhini Poddar. What: More than 120 galleries from around the world will bring the cream of the crop from the past 6,000 years of artistic production to the other side of Regent’s Park at Frieze Masters. The fair’s Spotlight section, curated by co-founder of AWARE Camille Morineau, will focus on women artists throughout history. Also, check out the Stand Out section, returning for its sophomore year and focusing on the idea of global exchange. What: The free, open-air exhibition is celebrating its 10th year in Regent’s Park, once again curated by Yorkshire Park director Clare Lilley. Colorful, cheeky sculptures from 19 internationally acclaimed artists fill the lush gardens, which are a literal stone’s throw from Frieze’s main tents.

Where: The Regent’s Park, London Installation of work by Lakwena Maciver at 1-54 London 2021 © Jim Winslet.

What: To celebrate its 10th anniversary in London, 1-54 is returning to Somerset House for a four-day stretch featuring 50 international exhibitors representing over 130 artists from 21 countries. Lisbon-based artist Grada Kilomba’s installation O Barco / The Boat will fill the courtyard with 140 blocks stretching 105 feet long in front of the Neoclassical building, and will be accompanied by a series of live performances.

The exterior of PAD Art + Design in London.

After two years of virtual presentations, PAD London is returning IRL with a survey of 20th- and 21st-century design. An international roster of exhibitors will display curated booths in sections including Young Design Talents, Sustainable Design, Craftsmanship: Embracing Heritage and Innovation, and the Art of Jewelry Design. What: Now in its ninth year and on the heels of its debut in Seoul earlier this fall, the upstart event is spotlighting celebrity artists from the K-Wave. Ohnim, also known as Mino of the K-Pop band WINNER; actor and model Kang Hui; actor and writer Shinyang Park; and reality TV star and webtoon artist Kian84 will all have original work on display. Other exhibitors include Mr. Brainwash, the Connor Brothers, and Illuminati Neon.

The Back Room: Out With the Old