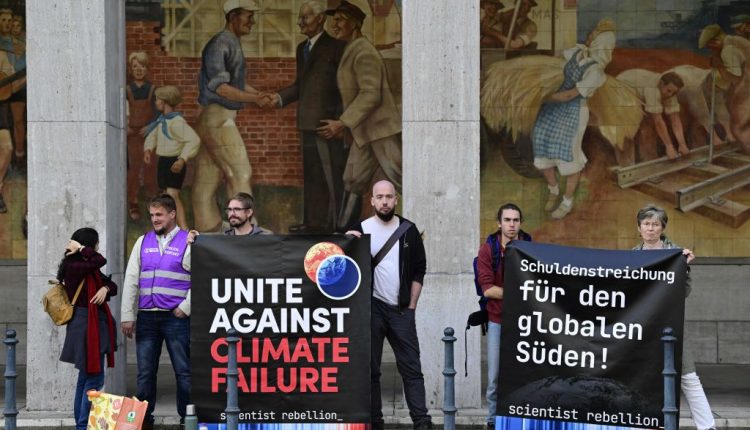 The recent spate of climate protests at museums across Europe have involved cheap tricks that use everyday items like glue, tomato soup and mashed potatoes. But this doesn’t mean they don’t come at a high cost, with some activists in Germany now facing fines.

Just last week mashed potato was thrown at a painting by Claude Monet at the Barberini Museum in Potsdam, an incident which is estimated to cost the museum up to five-figures thanks to necessary repairs to the work’s historical frame and the gallery’s adjacent wall.

Its director Ortrud Westheider has announced that he is considering pursuing a claim against the protestors for damages, according to Monopol Magazin.

The founder of the German museum, Hasso Plattner, has decided to close the institution until October 30 in order to evaluate the efficacy of protections currently in place.

On August 23, two climate activists from the German group Letzte Generation (Last Generation) glued their hands to the frame of Raphael’s Sistine Madonna at the Old Masters Picture Gallery in Dresden. While the picture itself was unharmed, the action left behind traces of glue and damaged the patination of the frame in areas where the hands had rested.

Presumably hoping to recoup these costs, the Dresden State Art Collections (Staatliche Kunstsammlungen Dresden or SKD) has filed a complaint with the city’s public prosecutor’s office, citing “damage to property that is harmful to the community” and has initiated civil proceedings for damages.

The two protesters have also been banned from all 15 of the SKD’s museums.

Despite the risk of receiving a fine, attacks like these show no signs of slowing down.

14 of our brave scientists are still occupying @Autostadt, ready to spend another night.

They demand that the CEO of @Volkswagen, Oliver Blume, talk to them, and immediately advocate for a speed limit of 100 km/h in Germany. #UniteAgainstClimateFailure pic.twitter.com/tDKuNeVrnd

Last week, on October 19, 14 activists from the environmentalist group Scientist Rebellion staged a sit-in protest at Volkswagen’s Autostadt museum in Wolfsburg, gluing themselves to the floor of a Porsche display. The protestors called for a meeting with Volkswagen CEO Oliver Blume and for speed limits of 100 kilometers per hour to be imposed in Germany.

The museum recognized their right to protest so the scientists were not removed by the authorities and instead were left on the premises overnight, only to be cleared from the scene early on Friday morning (October 21). The museum released a statement reporting that the action had resulted in property damage.

“The Autostadt is known as a meeting place for people from all over the world and as a platform for communicative exchange and is always open to factual criticism,”read the statement. “With this basic attitude, we strived for a de-escalation and actively tried to engage in constructive dialogue.”

The museum stated that it had been forced to clear the pavilion when the sitters threatened a hunger strike and their health began to suffer.

On Twitter, Scientist Rebellion stated that “Volkswagen is not keen on too much attention for their climate failure. Quietly, before people arrived at Autostadt, they called in police to remove the peacefully protesting scientists.”

Was a Victorian Illustrator the Godfather of the Graphic Novel? A New Exhibition of Aubrey Beardsley Explores the Question