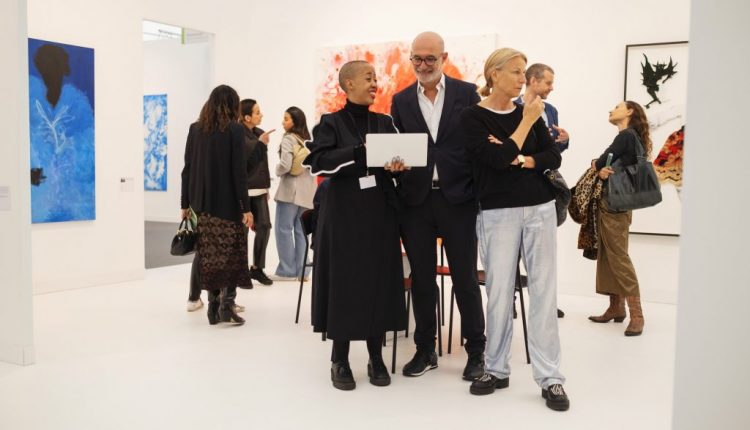 No one does lines like the English. That much was clear as stressed-out security attempted to funnel throngs of jostling international VIPs into an orderly queue to enter Frieze London.

“Everyone here has a VIP pass,” one guide was overheard telling a female collector interested to know if he knew who she was. It was to the back of the line also for MP and ex-chancellor of the exchequer Rishi Sunak, though it remains unclear whether some of the celebrities spotted inside the fair—from a pink-haired Jared Leto to fellow American actor Josh Hartnett, model Claudia Schiffer, and Princess Beatrice of York—had the same deference for the system.

If dealers were concerned whether the excitement surrounding the debut of Paris+ by Art Basel next week would cause some collectors to forego Frieze London in favor of the Swiss-owned French fair, an extremely busy first hour quickly reassured them. There was robust attendance from institutional groups, including the Aspen Art Museum, Centre Pompidou in Paris, and the Sharjah Art Foundation. And while last year’s fair received fewer U.S. collectors due to ongoing travel difficulties caused by the pandemic, this year there were definitely more—Lonti Ebers and Pamela Joyner notably among them. The Americans were encouraged, no doubt, by the strong position of the dollar related to the pound and the euro right now, as well as the fair’s newfound proximity in date to the Paris fair, making it possible to do the two events back to back.

“If you’re American, it’s a great time to buy in pounds, so I think there’s a great shift towards coming to London; everything is a little bit cheaper, everything is better value for money,” Hauser and Wirth’s Neil Wenman told Artnet News. Ahead of the fair, many dealers were joking that they had better put their prices in USD to avoid taking a ding, although most dealers (including Hauser and Wirth) actually price works in the local currency of the artist.

And while there was a certain lack of enthusiasm before the fair from many Europeans about heading to London post-Brexit, collectors such as Belgian Alain Servais showed up in the end.

On the dealer side, David Zwirner, who caused a stir at FIAC in Paris last year, with a blistering verdict on sales back then, was upbeat about the London fair. “Business here has been great, I would almost say surprisingly strong given that there’s all kinds of headwinds in the world right now,” Zwirner told Artnet News, adding that the gallery had been able to place expensive works with collectors. “I think what happens when things slow down is people are more discerning and really smart collectors realize there’s opportunity and step up. I feel like we’re in that cycle. It feels good.”

By mid-afternoon, Zwirner had reported the sale of a $6 million Kerry James Marshall work to a major U.S. museum, a Carol Bove work for $500,000 and two paintings by Oscar Murillo for $400,000, among others. Zwirner said he was looking forward to Frieze and Paris+ developing a harmony within their back-to-back programming over the next few years, and he didn’t stop before delivering a final withering blow to FIAC, saying: “It will be hard for us to remember FIAC once we’re done with Paris+ next week.”

As art events flood back into the calendar, it seems that London has found a defining focus in its offerings in the ultra-contemporary sector, with many galleries choosing to showcase their young artists who are notoriously difficult to access on the primary market. A suite of large-scale paintings by Jadé Fadojutimi, who is currently enjoying a solo exhibition at the Hepworth Wakefield, adorned the walls of Gagosian’s sold-out booth. Artnet News understands the works were priced at £500,000 each, though the gallery does not disclose prices.

Another work by Fadojutimi was present on the booth of Gisela Capitán, who continues to represent her, alongside Taka Ishii gallery, priced at £800,000; a sale was awaiting confirmation in the early moments of the fair.

Elsewhere, there was buzz around Louise Giovanelli at White Cube and Grimm Gallery; by the day’s end, White Cube reported selling two works by the artist for £25,000 and £20,000. Also popular was work by the Ireland-based Japanese artist Atsushi Kaga at mother’s tankstation, which found success with the artist in Sotheby’s Artist’s Choice initiative a couple of weeks ago. Olivia Davis, founder of the Art of Choice advisory, noted that recent fluctuations in exchange rates were unlikely to affect sales in this segment of the market, as a lot of people were traveling to London specifically to be physically present to get their names on the interest list for these young artists. “People want to buy them regardless of what that exchange might be because obviously at auction the prices soar through the roof and anything that you can get at a primary market level—regardless of whether it’s in USD or GBP—is kind of a steal,” Davis said. “It’s a no brainer.”

The choice of material wasn’t the only way the Wild West of the growing global auction market seemed to be impacting business at the fair. When asked about sales, Hauser and Wirth’s Neil Wenman said the gallery has now adopted a different approach, with the days of “first come, first served” over.

“What we’ve got to think about is the artist and placing the work best. So in many scenarios, we have five to 10 people who have said they will buy it, but we’re trying to make sure it goes to the best place for the artist,” Wenman said. “Those conversations on the first day are all ongoing.” The gallerist added that they wanted to slow down in order to be more protective of artists. “The market is so fast and people are so keen and so excited to get involved,” he said. Still by the end of the day the gallery had placed 15 works, including a $4.8 million Philip Guston abstract to a European collector, a $1.2 million work by Hans Arp, and a $900,000 piece by George Condo.

Lionel Ritche bought work by Calida Rawles at Lehmann Maupin, which also sold two paintings by Cecilia Vicuña—priced between $80,000 and $110,000. Pace Gallery reported sales including an on-the-booth closer on a $450,000 Kenneth Noland painting with an American collector, and a $70,000 painting by new gallery artist Kylie Manning to a European. And the good news trickled down to the emerging scale too; Paris gallery Edouard Montassut sold work by Hélène Fauquet, priced between €6,000 and €10,000, and Athens gallery Hot Wheels sold three works for €5,000 each by Maria Xenofotos, who has just won the Camden Art Prize.

While the sales reports tumbled in thick and fast, they were rarely in the multi-million-dollar range, and the inaugural Paris+ fair was a buzzy topic among attendees, who were comparing notes on previews. (The takeaway being that the standard in Paris will likely be higher than what’s on offer in London.)

That said, not everyone was dusting off their berets. Valeria Napoleone, an ex-Londoner who now lives in New York, said that she was too exhausted to hop on the Eurostar after a busy week of reconnecting with friends in the U.K. Still, consensus among dealers and advisors seemed to be that the extra trip would be worth it. Artnet News will be en route next week so we suppose, on verra!

Spotlight: The Group Exhibition ‘Sensitive Content’ Focuses on the Past and Future of Censorship in Art