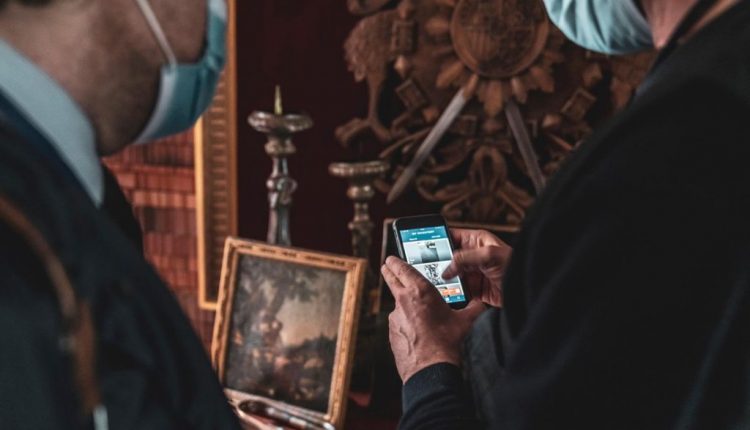 The FBI’s Art Crime Team, for example, which employs 20 special agents throughout the U.S., boasts of having retrieved more than 15,000 objects, valued at over $800 million, since it was established in 2004.

Now, authorities are getting a little bit of help from developments in technology.

That’s because fraudsters are known for being technologically advanced. Last year, for example, hackers infiltrated emails between venerable English dealer Simon C. Dickinson and the Netherlands’ Rijksmuseum Twenthe, making off with $3.1 million.

So museums, collectors, police and security forces have to keep up. These days, they’re employing advances like liquid fingerprinting nanotechnology and tiny rare-earth magnets—as well as futuristic tech that’s a little easier to take for granted—to persuade thieves and looters to leave art where it is, or to recover stolen items before they disappear for good.

We surveyed the burgeoning field to get an idea of what tools crimestoppers are getting their hands on next. If you came here to read up on the latest tech, we know what you really want to learn about: blockchain.

While the experts interviewed for this article said the nascent technology shows promise, especially for authenticating digital artworks, they agree it’s not very useful for identifying paintings misappropriated by Nazis, or preventing stolen Syrian vases from showing up at an auction house.

“It is extremely difficult for us to see it as a solution,” says Will Korner of the Art Loss Register, which maintains a database of 700,000 stolen artworks and collectibles that auctioneers, art fairs, museums, pawnbrokers, and others use to avoid handling stolen art.

“For the vast majority of stolen artworks, for example Nazi-looted material, the provenance is a mixture of conjecture and, quite often, lies,” he said. “So you put it in a blockchain? That doesn’t help.”

What’s more, the fast-moving nature of the industry is worrisome. What if you put good information in a blockchain and, in a few years, the blockchain provider isn’t in business anymore?

Skeptical though Korner is, he acknowledged that blockchain technology could prove useful in foiling the type of fraudster who sells more than 100 percent worth of shares in artworks, as the notorious Inigo Philbrick is alleged to have done. When the late U.S. secretary of defense Donald Rumsfeld deigned to comment on the epic plunder of Iraqi museums in the wake of the 2003 U.S. invasion, it was to minimize the television coverage.

“It’s the same picture of some person walking out of some building with a vase and you see it 20 times,” he said at a press conference. “Is it possible that there were that many vases in the whole country?” (Spoiler: yes.)

The English company SmartWater, which provides security services to various companies and historic sites, aims to atone for the allies’ sins by safeguarding Iraqi museums’ holdings in a collaboration with the University of Reading, the Iraq State Board of Antiquities, and Heritage and the Slemani Museum in Iraqi Kurdistan.

SmartWater has developed harmless, invisible, and traceable liquids that can be applied to an object and that show under ultraviolet light. The liquids can be coded with enough data that it can give highly detailed information about the source of the stolen goods.

C.E.O. Phil Cleary conceived of the technology when he was dismayed that plaques on WWI memorials throughout England were being stolen for their valuable metals. Some of them are among the only physical records of those soldiers’ sacrifice, he said in an interview.

Now, the company is donating its materials and services in an effort to protect museum collections in Iraq. Nearly 300,000 artifacts in Baghdad’s Iraq Museum and the Slemani Museum in Sulaimani have been treated with the liquid.

Museum staffers have been trained in how to apply the solution, and signs outside the museums warn would-be thieves that the treasures are now traceable. With possible further funding from the English government, the project may expand to more Middle Eastern museums. Auction houses, oligarchs, and galleries, from MoMA to Sotheby’s to Gagosian, use the services of the New York asset-protection firm Art Guard. Key to those services, founder and partner Bill Anderson said, is a blend of various kinds of technology and protective measures, since no one system provides total protection. For example, perimeter security at your estate isn’t useful during the day, when people are coming in and out.

Anderson is also fond of puncturing what he calls the myth of GPS for tracing stolen treasures. “In order to have a beacon that is continually sending, you’ve got to have a lot of battery, and that causes the device to be so big, it will be obvious, and thieves will rip it off,” he says. “Sure, someone can tell where I am with my phone, but people forget that over half of the phone is the battery.”

Anderson claims to have a leg up on other companies offering art security because of his tiny, rare-earth magnets, which are so small as to be undetectable and can even be threaded into the fabric of a tapestry.

“We are a preferred vendor of [the insurance company] Chubb, which is offering some concession on policies for art protection,” if Anderson’s products are in use, he told Artnet News. “It makes sense because it mitigates the risk.” Three months ago, Interpol released a free ID-Art app allowing any institution or collector (even you!) to create an inventory of their collections in case of theft.

Collectors can use it to search Interpol’s database of 52,000 stolen artworks to ensure that an object they’re buying isn’t stolen. They can even do the search with just a photo—image recognition software will do the rest. Any searches a collector has done can be used later, should an item she buys turn out to have been stolen, to prove due diligence.

What’s more, said Catesi Corrado, the coordinator of Interpol’s art theft team, everyday people can employ the app to help protect cultural sites that have been hit with natural disasters and are vulnerable to looting in the aftermath by quickly creating even a rough-and-ready inventory. The app has already led to the recovery of several stolen artworks, Catesi said.

Stressing that buying looted antiquities, even for just a few dollars, can go a long way to funding terrorism in the aggregate, he urged any concerned collector or dealer to start using the app.

Powell Says Fed Could Start Scaling Back Stimulus This Year

‘I Want to Get People’s Attention’: Artist Adam Pendleton on Taking Over MoMA’s…