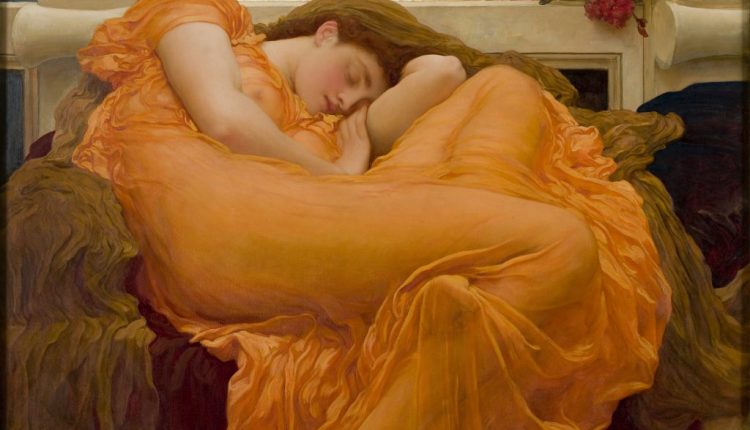 Flaming June is a painting that blooms orange.

A young woman with sunkissed cheeks and long auburn hair is curled in sleep, her sheer Grecian dress fanned out and filling the canvas with a tangerine hue. She dozes on a marble terrace, a gold awning above her shading her only slightly. Behind her the turquoise waters of the Mediterranean Sea glitter. An island can be seen, faintly visible in the distance.

Painted by Frederic Leighton, Flaming June (1895) is today regarded as the artist’s unequivocal masterpiece, and the painting, which has been in the collection of the Museo de Arte de Ponce in Puerto Rico since the 1960s, is affectionately known by many as the “Mona Lisa of the Southern Hemisphere.”

But the now-treasured work lived, for many decades, in total obscurity. Leighton, who was the president of the Royal Academy of Arts, had painted Flaming June along with five other works for the academy’s summer exhibition of 1895. While the painting didn’t inspire any particular critical fervor upon its debut, it was immediately purchased by the weekly illustrated newspaper The Graphic, which issued high-quality reproductions of the painting in its 1895 Christmas edition, popularizing the painting in Britain. Several years later, in the early 1900s, the painting was loaned to Oxford’s Ashmolean Museum. After that, however, the whereabouts of this luminous painting go dark for decades. Only at the dawn of the 1960s was the painting rediscovered, found boxed in over a chimney in a home in Battersea, England.

In those years, Victorian art had fallen totally out of vogue, and the painting struggled to find a buyer. That was until Puerto Rican industrialist and politician Luis A. Ferré encountered the work on a trip through Europe in 1963, purchasing it outright for the Museo de Arte de Ponce, where it has enjoyed a renaissance of appreciation over the intervening decades and come to be celebrated as a luminous testament of the artist’s unique interpretation of Greek and Latin antiquity.

Now, the painting will soon be unveiled at the Metropolitan Museum of Art, along with four additional works from the Museo de Arte de Ponce while the Puerto Rican museum undergoes repairs and renovations due to past earthquake damage. The painting spurred enthusiasm while traveling abroad in the past; Flaming June drew crowds to the Museo del Prado in 2008, the Staatsgalerie Stuttgart in 2009, and the Frick Collection in 2015.

Ahead of its arrival at the Met on October 8, we decided to take a closer look at this radiant image of slumber. Here are three fascinating facts that may just make you see this image in a more nuanced way.

Images of Sleeping Women Resisted the Push for Productivity Frederic Leighton, The Garden of the Hesperides (1892). Collection of the National Museums Liverpool.

Leighton was a proponent of the Aesthetic Art movement, a 19th-century style that eschewed Victorian fussiness and rigidity, aiming to create a beauty freed of morality. The movement extended beyond painting to the worlds of music, literature, and fashion, and cultivated an ethos of “art for art’s sake” that anticipates many 20th-century art movements. In keeping with the ideals of Aestheticism, Flaming June does not reference myth or religion nor possess any discernible narrative significance—though the vision of a slumbering woman set in a vaguely archaic past was a common motif in Victorian art, and one that Leighton himself returned to, in such paintings as The Garden of Hesperides. The artist originally intended the figure from Flaming June for another work, Summer Slumber, and preparatory drawings show that he spent some time configuring the woman’s figure.

Accounts of real-life medical cases of protracted sleep became quite popular in the Victorian age; these included the case of Ellen Sadler, a British girl who became known as the ​​Sleeping Girl of Turville, who supposedly fell asleep at the age of 11 and did not wake for nine years. She became a tourist attraction in her time, earning her village a fair bit of money. Such stories touch on histories of the Sleeping Beauty fairy tale, as well as the myth of Persephone, but also speak to an overarching interest in rest and resistance against consumerism during the rise of the Industrial era.

The Model Was Likely the Stage Actress Dorothy Dene The woman who is widely believed to have inspired Flaming June was Dorothy Dene, a friend and frequent model for Leighton. Born Ada Pullen, Dene was 19 years old when she met the 50-year-old artist. Pullen was the daughter of an impoverished engineer who worked as a model to support her family. Under Leighton’s guidance, Pullen changed her name to Dorothy Dene as an actress. In fact, it is believed that George Bernard Shaw based his play Pygmalion on the relationship between Dene and Leighton. Over the course of more than 17 years, Dene became his most frequent model, and the artist encouraged his colleagues, including John Everett Millais, to use her as a model. She appeared in numerous paintings, including The Bath of Psyche (1890), Cymon and Iphigenia (1884), and The Jealousy of Simoetha the Sorceress (1887). The pair came from vastly different worlds and maintained separate but nearby homes, but letters seem to suggest that, at least in continental Europe, Dene was known among fellow artists as Leighton’s wife. When the artist died, he left Dene £5,000 and £5,000 in a trust for her family (a sum bordering £1 million in today’s money).

The Vibrant Canvas Was Leighton’s Last Michelangelo’s Night (1526–31) on the tomb of Guiliano Medici in the Basilica di San Lorenzo in Florence, Italy.

Leighton is known to have admired Michelangelo’s sculpture Night, which appears on the tomb of Giuliano Medici at the church of San Lorenzo in Florence. With the uncommon pose of a nude female shown with a knee prominently curled before her, the sculpture has frequently been cited as a source of inspiration for Flaming June. Indeed, Leighton’s preparatory drawings show the artist reconfiguring the model’s pose through a variety of positions relating to Michelangelo’s sculpture; however, the sculpture’s funerary function also offers insights into Leighton’s painting. During the Victorian era, images of death and sleep were often symbolically and aesthetically intertwined. For all its radiance, Flaming June’s vitality is subtly belied by the presence of oleander growing on the terrace, a poisonous plant often associated with death. Indeed, an existential theme may have had personal significance to Leighton, who was nearing the end of his life, and yet whose brushwork betrays no sign of deterioration. Flaming June would be the last full-scale painting Leighton completed. When he died in January 1896, The Graphic magazine placed the painting in their office window, which was visible as the artist’s funeral procession passed by.

More Than 2,500 Archaeologists Have United to Demand the British Museum Return the Rosetta Stone to Egypt