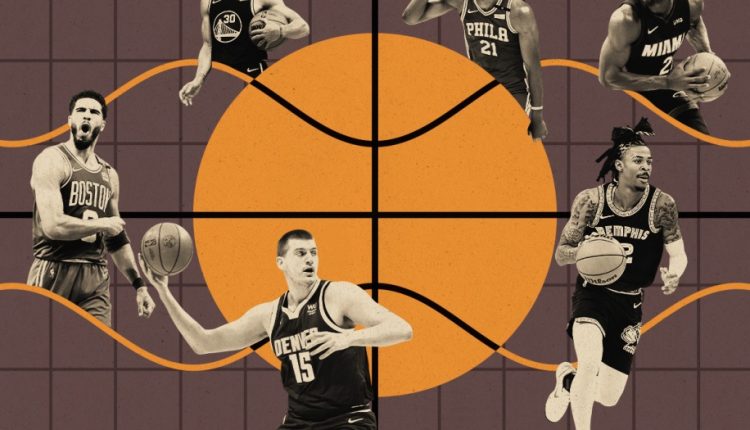 When the 2022-23 NBA season begins next week, our RAPTOR prediction model sees a league with a field of title contenders more wide-open than at any time in recent history.

Philadelphia 76ers president Daryl Morey famously once said that any team with at least a 5 percent chance of winning the championship should be all-in to try to take advantage of that opportunity. Such teams are usually rare: From 2015-16 through 2021-22, our preseason forecast included, on average, 5.4 (and at most eight) teams with championship odds of 5 percent or better.

This year, however, there are 11(!) teams in that category: the defending champion Golden State Warriors, the reigning Eastern Conference champion Boston Celtics and (in alphabetical order) the Atlanta Hawks, Dallas Mavericks, Denver Nuggets, Memphis Grizzlies, Miami Heat, Milwaukee Bucks, Philadelphia 76ers, Phoenix Suns and Toronto Raptors. It’s also worth noting that the Celtics, who emerge as the favorite here, are tied with the 2020-21 Lakers for the lowest title odds (21 percent) of any preseason favorite since the forecast began in 2015-16.

In five of the previous seven seasons, the eventual title winner came from the group of teams with 5 percent odds or better, so there’s a decent chance we will be crowning one of those aforementioned squads next June — though that doesn’t narrow things down very much. In the meantime, let’s take a look at how we see the standings shaking out in each conference. We’ll begin with the West, home of the defending champs.

Golden State fares much better in this year’s forecast than it did a year ago, when it was rather infamously predicted to miss the playoffs altogether. Much of the expected improvement (relative to last year’s forecast, at least) is due to Stephen Curry’s continued excellence (he’s projected for the sixth-best total RAPTOR in the league this season), but we can also attribute some to Andrew Wiggins’s improvement, Klay Thompson’s better-than-could-have-reasonably-been-expected return from two major injuries and the emergence of Jordan Poole as a sixth starter-quality (or better) player. The Warriors’ regular-season projection is dragged down a bit by the poor ratings of James Wiseman and Jonathan Kuminga, both of whom are projected to be fixtures in the Warriors’ rotation. (I’m personally higher than our player projections are on Kuminga.)

The forecast foresees a changing of the guard at the top of the conference as well, with the Nuggets, Grizzlies and Mavericks projecting as the only teams with 50-plus wins. The Suns and Jazz, routinely at the top of the standings the past few seasons, have each moved down for different reasons.

Denver’s projection is, of course, powered by Nikola Jokić, who is projected to once again lead the league in total RAPTOR — by a lot. The distance between Jokić and Luka Dončić in second place is greater than the distance between Dončić and the projected seventh-place player, Jimmy Butler. The Nuggets’ projection also greatly benefits from the returns of Jamal Murray and Michael Porter Jr., as well as more minutes for Bones Hyland and the offseason addition of Bruce Brown (FROM? The U!).

The Grizzlies have a league-high 10 rotation players projected as net-positives in total RAPTOR (though one of those is Danny Green, who may not play at all this season). Even without him, though, there’s a decent chance that the Grizz do not give rotation minutes to a single player who projects as a net-negative. That’s a powerful advantage, at least during the regular season. For Dallas, Dončić projects nearly as well on offense as does Jokić, which is more than enough to carry a supporting cast full of players who project somewhere between minus-0.5 and plus-1.4 in total RAPTOR. Dončić’s closest comparables for this season include 2003 Tracy McGrady, 2009 LeBron James and 2002 Kobe Bryant, among others. That is … lofty company to keep.

The Suns take a bit of a dip in this year’s forecast, though some of that could be made up with a potential Jae Crowder trade. (Right now, we are projecting him outside of the rotation with no real replacement and the minutes being redistributed among players like Landry Shamet, Cameron Payne, Timothé Luwawu-Cabarrot, Josh Okogie and Damion Lee.) Phoenix still projects to have one of the NBA’s best starting fives, but the bench appears a bit lacking right now — even with the return of Dario Šarić.

RAPTOR foresees the Timberwolves leaping out of the play-in to grab the No. 6 seed, though even the trade for Rudy Gobert did not get them into the group of teams with 5-percent title odds or better. Also not among that group are the L.A. Clippers — even after we made a change to the minutes projection for Kawhi Leonard.1 Both the Clippers and Pelicans figure to benefit from the new way we are projecting minutes on a game-to-game basis this season, but those effects will not be seen until games actually start being played. (New Orleans will also benefit from Zion Williamson actually playing and presumably producing at a high level, which will quickly improve his rest-of-season projection.)

Next, we should note that RAPTOR cannot exactly predict the degree to which a team will attempt to tank this season. That’s why it foresees the Jazz as a play-in team despite their rather obvious intention to tumble in the standings. Players like Mike Conley, Jordan Clarkson, Lauri Markkanen, Jarred Vanderbilt and Kelly Olynyk still project to perform fairly well and to play significant minutes. RAPTOR can’t factor in the likelihood of some of those players, ya know, not being on the team at some point. If and when any of them are dealt, that will be accounted for.

And then we come to the Los Angeles Lakers, who along with the Sacramento Kings are projected to finish several games back of play-in territory.2 Last season, our preseason Lakers projection caused a lot of consternation — and was pretty much vindicated by how the season played out. This year, the forecast sees basically the same thing happening. LeBron James and Anthony Davis are simply not enough to carry a roster filled with negative players, some of whom are significant drags on the team’s projection. James and Davis are also projected for slightly worse RAPTOR outputs this year than in previous seasons due to age (James) and chronic injury risk (Davis). If L.A. manages to trade Russell Westbrook and replace him with on-court positives, it could see a major bump. However, that scenario seems less and less likely at this point.

Now let’s move over to the East, where Boston is the favorite — with a big caveat. RAPTOR does not contain a coaching adjustment, so there is no way for it to factor in the absence of Ime Udoka, who was suspended by the Celtics for a year after violating team policy by having an intimate relationship with a female member of the franchise’s staff. Udoka had a significant impact on Boston’s performance last season, particularly on defense, where his decision to turn Robert Williams III into a roving help defender transformed the team into one of the best defensive units in recent memory. It remains to be seen how interim coach Joe Mazzulla will fare in Udoka’s stead, but all RAPTOR can account for here is the quality of Boston’s roster, which was evident throughout last season and is even better now after the addition of Malcolm Brogdon.

After Boston, the model sees a group of five teams of roughly similar quality in the Hawks, Heat, 76ers, Raptors and Bucks. All boast championship odds between 5 and 7 percent and are projected for between 49 and 51 wins with point differentials between plus-3.0 and plus-3.8 per game. Both Atlanta and Milwaukee will get boosts from the eventual full-strength returns of Bogdan Bogdanović and Khris Middleton, and Atlanta benefited tremendously from the way we switched rotation settings this season to more accurately reflect the number of players used on any given night.3 Toronto also benefited from our rotation boost, with more minutes going to Fred VanVleet, Pascal Siakam, OG Anunoby and Scottie Barnes.

RAPTOR foresees a significant drop-off from that group of five teams to the East’s four play-in squads, as well as from the play-in group to the also-rans. The biggest surprise (to me, at least) is the Hornets, who are projected to finish above .500 even after accounting for LaMelo Ball’s ankle sprain. We’re projecting a return to full strength for Ball by early November, and his offensive projection is so strong that it, along with that of Terry Rozier, carries Charlotte to a better-than-expected projected record.

The Cavaliers, like the Timberwolves, are projected to see improvement this season but not join the group of title contenders despite trading for a star (in their case, Donovan Mitchell). Some of that is because projection systems tend to bake in regression for teams that show as much year-to-year improvement as Cleveland did last season, and some of it is due to a shockingly low projection for Evan Mobley, whom RAPTOR pegs as a net-neutral this season. In the likely event (to me, at least) that Mobley’s projection ends up being too pessimistic, Cleveland’s odds will certainly improve.

Brooklyn’s 45-win projection seems destined to be either way too high or way too low — we just don’t know which direction it will go yet. Do Kevin Durant, Kyrie Irving and Ben Simmons actually take the court all season? If so, the Nets are too good to be just a 45-win team. If not, well, the floor might be bottomless. Our final play-in team is the New York Knicks, who leapfrog past the Chicago Bulls thanks to: a) The as-yet-undetermined-length-of-time absence of Lonzo Ball; b) The addition of Jalen Brunson; and c) Our shortening of New York’s rotation, which kept Immanuel Quickley, Quentin Grimes and Isaiah Hartenstein from receiving far too little projected playing time.

Finally, we have to talk about the race for the bottom of the standings in both conferences, which is sure to be impacted by the Tank-O-Rama for Victor Wembanyama. RAPTOR sees the worst teams as very much the same ones from last season, with Houston, Detroit, Oklahoma City and Orlando projecting for the four worst records in the league. The Rockets project far worse than the others at the moment, largely due to the sheer volume of youth in the rotation — players who tend to take a while to improve and become positive forces. Teams like the Jazz, Spurs, Pacers and more could join this group in the Wembanyama (and Scoot Henderson) sweepstakes at some point during the season, but for now they have better projections due to the quality and volume of their veteran talent.