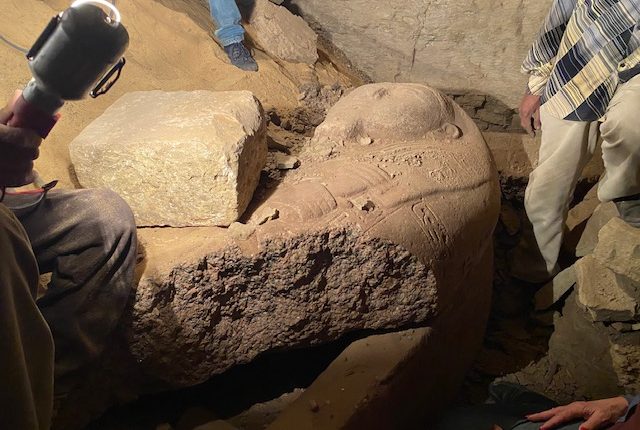 El Aguizy is a professor emerita of Egyptian language in the archaeology department at Cairo University, just 20 miles north of Saqqara. She started digging at the royal burial grounds in 2005, and discovered the surface-level remnants of Ptah-em-wia’s tomb more than 15 years later, in May 2021. Recently, her team noticed the opening of a vertical shaft at the site—a dead giveaway for a burial chamber below.

It took them a full week to dig out the shaft using just “a bucket attached to a hand-operated rope winch,” according to the Guardian. Then, 70-year-old El Aguizy descended in her own bucket to the chasm’s bottom, where she found a sarcophagus mostly intact.

“The lid had been broken and the mummy was missing, but the broken piece was found left behind,” El Aguizy told Artnet News. “All these tombs have been looted—that is why many fragments of the walls of these tombs are found in museums around the world.” El Aguizy underground during the dig.

The sarcophagus, El Aguizy told the Guardian, belonged to the tomb’s owner, which is not always the case. “Sometimes the sarcophagus is for a different person,” she said, “when the tomb was used in later periods.”

And although the mummy was missing, academics don’t really need a body to gain valuable insight into Egyptian history. In this case, the site’s inscriptions are of more interest, as Ptah-em-wia’s tomb was carved with emblems of the sky goddess Nut, and describes Ptah-em-wia’s closeness to King Ramses II.

Ptah-em-wia once managed Egypt’s royal treasury, along with cattle and offerings to all of Egypt’s gods, El Aguizy told Artnet. “I focus my energy on such discoveries because they are very important,” El Aguizy said. “Archaeologists around the world are interested to see the results of these excavations.”

El Aguizy’s team will continue studying the inscriptions, and the veteran archaeologist also noted that the style of this tomb differs from others in the area. She’d like to know why.

In the meantime, National Geographic caught El Aguizy’s historic discovery on film. Keep your eyes peeled for their coverage of her dig on an upcoming episode of the television series Lost Treasures, and feel like part of the find.