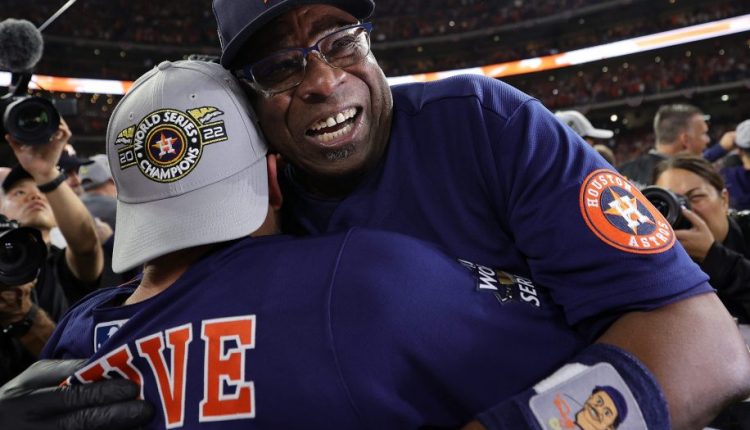 Among the many memorable moments made after the Houston Astros clinched the World Series over the Philadelphia Phillies Saturday night, perhaps the most indelible of all was seeing the team’s players spontaneously mob beloved manager Dusty Baker in the dugout, chanting his name:

On Saturday morning, Baker woke up as the winningest manager in MLB history without a title; by nighttime, he was in a different club entirely.

“This is the greatest bunch of guys,” Baker said after the game. “They told me in spring training they were going to win.”

And his team certainly delivered. With an 11-2 record in the postseason, the 2022 Astros tied the 1998 New York Yankees — arguably the greatest team in MLB history — for the third-best playoff winning percentage by any champion in the division-series era (since 1995), in addition to compiling the third-most games over .500 (plus-9) by any team in the playoffs ever:

The National League champion Baker’s Astros vanquished, the Phillies, were an interesting adversary with a unique build and a Cinderella backstory. But despite it being a postseason of underdog victories, the ultimate winner was the best and most deserving team — the one that simply had too many weapons for Philadelphia to counteract.

Front and center in that effort was Houston’s pitching staff. Early in the Fall Classic, the Phillies offense had lived up to its dangerous pre-series billing — roaring back from down 5-0 to win in extra innings of Game 1 and, following a Game 2 loss, putting on a 7-0 offensive clinic at home in Game 3. Through that contest, Philly was averaging a scorching 5.14 runs per game in the postseason, while Houston pitchers had 4.67 ERA in the World Series (compared with 3.00 for the Phillies’ staff). Philadelphia had a 57 percent chance of winning the championship, and its lineup of homer-happy bats was leading the way.

And then, everything changed. Starting with Game 4 — which saw a quartet of Houston hurlers throw just the second no-hitter in World Series history — the Astros’ ERA dipped to 1.00 over the remainder of the series, as Philadelphia’s once-mighty sluggers saw their OPS fall from .738 to .403. Aside from Kyle Schwarber, no Phillie mustered an OPS over .667 after Game 3, and the team that averaged two home runs per game early in the series only hit two in total over the final three contests (both coming from the bat of Schwarber). Starters Cristian Javier, Justin Verlander and Framber Valdez combined with a lights-out bullpen (which allowed only two earned runs all series long) to completely short-circuit what had been Philadelphia’s winning formula.

The Astros showcased their deep reserve of big-time contributors in other ways, too. Rookie shortstop Jeremy Peña capped off one of the greatest postseason breakout performances ever (he had a 1.005 OPS in the playoffs) by winning World Series MVP honors. Outfielder Chas McCormick made one of the great all-time World Series catches to preserve a victory in Game 5, leaping at the wall to deny J.T. Realmuto in spectacular fashion. And of course, towering lefty slugger Yordan Álvarez offered the jolt Houston needed to win the clincher, crushing a 450-foot blast to a seemingly inaccessible area high above the center field fence, putting the Astros up for good. (For the game’s most versatile slugger, it was poetic that the homer came off Phillies lefty Jose Alvarado — Álvarez hit 22 points higher against lefties than righties this season, maintaining a blistering .998 OPS against same-side pitchers.)

The Astros are so good top-to-bottom that Phillies co-ace Zack Wheeler could be dealing most of the night — breaking a Mariano Rivera-esque number of bats — but still get undone by the slightest of mistakes: A hit-by-pitch against bottom-of-the-order catcher Martín Maldonado ultimately led to Wheeler’s departure and Álvarez eventually performing his heroics. The rest was history.

For Houston, there will be plenty of meanings to unpack in this victory. Like it or not, as far as referendums go on the post-scandal version of this franchise, it’s hard to do better than rebutting the “they only won because they cheated” crowd with a dominating championship run. Maybe that wasn’t necessary — only five of the 45 players who appeared with Houston this regular season had joined the club in 2017 or earlier — but it can’t hurt the legacies of Alex Bregman, José Altuve and company, either.

And of course, there will be the impact on Baker’s own legacy as one of the game’s greatest managers. He stepped in and helped stabilize the Astros at the peak of the cheating fallout, and he offered credibility when the franchise sorely needed it. As much as anything else, this championship was about adding the missing piece to Baker’s already impressive resume.

As for what’s next? The Astros are not a particularly young team — they ranked 24th-youngest in average age as weighted by wins above replacement1 — but they do have a core of stars who are either in their primes or not yet there (as led by Álvarez and Peña). Houston will continue to be a force in the American League for a while to come. And that is especially true if Baker — whose contract status for 2023 is somehow not fully nailed down yet — returns to the helm.

And as Baker told the FOX broadcast crew after the game: “I always said if I won one, I wanna win two.”

For a team that has made so many deep playoff runs recently, and just capped off another championship, don’t bet against it.

Inside the global hack-for-hire industry