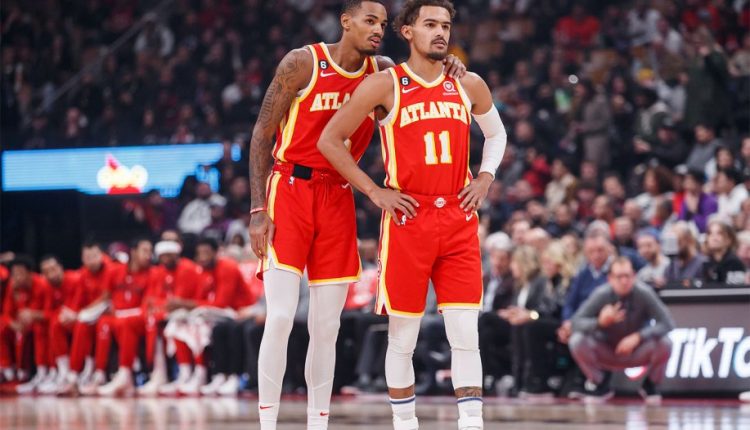 Atlanta Hawks guard Trae Young has blossomed into one of the NBA’s best playmakers since his pro debut in 2018. Last season, the two-time All-Star further elevated his game by joining Nate “Tiny” Archibald as the only players to lead the NBA in total points and assists over a single season.

But it’s clear that Young also needs help. As if this fact needed proving, Young and his teammates ran out of gas during their first-round playoff series against the top-seeded Miami Heat last spring, during which Young attempted 21 more contested shots than any other Hawk.

That’s where the offseason acquisition of All-Star guard Dejounte Murray comes in.

Atlanta is hoping Murray’s presence can help ease life for its franchise centerpiece this season, as well as fill in some of the missing elements of Young’s game. As the Hawks have started the season 5-3, Murray’s early returns — which include a career-high 36-point game against the New York Knicks Wednesday night — are showing many signs of promise.

Young has certainly proved he can take on a huge volume of plays with the ball in his hands. Over the past two seasons, he trails only Nikola Jokić and Luka Dončić in total touches, per Second Spectrum. And that’s generally been a good thing for Atlanta’s offense. Despite using 25 different starting lineups last season — the team’s most since 2012-13 — Young was a constant: His presence on the court swung the team’s offensive efficiency by double digits during the regular season, from a figure that would have led the league (117.2 points per 100 possessions) with Young in the game to a number that would be bottom-5 leaguewide (107.2) when he sat on the bench.

The playoffs, however, proved it is possible to have too much of a good thing. Against Miami, the Hawks’ offensive game plan seemed to simply be asking Young to produce everything himself — his rates of ballhandling and shot creation far outpaced those of his closest teammates:

Atlanta’s offense suffered as a result, with a paltry 104.1 points per 100 possessions in the playoffs overall, and 100.0 with Young on the court specifically. It’s not hard to see why, since Young’s individual numbers — 15.4 points and 6.0 assists per game, a 37.0 effective field-goal percentage  — were well below his usual norms as well.

Something needed to change. With Murray now in the rotation, Hawks head coach Nate McMillan can become more creative on offense with his All-NBA guard, rethinking how Young’s game might fit in among the rest of the team’s roster.

For one thing, Murray shares some overlapping skills with Young. In the previous two seasons, Murray ranked 14th in total touches while Young ranked third. And last season, Young led all ballhandlers with 3,732 picks used while Murray finished sixth on the same list (with a career-high 2,617). Having both playmakers run the same offense should theoretically free up starting bigs Clint Capela and John Collins for cleaner looks near the rim. (And Atlanta was already trailing only the Golden State Warriors in uncontested makes from the restricted area in the previous two seasons.)

But the true mark of Murray’s impact will be his production when Young doesn’t have the ball — or isn’t even on the court. And on the flip side of things, we already can see that Young has been modifying his game when he plays next to Murray:

“Yeah, I mean, I also led the league in points last year, too” Young quipped after being asked about adjusting to shared playmaking duties. “I can score the ball, too. I know how to score the ball, so it’s gonna be times where I can focus strictly on scoring, and that’s fun. I’ve had to do both for a long time — trying to get everybody involved as well as score, too.

“I mean, it’s gonna be pick your poison, so I’m looking forward to it.”

As anyone who has watched the Hawks can tell you, Young tends to do some of his best work far away from the basket. Since his pro debut four years ago, he ranks eighth among all players in total 3-pointers made (730). But one area he has seldom explored is getting shots without the ball in his hands — he ranks only 243rd in catch-and-shoot makes (87) over the same span. Transitioning away from such a ball-dominant approach in shot creation could open up a key area of improvement for Atlanta’s offense.

And despite finishing second in offensive efficiency last season, with its best offense in nearly 15 years, Atlanta ranked 20th in points scored from the paint and outright last in fast-break scoring, per NBA.com. Any success the Hawks had near the rim in 2021-22 came by way of Young’s knack for creating points for himself and others – he led the league in lob assists for the second straight season.

By adding Murray — who ranked eighth among all players in kickout 3-pointers assisted on (95) in 2021-22, and whose 303 assist opportunities created in the restricted area ranked 12th among all players — the Hawks are hoping to bolster both areas of their offense, maintaining an effective attack while getting creative with Young’s involvement.

Fully integrating Murray is still a work in progress. Murray sports a usage rate just north of 25 percent through his first eight games with Atlanta, which still trails Young (34.7 percent) considerably for the team lead. So how can Atlanta create a finer balance while keeping the elements that worked well in the past?

Murray’s ability to create offense for his new teammates could grant the Hawks more room to weaponize the attention Young warrants from opponents. During his preseason debut with Atlanta, Murray whipped a pass to Collins after the latter provided a slip screen prior to rolling to the rim. Having Young hang out in the corner with viable roll threats should — in theory — give opposing defenses fits if other Hawks can credibly space the floor.

And the biggest variable in spacing the floor, of course, is actually hitting shots from deep.

Here, Murray and Young team up on a long-range connection during a recent game against the Toronto Raptors. Murray, who leads the Hawks with 45.0 passes per game this season, drives off a screen and draws multiple defenders before whipping the ball across the court. Meanwhile, the Raptors lose track of Young on the weak side, and he drifts into the corner for an open look — something that had been a rarity for Young in his first four seasons. (He had made only 48 corner threes in his career before this season.)

Atlanta will need its upgraded backcourt to continue refining approaches to creating for one another and their fellow Hawks. Young’s scoring average thus far remains quite high (27.5 PPG),1 but his overall efficiency (a career- and team-worst 44.1 effective field goal percentage) has not yet rounded into form. Fortunately, though, Murray has done his part in making life easier for Young. The latter’s effective field-goal percentage improves to over 66 percent on passes from Murray this season. (That’s also part of a larger trend for Murray — so far this season, he’s tied for sixth in the league with shooters logging a 67.5 percent effective field-goal percentage on catch-and-shoot looks off his passes.)

The Hawks are relying on Murray finding chemistry with the team’s interior scoring threats as well. Capela (first with 204) and Collins (eighth, 102) rank within the top 10 among all players in lobs finished over the past two seasons. Having access to such effective finishers will mark a new experience for Murray – he made only five lob pass attempts in that same span – but his ability to get downhill and attack the paint should help him adjust.

There are plenty of other ways Murray can affect the Hawks’ bottom line, of course.

In his final season with the San Antonio Spurs, Murray joined Michael Jordan (1988-89) and Magic Johnson (1980-81) as the only NBA players to average at least 20 points, eight rebounds, eight assists and two steals per game over an entire season. He will be called upon to help improve Atlanta’s 26th-place finish on defense last season, compensating for Young at that end of the court with his quick hands — a league-best 271 deflections last season, per NBA.com — and ability to generate chances in transition. (Atlanta finished 21st among all teams in points scored off turnovers last season.)

Murray’s impact as one of the league’s premier two-way threats is being felt in the early going: The Hawks’ net rating inflates by a team-high 32.4 points with Murray on the court compared to when he sits, including a 21.3-point swing on defense, per NBA.com.

That elevation in performance with Murray on the court goes a long way toward explaining why, despite the Hawks having regressed from a conference finalist to play-in squad over the past two years, Young is confident Murray can help convert Atlanta’s potential on paper into victories on the court — even if it means his personal numbers will be affected as the team implements a new cornerstone.

“Obviously, what I’ma be based off of is winning games, winning championships” Young explained during Hawks media day in September. “Stats don’t do enough. So, for me, that’s been my focus from day one, since I got drafted — and it still is to this day.”

“I’m just trying to win, and with them getting Dejounte, understanding where we were at the end of the season — the playoffs — and knowing what we needed to do to get better, I think, really just showed their commitment to winning.”

The Museum of Cycladic Art in Athens Kicks Off a Controversial Deal to Show 15 Ancient Artifacts From U.S. Billionaire Leonard Stern’s Collection