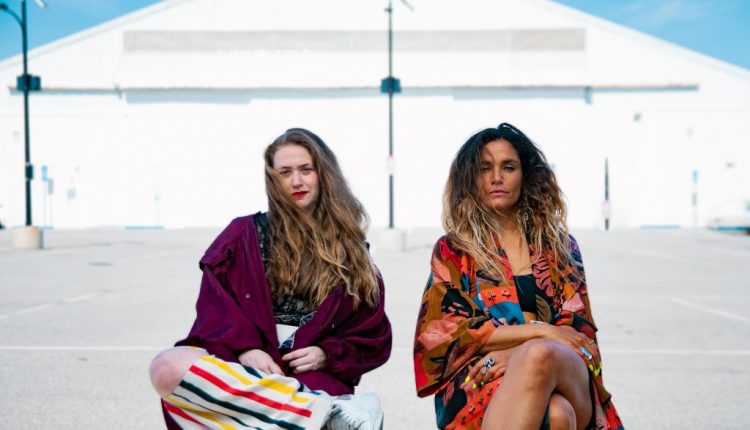 Given the creative synergy between curator Zoe Lukov and cultural producer Abby Pucker, you might assume they are old friends. The duo met merely a year ago, however, when Pucker visited Lukov’s group show “Skin in the Game” during Art Basel Miami Beach. It featured works by emerging and established artists—from Lynda Benglis, Derrick Adams, and Theaster Gates to Moise Salazar, Kennedy Yanko, and Erin M. Riley—at a South Beach storefront.

“The curation was everything—from the way it united people from different backgrounds in a not-so-precious space, to the wall text, which was not trying to be high-minded to prove how smart Zoe was,” said Pucker.

Meanwhile, Lukov said, “Abby understood from the jump my interest in making art accessible by lowering the barriers for entry and working with local communities.” An installation view of “Skin in the Game” in Chicago, with works by artists including Raúl de Nieves and Agustina Woodgate. Photo: Kim Kovacik.

The friends tested the waters of collaboration in April at EXPO Chicago, re-staging “Skin in the Game” across a multi-story industrial space in the Fulton Market district. And now, they are making their partnership official with the launch of a nonprofit: Art in Common.

They had both been in the process of pivoting: After spearheading the art program for Faena Hotels in Miami Beach, Lukov moved to Los Angeles and branched out into film, producing a documentary on Desert X (she sits on the exhibition’s founding board). And Pucker, whose background is in film production, and who is a member of Chicago’s philanthropist Pritzker family, has been producing more cultural projects with a focus on civic engagement, in an effort to amplify the Windy City’s art community.

“Artists feel like they might have to move to the coasts to have careers,” Pucker said. With Art in Common, a malleable and moveable new exhibition model, she and Lukov are hoping to help to change that. Nicolette Mishkan, The Protection Circle (2022). Courtesy of the artist.

It is set to launch with “Boil, Toil + Trouble” (November 29–December 11, 2022), a group show they are staging in a disused Design District retail space during Art Basel Miami Beach. With a multigenerational mix of big names (think Marina Abramović, Nicole Eisenman, Wangechi Mutu, Bruce Nauman) as well as up-and-comers (Armani Howard, Nicolette Mishkan, Jamilah Sabur, Hiba Schahbaz), the exhibition will take water as its theme—and, Lukov said, “our fears, fantasies, and desires about witches as misunderstood and now-reclaimed icons.”

Expect a handful of special commissions, including a sculptural fountain celebrating the mermaid by Nereida Patricia (Lukov and Pucker arranged for the artist to produce it at Miami’s Fountainhead residency). Meanwhile, Guadalupe Maravilla will exhibit a new work focused on the healing power of water, and Abramović will have a participatory installation, Spirit Cooking, inviting visitors to drink water from a blown crystal jug with amethyst crystals, complete with a “recipe” for how to sip. Eschewing the sterility of institutional settings, the duo aims to engage visitors through dramatic installations and site-specific performances in non-conventional venues. And free from the financial pressures of commercial shows, Art in Common is set to shake up the dynamics between the commercial and nonprofit realms.

At a Lukov-and-Pucker opening, you can expect DJs, dancing, lots of food, and art that makes a statement. Their previous show featured Brendan Fernandes sculptures inspired by bondage and ballet, activated by the gently provocative movements of dancers. And, commenting on the stigmatization of female sexuality, the public was invited to place artist Micol Hebron‘s male-nipple pasties on women’s breasts.

After Art Basel, “Boil, Toil + Trouble” is set to travel to Frieze Los Angeles (February 13–27, 2023) as well as EXPO Chicago (April 12–26, 2023). While the art will remain largely the same, Lukov and Pucker plan to adapt the exhibition along the way, “so each experience will be particular through different activations, performances, and installations,” Lukov said. A scene from the opening of “Skin in the Game” in Chicago, with sculptural works by Lynda Benglis and Brendan Fernandes (the latter activated with a performance), paintings by Derrick Adams and Marilyn Minter, an Agustina Woodgate wall tapestry, and a DJ. Photo: Kim Kovacik.

Moreover, they hope to invigorate the host cities’ cultural, social, and financial sectors while engaging with their communities. To stage “Skin in the Game,” for example, they partnered with local organizations—both nonprofit and commercial—from Miami’s members-based arts patronage program Commissioner to Chicago’s Black and LGTBQI+-focused cultural production organization Small World Collective.

Above all, Lukov said, their goal for Art in Common is to “create a platform for responding to art in our own way”—and, Pucker added, “a space for art to speak to people who may not even be aware that art is speaking to them.” Why Is Video Art So Difficult to Watch Sometimes? [Cartoon]