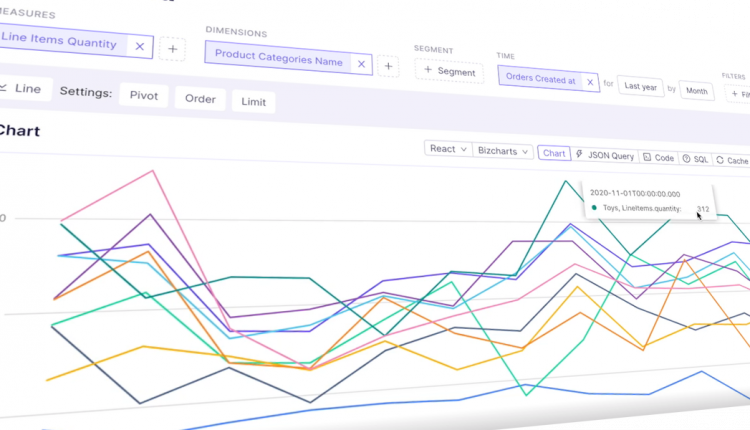 Cube Dev, the company and core developer behind the open source “analytical API platform” Cube.js, today announced it has raised $15.5 million in a series A round of funding to bring its first commercial product to market.

“Big data” can offer businesses a treasure trove of valuable insights, as pooling data from CRM, marketing, and customer support platforms unlocks consumer purchasing trends that would not be possible with separate data silos. Achieving this might involve an “extract, load, transform” (ELT) approach, meshing data ingestion and integration tools with cloud-based data warehouses such as Snowflake or BigQuery to mold the data into a standard format for easier analysis. But how do companies actually leverage this data to create internal business intelligence dashboards or add analytics to existing customer applications? This is where Cube.js comes into play.

Let’s take an example of a consumer finance app that allows its users to dig down into their spending and transaction history through charts and graphs. In a proprietary world, the app developer might elect to license a chart interface from a business intelligence (BI) vendor such as Looker or Tableau. But with a per-user pricing model, things can start to get pretty expensive at scale, while limited customization options can make the design and layout less cogent and “on-brand.”

“Because of this, when a company wants to build a data analytics app, they typically undertake all of the complex steps required to access, transform, and serve data from their cloud data warehouse into their front end,” Cube Dev cofounder and CEO Artyom Keydunov told VentureBeat.

In a nutshell, Cube.js serves developers the backend infrastructure that connects their aggregated and transformed data to the end-user visualizations.  It’s designed to circumvent many technical barriers — such as SQL generation, caching, API design, query orchestration and acceleration, security, and more — by positioning itself as a “headless abstraction layer” between the data warehouses and application.

“Cube.js replaces several manual steps that developers have to take regardless of the vendors in their stack,” Keydunov said. “We frequently refer to Cube as the ‘API layer’ between the warehouse and the application.”

Cube.js ships with app templates for building a dashboard application on top of a data warehouse, using various open source libraries and tools.

And then there is the Cube.js developer playground, a web-based tool for generating and viewing data schema, building and executing queries against a data warehouse, and plotting the results.

Above: Cube.js: building a query and plotting the results in developer playground:

In short, Cube.js helps companies “translate big data” into data-powered applications by taking a lot of the spadework out of the data engineering process while giving developers more design and development flexibility.

“Companies have already used the open source Cube.js library to build applications on top of data from cloud data warehouses like BigQuery and Snowflake because it saves them months’ worth of time versus building their own semantic and caching layers on top of a big data store,” Keydunov explained.

To further develop and commercialize the Cube.js open source project, Cube Dev is using its fresh capital to develop a cloud-hosed SaaS version of Cube.js in conjunction with “select customers.” This will serve as a “fully managed API layer” for building data apps on any cloud. Keydunov said he expects to launch Cube Cloud later in 2021 but wasn’t at liberty to share many additional details about the product.

The story so far

Cube.js’ origins can be traced back to 2016, when Keydunov and cofounder Pavel Tiunov were working on a previous business intelligence startup called Statsbot. In the intervening years, the duo saw enough developer demand for Cube.js to release it under an open source license in 2019, and it has since garnered users from major companies, including IBM, PayPal, Intuit, and F5. Based on this traction, Keydunov and Tiunov elected to transition their full focus to Cube Dev last summer.

Cube Dev’s series A round was led by Decibel, with participation from Bain Capital Ventures, Betaworks, and Eniac Ventures. The company had previously raised $6.2 million via a seed round of funding last September.

Art Industry News: The Late Artist Christo’s Team Is Working ‘Around the Clock’ to Wrap the Arc de Triomphe by Fall + Other Stories