Casual Vibes and an Absence of Fireworks Marked Christie’s $82.2 Million Evening Sale of Modern and Contemporary Art in London 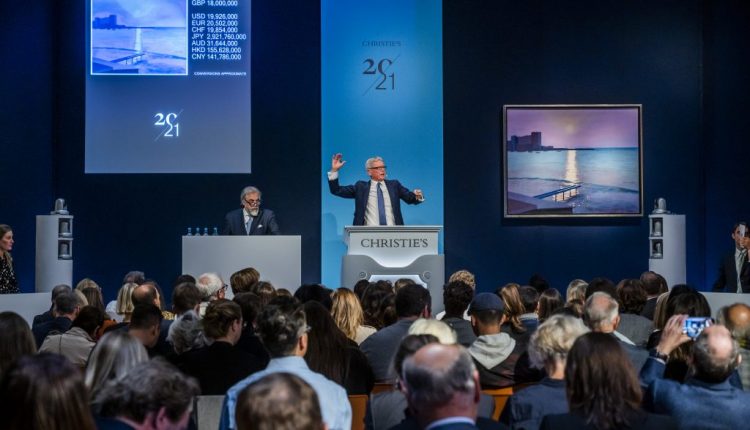 Christie’s kicked off its Frieze Week evening sale in London with a haunting portrait of the U.K.’s deceased monarchs Queen Elizabeth II and Prince Phillip, which hammered £20,000 ($22,000) under its £150,000 low estimate, setting the stage for a lackluster sale.

In what has become normal for auctions post-pandemic, the sale was a hybrid in-person and online event, with several cameras capturing the proceedings to be streamed online, and a 2 p.m. timing, meaning there was a more casual feel among attendees in the sale room.

But in an uncertain retail environment the house was happy to forego the glitz that used to accompany these events in exchange for being able to capture bidders in Hong Kong after dinner and New Yorkers at the breakfast table, particularly given the strong position of the dollar right now to the GBP.

The sale totaled £72.5 million ($82.2 million), above its £40.5 million to £55.8 million pre-sale estimate, though it should be noted that final prices include buyer’s premium unless otherwise noted, while pre-sale estimates do not. It also outperformed last year’s £64.5 million total for the equivalent sale, though that sale had seven fewer lots.

Three lots were withdrawn ahead of the 47 lot sale, paintings by Urs Fischer and Peter Doig, and a KAWS sculpture, wiping somewhere between £3.75 million to £4.85 million off the map. During the sale, 62 percent of bidding came from Europe, Middle East, and Africa, and 23 percent from Asia Pacific. Perhaps surprisingly given the favorable exchange rate for the dollar, just 15 percent was from the Americas.

The top lot of the sale was an unusual early career David Hockney painting executed in the late ‘60s, a Mediterranean sunrise in a pink and purple color palette, which head of sale Tessa Lord said was “in its bare roots a study of light on water, which is the essence of Hockney’s practice.” She added that it might particularly appeal because of its wall-friendly size. Mickalene Thomas, All I Want is a Fighting Chance (2006). Courtesy of Christie’s Images, Ltd.

The consignor acquired it from Christie’s New York in 1988 for $352,000. Holding onto it paid off, as the work—which was backed by a third party guarantee—hammered at £18 million, well beyond its £10 million upper estimate. Specialists on the phones competed for a good five minutes, with the winning lot falling to a bidder on the phone with Cristian Albu, who is now based in Hong Kong.

There was an excitement of bidding for Scott Kahn’s 1992 Croquet, with 12 phone bidders lined up, ended up going for 6.3 times its low estimate, hammering at £630,000. More buzz came around the sale of a small work on paper by Yoshitoma Nara from the Belgian Le Jeune collection, which vaulted to £700,000, neatly doubling its high estimate.

The sale had an almost soap opera feel as observers (both in person and online) watched as specialist Xin-Li (who secured more than a few lots for her bidders tonight) was pipped to the post by Martha Meshoulam, an evening sale cataloguer who secured the treasure for her client, which also happened to be her first-ever sale. There was applause in the room for Tracey Emin, who consigned a new painting directly to the sale to raise funds for her residency program in Margate. The acrylic on canvas, Like A Cloud of Blood (2022), hammered at £1.9 million, nearly four times its low estimate after vigorous bidding in the room and on the phones, landing with a couple bidding in the room.

The same “distinguished American” collection consigned works by ultra-contemporary stars Christina Quarles, Shara Hughes, Rashid Johnson, Dana Schutz, and Mickalene Thomas (all of which were guaranteed in house). The best performer of the lot was Johnson’s black soap and wax Untitled Anxious Audience (2016), which made £700,000—right on its low estimate. And the worst was the Thomas work, which hammered at £45,000, well below its low estimate of £120,000.

Elsewhere in the ultra-contemporary category, a 2009 painting by Adrian Ghenie, who is the star of an exhibition at Thaddaeus Ropac gallery this week, hammered on its low estimate at £2.2 million. (It was also backed by a third party guarantee).

And possibly hoping to capitalize on the buzz around Lucian Freud’s centenary—he’s currently the subject of a major exhibition at the National Gallery—two diminutive drawings by Freud, once gifted to his girlfriend Lorna Garman Wishart, hammered for a combined £310,000. More disappointing was the result for Freud’s contemporary Francis Bacon, whose Painting 1990 hammered at £5.9 million, well below its £7 million low estimate, and the result is perhaps the most telling high-value lot of the night, as it did not carry a guarantee.

The main evening auction was followed by the sale of Robert Devereux’s collection of contemporary African art, which totaled £2.9 million, above its £2.7 million pre-sale upper estimate (the top lot was a painting by Lynette Yiadom-Boakye, which made £1.5 million, more than double its lower estimate.)

The first of the Big Three to hold its sale this week, Christie’s sale was without fireworks but was without huge disasters either, and as auctioneer and Christie’s global president Jussi Pylkkänen pointed out, all works in the sale sold despite the financial headwinds, which he said “gives you an indication of how important this week in London is and the energy we have here.”

Whether the solid performance will continue as Sotheby’s and Phillips follow suit tomorrow with their evening sales remains to be seen.

The SEC Is Investigating Yuga Labs, Creator of the Bored Ape Yacht Club, to Decide If NFTs Should be Regulated Like Stocks

French Authorities Say They Have Nabbed a Youth Cyber-Gang That Stole $2.5 Million in NFTs