Can The Warriors Keep Breaking The Rules Of NBA Title Contention? 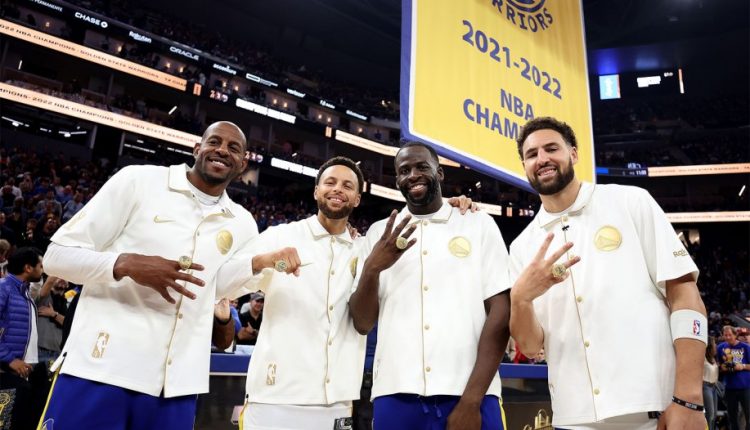 As the Golden State Warriors embark on their fourth title defense in eight years, they are also trying to do something even more remarkable: bridge two eras together.

From 2014-15 through 2018-19, the Warriors were by far the best team in basketball: They won 44 more regular-season games than any other team during that span, setting a new NBA record for single-season wins along the way. They also made the NBA Finals five times in a row, winning three of them. But at the end of that 2018-19 season, it looked like the Warriors’ dynasty — such as it was — was coming to a close. During that playoff run, which ended in a loss to the Toronto Raptors in the 2019 NBA Finals, we were running stories with headlines like, “How The Warriors Blew A 31-Point Lead,” “The Warriors Are Leaning Into The Death Lineup — And It’s Not Working” and “The Raptors Are One Win Away From Ending The Warriors’ Dynasty.”

So after the Warriors not only lost to Toronto but also suffered major personnel losses through a combination of severe injuries, retirements and free-agent departures, we declared that the Warriors had “lost their religion.” And when Stephen Curry broke his hand early the following season and Golden State limped to a 15-50 finish before being left out of the NBA bubble entirely, and then Thompson tore his Achilles while rehabbing the ACL tear and the Warriors failed to make it out of the play-in round in 2021, it looked a whole lot like this group’s days of contending might be kaput.

Of course, that’s not how things worked out. The Dubs returned with a vengeance last season, looking like one of the very best teams in the NBA from the jump. Despite some bumps and bruises along the way — a multi-week injury to Draymond Green here, the first extended shooting slump of Curry’s career there — Golden State bulldozed its way through the Western Conference playoffs and then dispatched the Boston Celtics to capture what Steve Kerr called his team’s most unlikely title victory yet.

Now the question becomes whether the Warriors can remain among the sport’s inner-circle contenders as their Steph-Klay-Draymond core ages, and if so, how long the next generation — Andrew Wiggins, Jordan Poole, James Wiseman, Jonathan Kuminga, Moses Moody, etc. — can help keep them there. While the Warriors project to be among the league’s elite teams this season, history suggests it could be surprisingly tough for them to go on another sustained, multi-year run of contention so soon after their previous one ended.

How do we know that? Well, we took a look back at modern NBA history (since the 1976-77 ABA-NBA merger) to determine when a team’s window of title contention actually opens, how long those windows remain open before closing, and how long it takes teams to reopen a window once a previous one had closed.

To do this, we first had to establish what actually constituted an open “window.” We decided that making the conference finals was a pretty good barometer of true title contention. If you have a chance to win your conference, you have a shot to win the title. But of course, we wanted to capture the cases of  the occasional teams that do not make it to the conference finals but are still clearly among the best teams in the league that season. So, a team’s title window was also considered open if it met four of the following five benchmarks:

We also considered a window to be open unless a previously contending team failed to qualify for two consecutive seasons. For example, the Miami Heat went to the NBA Finals in 2020 and returned to the Eastern Conference Finals in 2022 but lost in the first round of the 2021 playoffs. Should those 2020 and 2022 teams really be considered part of separate title windows? We don’t think so. But if the Chicago Bulls are contenders from 1989 through 1993, then Michael Jordan retires for a year and a half and then they’re contenders (and then some) from 1996 through 1998, that counts as two distinct title windows.1

Given those rules, here’s a list of all the open title windows for each franchise since the merger:

The average window has remained open for only 2.91 years, though, and the average team has taken 7.83 seasons to get back into contention after a window closes. And that doesn’t even include teams still waiting to reopen their window right now. For example, it’s been 43 seasons since the Wizards last qualified for contender status, 22 since the Knicks did, 19 since the Nets did, 18 since the Kings did and 14 since the Pistons did. If we count the droughts still open, the average team has taken 8.21 years — and counting — to get back into contention.

Of course, the Warriors are no average team. Their title window lasted five seasons before it shut (nearly double the typical length), and they’ve already won another championship in what we’re considering a new window, just three seasons after their previous one closed. (So much for waiting nearly a decade to contend.)

Perhaps a better historical comparison for Golden State are the teams coming off sustained runs of contention.

Of the aforementioned 89 title windows, 35 were open for just a single season.2 That leaves 54 multi-year title windows to look at; after those closed, it took teams an average of 7.03 years to re-emerge as contenders.3 So the Warriors are well ahead of that schedule as well.

However, the Warriors were not just any multi-year title contender, either. Their run lasted a while, and yielded three championships. Among the 54 title windows that lasted multiple seasons, just 18 remained open for five or more years, like the Warriors’ did from 2014-15 through 2018-19.4 And the history of that group truly underscores how remarkable the Warriors’ fast return to glory has been. Although teams coming off a five-plus-year run of contention have actually gotten back into the mix faster than the average team, those teams have still taken an average of seven years to reestablish themselves as contenders. And that’s without including the Pistons, Raptors, Thunder and Spurs, whose droughts remain open.

Additionally, among the 17 contenders that had a five-plus-year window close, only the 1990s Bulls and the 1991 Celtics reopened their window after two years or fewer before the Warriors did so last season. The Bulls’ next run lasted until Jordan retired for a second time and the team was unceremoniously broken up, while the Celtics had just that 1991 season — Larry Bird’s last playing at least 50 games — before they went through a 10-year drought.

In other words, it is really freaking difficult to keep contending in the NBA, and it’s even more difficult to bridge one long title window to another, like the Warriors are trying to do.

The only team that has successfully done something remotely like that is the Spurs. They were fringe contenders early in the David Robinson era, qualifying through our secondary criteria in 1994 and 1996 and making the conference finals in 1995, but they had a disastrous 1996-97 season in which Robinson played only six games before going down with an injury. However, it just so happened that during that season, team president Gregg Popovich fired coach Bob Hill and took over the job himself, then the Spurs landed Tim Duncan with the No. 1 overall pick, helping them embark on a 19-year (!) title window — by far the longest in our database.

Robinson bridged the era to Duncan, who later bridged eras to Tony Parker and Manu Ginobili, who then bridged it to Kawhi Leonard.5 That seems a lot like the plan for Golden State, and it’s notable that Kerr has roots with those San Antonio teams, having played there for four seasons. Curry, Thompson and Green are being counted on to not just carry this year’s team, but to pass the torch at some point down the line. That point likely won’t come this season, but given the contracts that Wiggins and Poole signed in recent days, the Warriors surely envision it coming in the near future. It won’t be easy to replicate the Spurs’ success, but Golden State is used to making the improbable look easy by now.