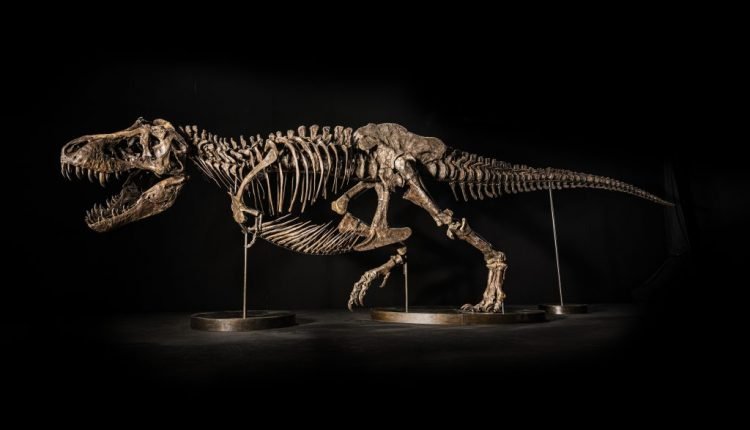 After spending millennia underground, dinosaurs have recently been enjoying their time in the sun. Now, Christie’s Hong Kong is bringing a full Tyrannosaurus rex skeleton to auction in Asia for the first time. “Shen the T. rex,” as the specimen is called, will star in their 20th/21st Century Art Evening Sale on November 30 alongside work by Yayoi Kusama. The fossil is expected to fetch $15 million to $25 million.

“We have witnessed a growing demand in the region for objects of historical significance,” said Francis Belin, the president of Christie’s Asia Pacific, in a statement. The auction house in face broke the world record for a fossil at auction with the sale of the similarly named “Stan the T. rex” (maybe they were cousins?), for more than $31 million in October 2020.

At the same time as the sale, the dino-mania continues at Hong Kong’s Science Museum in an unrelated exhibition called “The Big Eight—Dinosaur Revelation.” Details of the claws on Shen the T. rex.

Hailing from the Cretaceous Period (68 million–66 million years ago), Shen was discovered in McCone County, Montana. The specimen measures 43 feet long, 16 feet tall, 7 feet wide, and weighs over 3,000 pounds, with 54 percent bone density. The museum-quality skeleton is “dynamically poised as though in the midst of a hunt,” according to the auction house, “in a scientifically accurate pose epitomizing the T. rex’s infamous ferocity.”

Last month, Nicolai Frahm, an art advisor who has helped to bring dinosaur bones to auction, including the raptor Christie’s just sold for $12 million, told Artnet News that not only is the U.S. home to some of the world’s best fossils, but public policy helps them reach the market.

“You can also have strong examples from Asia and other countries,” Frahm added, “but you’re not allowed to keep and own them because those belong to the state.” A detail of the teeth on Shen the T. rex.

Auction houses’ increased interest in dinosaur bones has, however, sparked criticism from the scientific community. After Sotheby’s sold the skeleton of a rare Gorgosaurus for $6 million this summer, Thomas Carr, a paleontologist from Carthage College said the specimen “no longer exists to scientists anymore.”

Carr and his peers have asserted that fossilized remains should remain with academic institutions, but some art insiders disagree. Sotheby’s SVP Cassandra Hatton told Artnet News that “private collectors play a critical role in the distribution of objects to museum collections.” Frahm noted that “specimens would probably never get uncovered had it not been for people who are wiling to pay big prices for them.”

Perhaps that is why Christie’s specifies that Shen has already been studied by paleontologists from the University of Manchester, and will go on view to the public before hitting the auction. Its debut will be at the Victoria Theatre & Concert Hall in Singapore, from October 28–30, then at the Hong Kong Convention and Exhibition Centre, from November 26–30.