Before Netflix, Warhol Tapped Into the Tragic Mythos of Marilyn Monroe—Here Are 3 Things You Might Not Know About His Iconic Works 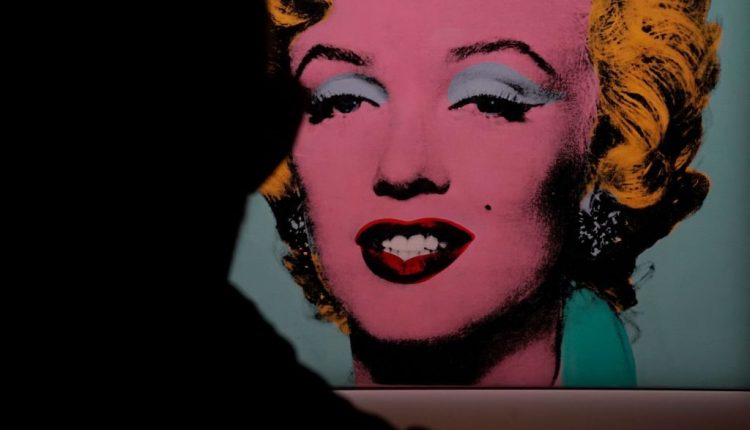 Around a third of the way into Blonde, the Netflix movie about Marilyn Monroe released last month, a graphic ménage à trois fades into a trailer for the actor’s 1953 film, Niagara. “Take me, take me in your arms,” Ana de Armas croons seductively as Monroe, her platinum hair coiffed to mimic the iconic bombshell. With the camera framing her face like a portrait, de Armas could almost be posing for Monroe’s publicity shot for the film—the one now far better known for its cameo in a Pop series by Andy Warhol.

In August 1962, the same month that Monroe died of a sleeping pill overdose, Warhol sorted through his collection of photos of her and picked the publicity shot for Niagara taken by 20th Century Fox photographer Gene Korman (aka Eugene Kornman). The Pop artist had just started making silkscreens that month, and the tragic blonde celebrity seemed like the ideal subject. “When Marilyn Monroe happened to die that month, I got the idea to make screens of her beautiful face — the first Marilyns,” Warhol said. “You get the same image, slightly different each time. It was all so simple, quick, and chancy. I was thrilled with it.”

Warhol cropped the photograph, closing in tightly around Monroe’s signature look of blonde curls, dark eyebrows, sultry lips, and a beauty mark. He then silkscreened the colors and silhouette slightly off-kilter, highlighting the imperfections of this commercial medium and packaging Monroe as a product (no different than a can of soup).

Warhol and Monroe have been synonymous ever since, especially since the artist’s earliest Marilyn silkscreens helped launch his success when they starred in his first major New York solo show, at New York’s Stable Gallery in November 1962. You’ve probably seen Warhol’s Marilyns everywhere and on repeat, but here are three things you might not know about these candy-colored portraits.

If Marilyn’s collar looks familiar, you may have seen it on the first cover of Playboy When magazine publisher Hugh Hefner printed the debut issue of Playboy in late 1953, he famously ran a nude Marilyn centerfold bought from a pinup photographer (who took it back when the actor was strapped for cash). She graced the cover too, in a photo of her waving at crowds from the back seat of a convertible as part of the parade for the 1952 Miss America beauty pageant in Atlantic City.

Monroe is notorious for the white halter dress she wore in The Seven Year Itch (1955) that floated up when she stood above a drafty subway grate, but she also donned a distinctively collared halter dress for at least two high-profile appearances. She wore this black dress with a plunging neckline and white sailor collar to the 1952 Miss America pageant, and again the following year when posing for Korman’s publicity shots for Niagara.

In effect, Hefner and Warhol chose different images of Monroe wearing the same low-cut dress to make themselves famous—yet, unsurprisingly, paid her nothing. One became a pornography mogul and the other a Pop art legend but she (and her estate) gained nothing from it, adding to the general tragedy of Marilyn Monroe that hers was a world of men who profited off her appearance. Warhol started the largest of his early Monroe artworks, Marilyn Diptych (1962), in the months after she died. Her face repeats a dizzying 50 times across two panels—one brightly colored in yellow, pink, and blue, and the other in black silhouette over silver. The diptych format winks at traditional Christian iconography, but instead of depicting the Holy Trinity or a Madonna with Child, Warhol portrays an idolized celebrity. This wasn’t the only time he elevated Monroe to religious icon status—his Gold Marilyn (1962) from the same year envelops a small silkscreened portrait of her in a suffocating halo of metallic gold paint.

But Warhol didn’t conceive of this now-revered diptych as a pair. It was collector and art director Emily Hall Tremaine’s idea.

Tremaine and her husband, Burton, visited Warhol’s studio on Lexington Avenue in 1962. The still-emerging artist didn’t have a dealer yet, and was selling artworks himself. “He seemed shy and it took a bit of coaxing before he showed us everything,” Tremaine later recalled. “He first showed us the black Marilyns, and several pictures later the colored one appeared. I said I thought they should be presented as a diptych, Andy replied ‘gee whiz yes’ so he brought back the black one, stood it next to the colored one and we all saw we had achieved a very complex and moving statement about Marilyn, so I really felt I was a collaborator!” The Tremaines bought them both, and they’ve been a single artwork ever since. Warhol’s Shot Sage Blue Marilyn (1964) made headlines earlier this year when it sold at Christie’s for more than $195m (including fees), making it the most expensive 20th-century artwork and most expensive work by an American artist ever sold at auction. Part of the reason why this portrait is so prized is right there in the title—this Marilyn was shot. With a pistol.

In September 1964, as Warhol was finishing a series of five 40 x 40-inch Marilyns, he met East Village performance artist Dorothy Podber at a party. “Can I shoot you?” he asked her, and she agreed on the condition that she could “shoot” him, too. Likely believing that Podber would be taking snapshots, Warhol welcomed her into his Factory soon after. She showed up with white gloves, a Great Dane called Carmen Miranda, and a gun in her purse, and shot four of the freshly minted Marilyns, which were leaning against a wall.

A shocked Warhol later had the canvases restored, but their fiery backstory is part of their lore—and also, evidently, their value. Shot Orange Marilyn from the series allegedly sold for even more than its Sage Blue counterpart, when Ken Griffin bought it for $240 million at a private 2017 sale of the estate of publisher Si Newhouse.

Warhol’s work was often based on techniques used for mass production, but Podber’s gunshots turned a handful of these silkscreens into unique objects.

What Can a Major Museum Show of Lucian Freud Tell Us About His Market? As It Turns Out, Quite a Lot