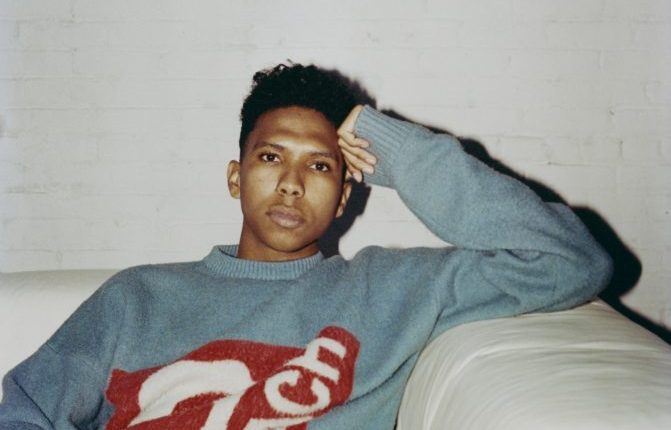 Tyler Mitchell has unveiled his latest portraits of Black utopia at Gagosian Davies Street, marking his first solo exhibition in the U.K., and setting the stage for a busy season in London ahead for the artist.

On view through November 12, the photographs in “chrysalis,” propose a counter-narrative for Black folks, which erases historical trauma, capturing youthful Black bodies in an idyll of nature and leisure, playfully surreal and serene.

From the Greek origin khrysallis, the name denotes the stage in a butterfly’s life cycle where, enclosed within a cocoon, a metamorphosis and maturation take place before it emerges in its final form.

It speaks to the essence of Mitchell’s show, which depicts Black men and women at the cusp of adulthood, and also finds a parallel in the artist’s career—Mitchell has rapidly matured since his debut as a commercial photographer in 2018, and is now a respected voice in conceptual photography, whose work will adorn walls at Frieze Masters, Saatchi Gallery and the Victoria and Albert Museum, all before the end of the season. The photographs capture protagonists simultaneously poised and relaxed, whether in positions of rest, recline, and suspension, or mid-movement; swimming, splashing, and playing with the natural elements of land, sky and water. “Collectively, these become the figments of an imaginative and psychic state of being, one in which radiance, resistance, restraint, comfort, and full agency exist,” Mitchell said of his work in a press statement.

Part imagination, part reality, Mitchell’s cinematic dreamscapes create a space where Black-skinned bodies are free to exist in a way that they cannot always in contemporary America, positioning themselves joyfully in any scenario they please, unencumbered by social prejudice.

In Cage, a young Black woman lies, debonair, propped up by her elbows on the grass, legs crossed nonchalantly in the air, against a painted backdrop of garden enclosed within a white-picket fence. In A Glint of Possibility, a young male figure suspends from a tire swing, resting in equilibrium as he contemplates his reverberating reflection in the surface of a lake, while Treading shows a boy’s head emerging from the water, flanked by a cluster of balloons. Though surreal, Mitchell’s illusory world constructs an optimistic vision, of subjects existing freely in the outdoor space, of a carefree and dreaming youth denied many due to historical, economic, and social exclusion. No work exhibits this quite like Mitchell’s Simply Fragile. Depicting a bare-chested young man leaning aback on a patch of grass near bordering water, he fixates a downward gaze, cross-eyed, on a beetle fleetingly settled on the tip of his nose, expressing a moment of harmony.

“Tyler grew up in Atlanta, so he’s thinking about Black relationships to the land, historically and present, and how those relationships are both real and mythic,” gallery director Antwaun Sargent told Artnet News, adding that the artist is thinking about “the duality around Black identity, and how different movements, Black gestures, have been interpreted in very different ways.” Indeed, juxtaposed with these images of subjects in harmony with nature are smaller ones set in diptych pairings depicting figures wading, swimming, and struggling in muddy waters, emanating a palpable sense of danger, that pervades the experience of green spaces, asserting the need to remain vigilant, and not, for example, tread in someone else’s yard. In the expressionistic The Heart, Mitchell depicts a boy half-submerged under a layer of sediment, lying horizontally with his eyes closed shut. In Rapture, a hand reaches out of rippling muddy water, implying a sense of struggle.

As for the triptych Protect from all Elements, it concurrently calls upon elements of both harmony and struggle, as a figure pulls a painted sky backdrop to shroud a coffin-like structure containing tilled earth.

The exhibition has positioned Mitchell, who has become an established name in the U.S., to break out in London. He will be one of the central artists in Sargent’s exhibition “The New Black Vanguard,” at Saatchi Gallery, and later this week will debut new works in Regent Park as ”the first contemporary artist to be commissioned by Frieze Masters,” according to Sargent. Along with curating a night of art and cinema at the V&A, these elements well set the stage for what Sargent calls the “London takeover of one of the defining photographers of his generation.”

“Tyler Mitchell: Chrysalis” is on view through November 12 at Gagosian Davies Street, London.