As Georgia O’Keeffe’s Market Blooms, Christie’s Will Sell a Trove of Top-Notch Works by the Artist From Paul Allen’s Collection 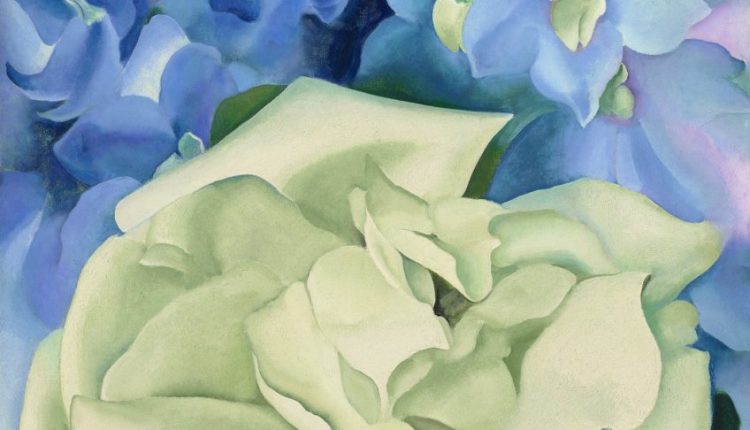 Amid the numerous trophies from the collection of Microsoft cofounder Paul Allen that are expected to pull in a staggering $1 billion at Christie’s this fall is a jewel-like trove of works by the American modernist Georgia O’Keeffe.

They may not come with the kind of eye-popping, eight-figure estimates that have been placed on works by Paul Cézanne and Jasper Johns. But they are sure to ignite excitement among O’Keeffe’s passionate following, which experts say has grown increasingly international in recent years.

Within the roughly 150-work collection headed for sale, there are four O’Keeffe paintings. The group is led by White Rose with Larkspur No. 1 (1927), which represents her most sought-after motif, the flower, and has an estimate of $6 million to $8 million. “What we see across the entire collection is that Mr. Allen was interested in the artists who were pioneers and really pushing the envelope, and O’Keeffe was certainly that,” Tylee Abbott, head of Christie’s American art department, told Artnet News. “She was bringing Modernism to America in a big way and making it her own.”

The artist and entrepreneur share ties to New Mexico: O’Keeffe began spending part of each year in Taos and Santa Fe in 1929, while Allen and Bill Gates cofounded Microsoft in Albequerque in 1975 before relocating to Seattle. In the late 1990s, Allen purchased Sol y Sombra, the 20-acre estate outside of downtown Santa Fe where O’Keeffe lived toward the end of her life. It’s now on the market for $17.5 million, according to Robb Report.

White Rose is one of a series of five paintings from 1927, with other versions owned by the Museum of Fine Arts, Boston, the O’Keeffe Museum in Santa Fe, and the Art Institute of Chicago. O’Keeffe has long been recognized as a pioneering figure, but her market has only begun to reflect her status over the past decade.

Right after O’Keeffe died, in 1986, prices for her work were expected to spike—but that didn’t happen, according to private dealer and American art expert Debra Force. Instead, the market remained a bit of a slow burn. “She has always been popular and had a mystique about her personality and who she was in addition to the quality of her art,” Force said.

The year 2014 marked a tipping point. A floral painting, Jimson weed/White flower no. 1 (1932), smashed a $15 million high estimate at Sotheby’s to sell for $44.4 million. It was snapped up by Walmart heiress and founder of Arkansas’s Crystal Bridges Museum Alice Walton. The result made a public splash and recalibrated the market for O’Keeffe. Prior to that year, her auction record, set back in 2001, was $6 million.

“At the time, and thinking about whether a gallery would have offered her work at a price of $45 million, I don’t think that would have happened at all,” said Force. “Now it’s the record price. It set the tone for other strong prices.”

Even though the second highest price at auction for an O’Keeffe is less than half of the record—A Street (1926) sold for $13.3 million at Sotheby’s New York in November 2018—the private market has accelerated, experts say. The O’Keeffe Museum in Santa Fe acquired Ritz Tower (1928) in a private transaction for a price that is rumored to be as much as 20 times the $1.2 million result it fetched at Christie’s back in 1992.

Experts attribute the spike in interest to a number of factors. Some buyers are re-evaluating the prices of work by women, who have been historically undervalued. Another reason for the strength? “From what I can gather, her work is being considered more by non-Americans than perhaps ever before,” Force said. “One of the reasons is the cross-marketing that the auction houses are doing, in terms of putting O’Keeffe in the major contemporary evening sales and exposing her work to international clients.”

Abbott noted that O’Keeffe’s name carries increasing weight in Asia, whereas in previous decades her audience was primarily those interested in traditional American art.

“It’s wonderful to see her appreciated on the world scale,” Abbott said.